Upfront News and Views: Ovation Stakes a Claim Sundays at 8 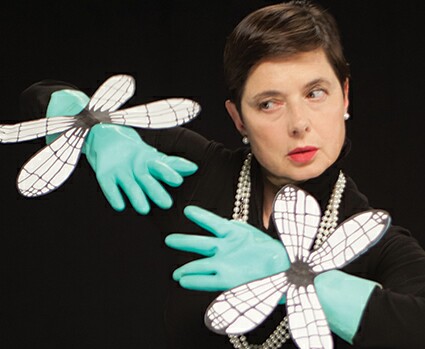 Venue: A plush screening room inside The Core Club on W. 55th St. between Park and Madison Avenue. Rows of long couches took up most of the space, with a trio of seats in front. Breakfast treats included eggs, bacon, teas and fruit salad, all served outside the room. Grade: 3 Jacks

Presentation: Facts about ad sales and new programming ahead were at a minimum by Executive Vice President of Programming Scott Woodward and Executive Vice President of Network Strategy Liz Janneman. Most of the time was turned over to an audience question-and-answer session about a trio of new efforts from actress Isabella Rossellini, photographer Mick Rock and culinary expert Ted Lee. Before they dished out answers, Janneman noted that Ovation’s arts format was now split center among male/female viewers, with total viewership up 43 percent over last spring. She added that one online-conducted survey found 57 percent of participants would buy a product off an Ovation-run message versus 48 percent from Bravo, 43 percent from BBC America and 54 percent from Sundance TV. Woodward's big point: Starting this month, new miniseries and specials will premiere Sunday nights at 8 p.m., in order to make Ovation more of an upscale viewer destination. Grade: 3.5 Jacks

News: “Green Porno Live!,” Isabella Rossellini's hour-long adaptation of her popular Web shorts, begins the Sunday stretch May 17, followed by “The Da Vinci Life” (countdown of culture groundbreakers in a chosen profession/June 7), “Southern Uncovered” (Ted Lee and brother Matthew looking for cuisine and culture in Atlanta, Louisville and other cities/June 14), “On the Rock” (Mick Rock's profile of pop music legends/August 7) and “Art Breakers” (art collectors at work/October 6). Under development for late 2015 or first half 2016: “Street Art Revival,” “The Gavel,” “Art Therapy” and “One Man's Trash.” Several scripted series are in the works as well as some performance specials. Grade: 3.5 Jacks

Host: Janneman and Woodward didn't waste time making points or passing off to Rossellini, Rock and Lee. All three were entertaining and fun to listen to. Grade: 3.5 Jacks

Overall Grade: 3.5 Jacks  Good change of pace from the other late March/April presentations geared to journalists.

Next up: BET Networks

Notes from the passing Upfront and Digital Content NewFront parade:

A&E Networks' annual upfront showcase, held for the second year in a row at Park Avenue Armory earlier this week, strangely became press non grata. Why the change of heart?

O Jacks to Refinery29 for not responding to press interest in attending its Digital Content NewFront Wednesday afternoon. What a shame, just hours after getting $50 million in funding from Scripps Networks Interactive and WPP. Like Vice, Refinery29 has big ambitions in the TV world, scripted series among them.

Another 0 Jacks to Sony PlayStation for its own no-press attitude to its NewFront earlier on Wednesday.

National Public Radio turned over a new leaf Wednesday afternoon, staging a get-together in Greenwich Village to highlight its growing Internet radio/podcast activity. We'll see what transpires out of it.