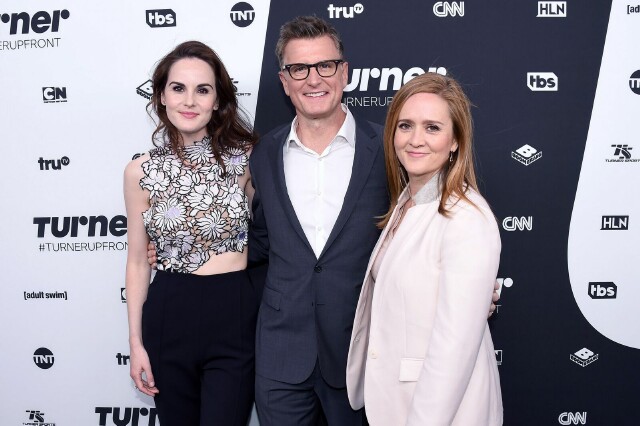 A year ago, Turner expanded its annual showcase for TBS and TNT to include the rest of its networks. More than 2,000 people returned to the scene of this conversion Wednesday morning for round two. The company did not disappoint: Executives and talent were out in force to thoroughly educate and excite the advertising community. (Kevin Reilly, President of TBS and TNT, Chief Creative Officer of Turner, is pictured above with Michelle Dockery of TNT’s "Good Behavior" and Samantha Bee of TBS's "Full Frontal with Samantha Bee.")

Venue: Madison Square Garden's theater space. The main lobby was decorated with an aquarium wall and a big blue ball with "T" on it. Inside the theater, the stage was divided into three areas, with raised platforms on both sides and two podiums at center. Black-and-white graphics and channel logos decorated the back wall. Grade: 3.5 Jacks

Presentation: Where many ceremonies mixed their new series and ad sales pitches with videos and humor, Turner's poured on the humor and concentrated most of the remaining time on one subject: cutting ad clutter, as in those breaks lasting up to five minutes or more, so viewers get a better experience. TBS, TNT and truTV resolved a few months ago to reduce ad time in various degrees this fall (such as for new series) with Viacom, A&E, National Geographic Channel and NBC (for its franchise "Saturday Night Live") announcing similar initiatives since. Turner Ad Sales President Donna Speciale called for both the TV and advertising industries to put their full muscle behind these actions and join in supporting many more via higher per-spot rates. New internal research shows reduced and shorter ad pods lead to a dramatically higher rate of consumer purchases. Also, when Turner cut two hours of pods in recent weeks, replacing them with either more show or native messages, viewers noticed, Speciale said. "The experience is everything," she added. "We need you, the ad community, to support these moves. It's critical for all of us. Let's work together to give consumers more of the shows they love, to give the creative community a better environment to tell their stories, and to help your brands win, too."  These may have been the most meaningful executive remarks of the week. (Pictured below, left to right, are John Martin, Chairman and CEO of Turner; Jeff Zucker, President of CNN Worldwide; Christina Miller, President and GM of Cartoon Network, Adult Swim & Boomerang; Coleman Breland, President of Turner Classic Movies and Turner Content Distribution; Donna Speciale, President of Turner Ad Sales; David Levy, President of Turner; Kevin Reilly; Lenny Daniels, President of Turner Sports, and Chris Linn, President of truTV.) Grade: 4.5 Jacks

News: "Will," the young Shakespeare drama Pivot greenlighted then mysteriously passed on several years ago, will finally resurface with 10 hour-long episodes on TNT next year. That channel will launch five new series in the coming months, including the highly-touted "The Alienist." New project "Civil" (about a new Civil War blowing up in our era) may be among them. TBS will launch eight new originals, including Conan O'Brien-produced "People of Earth" (aliens investigate our planet's culture) in October and dramedy "Search Party" in November. TruTV's group of newbies kicks off July 5 with pop-culture/comedy countdown "Greatest Ever," followed by "Lifescaping" later this summer and docu-com "John Glaser Loves Gear" this fall. Look for another live "Impractical Jokers" special this fall, plus a 90-minute take on "The Simpsons" character Apu from comedian Hari Kondabolu. Three new series will join CNN's primetime lineup: "Soundtracks," "History of Comedy" and "The Nineties." Coming down the road from Adult Swim: The revival of "Samurai Jack," "Dream Corp LLC" and "Million Dollar Extreme Presents World Peace." Once again this year, Cartoon Network's role was limited to an animated sketch (The Powerpuff Girls engaged in debate) and Boomerang was left out.  Later that night, the Adult Swim party once again became the toughest ticket of Upfront week. Grade: 4 Jacks

Hosts: Donna Speciale's delivery was tight and on point, while Kevin Reilly presented his portion with gusto. Grade: 4 Jacks

Star Time: Wave after wave of laughs in a variety of forms, starting with CNN anchorperson/presidential debate moderator Wolf Blitzer parodying his network's debate coverage helped by a "Drone-Cam," graphic one-liners masquerading as "Breaking News" and a town hall featuring O'Brien and “NBA on TNT” wraparound host Charles Barkley trading jabs at each other. O'Brien also jabbed at the process itself and some real supporters of CNN content -- Gold Bond medicated powder and Dr. Scholl's foot care. "It's nice to be at my 24th Upfront," O'Brien said. "Can you believe it? I've been here in New York and I've had to witness 24 Tony Danza series workouts. None of them worked." At one point, "Full Frontal" host Samantha Bee invited the crowd to invest $100,000 for attending the Republican National Convention. "It will be a peyote hallucination or the Super Bowl of election season ... and this election season was a f---ing gift from heaven," Bee gloated. Then along came Billy Eichner of truTV’s smash “Billy on the Street” to offer another laugh riot of a performance after scoring at the Hulu “Upfront” two weeks ago (in this same space). No one was safe from his barbs. "This presentation [which lasted one hour and 45 minutes] is just flying by,” he sneered. Here’s more: “What a treat to see 9/11 footage!”  “’Those Who Can't’ is all about a group of people trying to find truTV.” “TruTV is doing cruises now. That'll show Netflix!” “Is TV dead? Is that a stupid question? As stupid as not giving Samantha Bee ‘The Daily Show’ -- which was stupid." Grade: 5 Jacks

Cuisine: Just like Hulu two weeks ago, a breakfast diet of coffee, bottled water, yogurt, donut pop-ups and blueberry and strawberry parfaits. Best chow-down from this small choice: The pop-ups. With thousands of people attending these events, can they splurge a bit to vary and expand the menu? Is tea too much to ask for? Grade: 1.5 Jacks (Note: Cuisine ratings do not figure in the overall Jacks score.)

Overall Grade: 4.5 Jacks  Great variety in the format, comedy which consistently hits the bullseye, and the willingness to advocate in public for an end to clutter growth. Sure nominee for Best Upfront Event of 2016.

Quick recap of our Jacks system:

The opinions and points of view expressed in this commentary are exclusively the views of the author and do not necessarily represent the views of MediaVillage.com/MyersBizNet management or associated bloggers. Images courtesy of Turner.