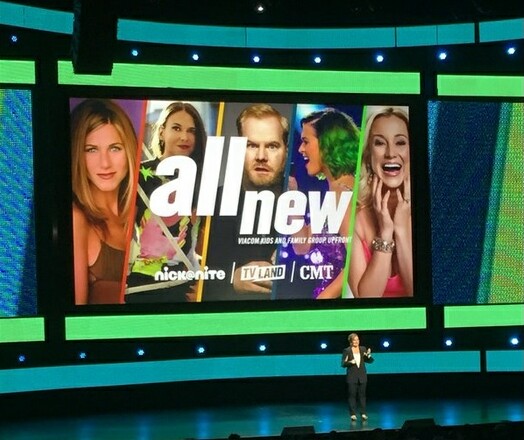 Viacom kicked off the 2016 Upfront showcase season with Nickelodeon last Wednesday, then followed up the next day with the rest of its key Kids & Family Group channels: Nick@Nite, TV Land and CMT.

Venue: Rose Hall, the Jazz at Lincoln Center/Time Warner Center auditorium which has become a mecca for well-executed network showcases. The Columbus Circle-based theater can handle as complex or simple a production design as you like, and there isn’t a bad seat in the house. Simple was the course here, with an illustrated circular backdrop framed by small staircases at both ends. Pictures of individual series were displayed Cinerama-style, supplemented by critic reviews and social media reaction. Interestingly, there were empty seats scattered around the hall for this Upfront pitch.  Grade: 3.5 Jacks

Presentation: Less than an hour for the second straight time and divided into sections again, this time by network. However, the format came off less rapid-fire than Nickelodeon the day before, thanks to spacing performances throughout the hour instead of at the end. Each network came with a characterization:  Nick@Nite as TV "for the gaf generation," TV Land as "a destination for appointment viewing" and CMT being a bigger, broader fan-driven brand. Where Nick@Nite was concerned, there was no explanation for what the gaf generation is, and zip details on programming changes ahead. Given Nick@Nite takes up the majority of Nickelodeon's primetime lineup, largely with off-net replays of “Full House,” “The Fresh Prince of Bel-Air,” etc., this was surprising. Overall, content ruled. Grade: 3 Jacks

News: Six new series will play on CMT before the end of 2016, headlined by what the channels hopes will be a dynamic scripted duo – “Still the King” (Billy Ray Cyrus as a washed-up singer on a personal comeback trail with his family, starting June 12) and “Million Dollar Quartet,” adapting the Broadway music about rock 'n roll's beginnings in 1950s Memphis, coming this fall. “Dude Perfect,” featuring the popular group of trick-shot Web video-makers, kicks off April 14, while three-week miniseries “NASCAR: The Rise of American Speed” premieres May 18. The specials agenda includes a new “Concert of the Summer” attraction and documentaries “The Bandit” and “Chicken People.” For TV Land, the only new series set is “Lopez” (coming March 30), a mockumentary-style comedy overseen by “Silicon Valley” executive producers. Three pilots, all described as "comedies with drama," are under consideration – “The First Wives Club” (adapted from the hit movie), “Nobodies” (show biz tale from “Mike & Molly” co-star Melissa McCarthy) and an untitled dramedy inspired by “Real Housewives” cast member Kyle Richards. Also, “Younger” creator Darren Star will develop at least one more TV Land production. Grades: 3 Jacks for CMT/2.5 Jacks for TV Land/0 Jacks for Nick@Nite

Star Time: Plenty -- and plenty good -- entertainment inside the hour. George Lopez got in a few choice Donald Trump jokes during his stand-up. "That wall will get 10 feet higher," he said, referring to how Trump's plan for securing the border will impact Latinos trying to enter illegally. "F---, we got tunnels!" As for his TV Land series, he noted, "We fought about the title. I wanted ‘Older.’” A more laid-back Jim Gaffigan admitted that "ad sales is why I became an artist."  “Million Dollar Quartet” brought out its co-stars, only together for a few days after winning their roles via auditions in Memphis, to do a pop medley. Kevin Fonteyne as Johnny Cash showed he has the voice and timber of Cash down pat doing "Folsom Prison Blues,” while Christian Lees stunned the crowd with a high-wire "Great Balls Of Fire" as Jerry Lee Lewis. Cyndi Lauper closed the hour with a country-tinged "Misty Blue" and the song that brought her everlasting fame over three decades ago, "Girls Just Want to Have Fun." "Maybe when I turn 80 or 90, I'll do wheelies and still do that song," Lauper quipped to the audience. Her voice remains loud and proud. Grade: 4.5 Jacks

Cuisine: Plentiful supply of Italian and country-centric favorites, such as chicken and waffles. Best dishes: cavatappi with pesto sauce and mushrooms, and rigatoni in tomato sauce. Worst dish: couldn't find one.  Grade: 3.5 Jacks

Overall Grade: 3 Jacks The pace and a fine group of performances (with the cast of “Million Dollar Quartet” our first nominee for surprise Upfront attraction this year) were offset by a mixed news roundup.  Hard to believe there was nothing much to say about Nick@Nite.