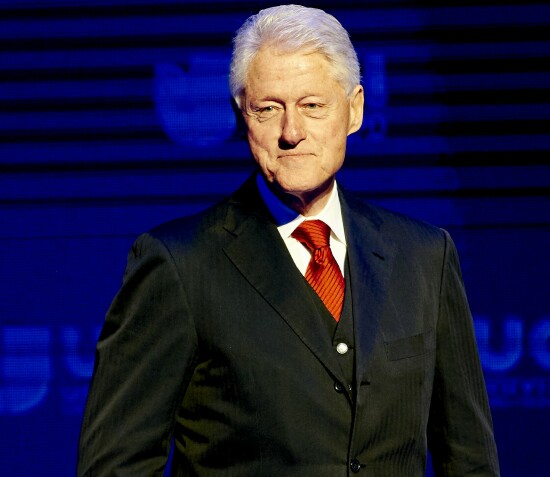 Venue: Back to the Broadway theater district, this time the Lyric Theater with entrances on both W. 42nd and 43rd Streets. Talk about the Great White Way: The stage was clean, white and stylish. Just as in previous years, Univision projected factoids on the state of Spanish-language viewership as attendees found their seats. Among the most notable: Ninety-one percent of Univision primetime viewers watch live, while 85 percent of people catching sports coverage on Univision and sister channels Unimas and Univision Deportes do not watch ESPN. Grade: 3.5 Jacks

Presentation: Out to educate and stimulate the crowd, especially representatives of advertisers still on the sidelines over making Spanish-language ad deals, former President Bill Clinton did his best to do both through a one-on-one interview with Fusion correspondent Alicia Melendez. With the Latino population reaching 60 million, and 44 percent of them Millennials, "I'd look carefully at these changing demographic profiles," Clinton told Melendez. He also called for Republicans and Democrats to fashion bipartisan policy on economic and immigration matters. "You need a credible platform on immigration reform, including a path to citizenship. You need policies of radical inclusion and cooperative models. When countries focus on cooperation rather than conflict, good things are happening."

Later, Ad Sales Executive Vice President Steven Mandala noted that 13 out of the top 50 U.S. brands still don't advertise on his networks. "I'm still confounded by that," he acknowledged (without naming names). "If you're not involved, get out of the slow lane and take a walk with us." Two compelling reasons why: A huge live and unduplicated audience base and direct access to "Billennials," the growing audience of bilingual millennials. Grade: 4 Jacks

News: “La Banda,” the upcoming boy band talent competition from “American Idol” executive producer Simon Cowell and featuring superstar Ricky Martin as one of its judges, has received a second season renewal (for 2016) even before the first season debuts. There's a twist -- the second season will search for an all-female pop group. For the first time an upcoming telenovela will focus on workplace issues and single motherhood in “Antes Muerta Que Lichita”/”I'd Rather Be Dead than Ordinary.” (NOTE: Televisa, the Mexican-based network overseeing this series, can add more relevancy to Antes by producing it in the U.S. with local actors and crews. New York, Los Angeles or San Francisco would be natural sites. How about it?) Separately, Univision will launch a new Social Media Awards special, honoring celebrities most creative in Spanish with Facebook, Twitter, etc. And for now, the iconic three-hour primetime variety series “Sabado Gigante”/”Giant Saturday” will be succeeded this fall by two hours of “Sabadazzo” (moved from Saturday afternoon) and another edition of “Sal Y Pimenta.” New weekly Unimas dramas include “Nino Santa”/”Holy Child,” co-produced by Gael Garcia Bernal and actor Diego Luna, and drug trafficking series “Logout” and “Ruta 35”/”Route 35.” Grade 3.5 Jacks

Overall Grade: 3.5 Jacks  Polished effort which raised the bar with President Clinton's presence. On the flip side, nothing on the future direction of El Rey Network and Fusion beyond brief sizzle reels.

Venue: One more time for Jazz at Lincoln Center, this time filling stage center with logos and colorful graphics stressing an "All Together Latino" theme. Words like scale, culture, portfolio and reach popped in and out of the graphic wall. Grade: 4 Jacks

Presentation: If pairing people up to introduce segments didn't drive the "All Together" message home (Hispanic Enterprises Chairman Joe Uva walking out off the bat with omnipresent NBC Universal Ad Sales Chairman Linda Yaccarino, for instance), executives on stage turned to connections -- one being NBCU in perfect position via Telemundo, NBC Universo and content on NBC and other NBCU channels to reach Latinos. Another is the growing influence of Latinos on mainstream culture, whether fashion, food or hit music. "It's a culture for whom the American dream is very much alive and well," said Hispanic Group Executive Vice President Mike Rosen.

Uva even made a connection with President Clinton's remarks at the Univision Upfront a few hours earlier. "We agree," he said to applause. In one more connective appeal, NBCU introduced Culture First, a project using cultural traits to help advertisers plot Latino ad campaigns in both Spanish and English. "With this upfront, and only with us, language will never again be a barrier to great marketing," Uva noted. Grade: 3.5 Jacks

News: Telemundo will premiere “Bajo El Mismo Cielo”/”Under the Same Sky,” a telenovela adapted from the Oscar-nominated film “A Better Life” about one illegal immigrant's quest to provide for his family in Los Angeles (where the series will be taped). A new move into scripted series with a musical bent will begin this fall with “Celia,” based on the life of salsa singer Celiz Cruz, and “Hasta Que Te Conoci”/”Until I Met You,” dramatizing the life of Latin America superstar Juan Gabriel (in development for several years). Pope Francis, the first Latin American pope, will be the subject of a separate miniseries later in the 2015-16 season. In the variety arena, Telemundo will launch “La Sorpresa De La Vida”/”The Surprise of Your Life,” a two-hour weekly mix of games, celebrity visits, performances and stunts out to fulfill the aspirations of audience members, and live coverage of the Latin American Music Awards and iHeartRadio Festival Latino.

Host(s): Today co-anchor Natalie Morales and “La Voz Kids” host Jorge Bernal made a good team, although their times together were few and brief. Reggaeton sensation Daddy Yankee with his dancers and light show brought the house down. Yes, he did "Gasolina." Grade: 3 Jacks

Venue: Best Buy Theater on W. 44th St. just off Broadway. Still one of the most flexible places to stage an Upfront, which leaves one puzzled over why more programmers didn’t use it compared to previous years. With "Time for Azteca" as the tag line, the space was divided in half. A video wall with the channel's logo to the right faced guests, with after-event food and refreshments directly behind it. Grade: 4 Jacks

Presentation: Remember the days when Spanish-language network executives participated in musical numbers on a regular basis? (Think former Univision sales maven David Lawenda exhibiting his boogie grooves during one such tune.) They came roaring back in a “Chorus Line”-type opener in which four Azteca executives demonstrated their singing prowess to "Sales, Platforms, Ratings, Stations." From there, President/Chief Executive Officer Manuel Abud and his colleagues reviewed Azteca’s progress over the last year in cultivating broadcast distribution, ratings (up 33 percent in primetime among people 18-49), outreach via social media and community marketing. "We're now in position to offer the most ambitious programming lineup ever," Abul added. Grade: 4 Jacks for the original song and a pre-dance sequence of activating line art on the video wall; 3 Jacks for the overall presentation.

News: Interactive game programs will go on weeknights at 7p.m. this fall under the umbrella title of “La Hora Ganadora”/”The Winning Hour.” There will be a different game each weeknight, including a "Dance If You Can" competition and a contest centered on impersonating notable music stars. New weekly series include “Kacak”/”The Fugitive,” acquired from Turkish television with Spanish translation, and “Escandalos,” ripped-from-the-headlines drama produced in Miami and throughout Latin America. Sunday afternoons will become family-oriented with “Hasta Manana Al Lunes”/”Until Monday Morning” and “Viva El Show”/”Long Live the Show.”  Grade: 3 Jacks

Hosts: Abud and his executive colleagues did fine. Grade: 3 Jacks

Overall Grade: 3 Jacks  Solid offering, and it was nice to see executives let down their guard in song or dance.

A reminder of our Jacks ratings:

Estrella TV held its Upfront event at Bryant Park Grill last Monday while Azteca was doing its thing. Big news there: The formation of Fenomeno Studios, a digital production facility that will create Web/smart TV content, some of which may be piloted for a run on Estrella's broadcast/cable network. Coming in the near future to Estrella: Political news-minded “En La Lucha,” citizen news journal “iTestigo” and a comedy interview series hosted by actress/comedian Consuelo Duval.

Up next: Screenvision and NCM Media Networks