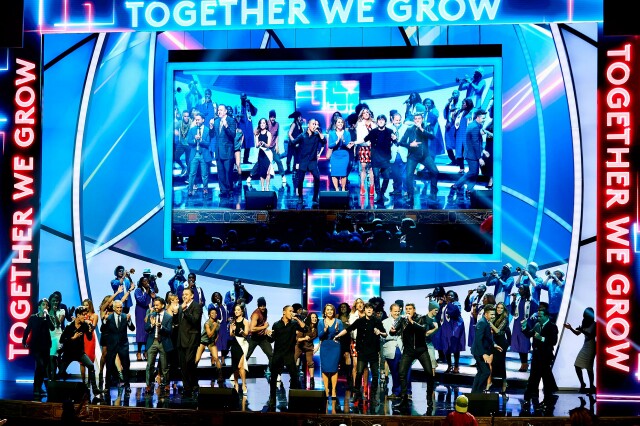 With its new Story House program development unit, whole ownership of Fusion and investment in El Rey Network, Univision Communications has evolved over the last year into a formidable dual-language media power. However, Spanish-language remains the company's content foundation and that was the emphasis at their late morning Upfront event Tuesday.

Venue: Lyric Theater at 211 W. 42nd St.  Attendees found a bright blue stage in front of them, with staircases at either side. (Note: Credit theater management for giving journalists a lighted table at the back of the mezzanine level, the better to view and work from.)  Grade: 4 Jacks 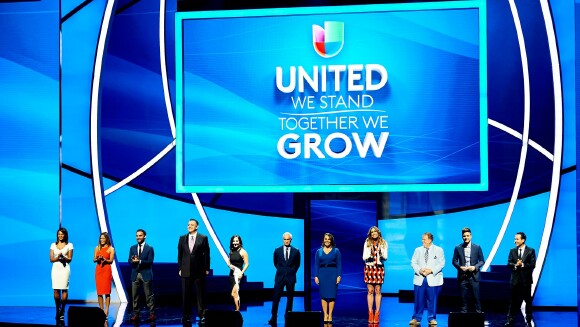 Presentation: From the start, executives pushed the concept of "United We Stand, Together We Grow." All of the company's networks are united behind super-serving Latinos (especially Latino Millennials) to a great degree, and the focus is paying off with double-digit growth either by audience demographic or daypart this past season. Examples: Univision sister net UniMas increasing its primetime crowd 31 percent over the last 12 months, or 71 percent of Univision's current viewers being network-exclusive. "Our viewers are your growth customers," said Keith Turner, Univision's President of Ad Sales and Marketing. "They are more likely to spend more of their dollars at all kinds of retailers." Turn over bigger ad budgets to the company's array of networks, and together everyone grows more business, Turner and his executive colleagues pointed out when not pointing to new programming initiatives. "These viewers are cord-keepers, not cord-cutters," noted Executive Vice President of Ad Sales Steve Mandala.  Grade: 3.5 Jacks

News: In a ground-breaking development, Netflix and UniMas will collaborate on a first-run weekly drama based on the notorious (and just-recaptured) drug lord El Chapo. Univision's investigative news unit will contribute material to the production, and Netflix will debut "El Chapo" on UniMas next year before distribution among its smart TV set and TV-device affiliates. This is the first time Netflix has made a combo original content development/distribution deal with a broadcast network. (Attendees saw the opening animated title sequence post-announcement.) Story House, already going ahead with a documentary series for HBO and a Jorge Ramos Fusion special, will oversee "El Chapo." Another side of this Netflix relationship will be second-runs of "Narcos" on Univision and "Club de Cuervos" on UniMas later this summer, prior to launching second seasons for both originals on Netflix. Staying with dramas, main telenovela supplier Televisa has agreed to create two made-in-the-U.S. series: "La Doble Vida de Estela Carillo"/"The Double Life of Estela Carillo," about a U.S.-based singer of regional Mexican tunes trying to hit big (with a singer in the lead role) and "Vino el Amor"/"Then Love Arrived," set and produced in Napa Valley. Univision also will try political drama in a novella format with "La Candidita"/"The Candidate." After tinkering with Saturday nights post-"Sabado Gigante"/"Giant Saturday," Univision will turn the time period over to live soccer doubleheaders featuring Liga MX teams (with other Liga matches on sister service Univision Deportes). Comedy series will have an increased presence on both Fusion in English and Galavision in Spanish.  Also look for a Jenni Rivera-derived miniseries, "Su Verdadero Numbre Era Dolores"/"Her Real Name is Dolores."  Grade: 4.5 Jacks

Hosts: Keith Turner, Steve Mandala and Executive Vice President/Chief Marketing Officer Jessica Rodriguez know how to work both a message and their audience. One of Mandala's asides is a nominee for Best Quote from Upfront Week: "I only have to say the words 'big data' to get everyone's head exploding."  Grade: 3.5 Jacks

Star Time: Fun opening number involving a parade of Univision stars, the winning group of hit competition series "La Banda"/"The Banda" (singing an original version of "United We Stand") and mambo dancers. And after years of wrapping the show with memorable mini-sets from the likes of Marc Anthony, Enrique Iglesias or Shakira, organizers went with a change of pace -- the hit Broadway show "On Your Feet," featuring Ana Villafane's breakout star turn as Gloria Estefan. Villafane and cast members brought their A-plus game on stage with a knockout medley of Estefan hits from "Conga" to "Oye." (Villafane, in this writer's opinion, should have nabbed a Tony nomination. We can praise the judges for giving Sergio Trujillo's excellent choreography a nomination.)  Grade: 4.5 Jacks

Cuisine: For the second straight year, press was forbidden to partake in the post-ceremony eats at Gotham Hall.  No Jack grade. (Note: Cuisine ratings do not figure in the overall Jacks score.)

(Special Note: It has been more than two years since El Rey Network offered an Upfront showcase of its own in public. Many people want to know what kind of future this channel wants to have, especially with original programming. Can we get one soon?)

The opinions and points of view expressed in this commentary are exclusively the views of the author and do not necessarily represent the views of MediaVillage.com/MyersBizNet, Inc. management or associated bloggers. Photos by Phillip Angert courtesy of Univision.