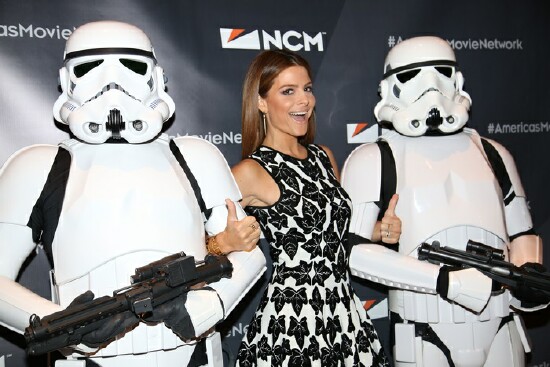 Screenvision and National CineMedia, the titans of the cinema pre-show advertising and featurette arena, were poised to become one titan last May, under a $375 million merger. Like Comcast and Time Warner Cable at that time, the outlook was sunny for a done deal. After the Justice Department signaled their intention to block the merger on antitrust grounds, Screenvision and NCM separated out of their effort three months ago. If you didn't know all that, and attended their individual Upfront showcases over the last two weeks, you would never know that they were on track to combine and service 36,000 screens inside 4,000-plus theaters nationwide.

Venue: Surprise -- not a movie theater, but Skylight's Moynihan Station space halfway down W. 33rd St. between 8th and 9th Ave. (FYI: Nickelodeon kicked off the 2015 Upfront event calendar here in late February, and YouTube organized its pre-Brandcast fan fair here the week before.) Big presentation points: Pre-show ad sales up 20 percent from spring 2014; big data techniques now allow sponsors to match their ads to the audience of specific films on tap that week or weekend, instead of MPAA ratings. Big news points: "Front & Center On," a new pre-film showcase for branded content, starting June 1; some "Front & Center On" vignettes will be crafted by Screenvision's 40 Foot Solutions subsidiary. Big after-presentation treat: "Get into the Movies" exhibits where attendees could "play" extras in a trio of scenes -- one Western, two space epics. What worked: Charming delivery by CEO Travis Reid and willingness by him and his executive colleagues to do a pre-event debrief for press. What didn't work: A bland-tasting appetizer here and there. Overall Grade: 4 Jacks

Venue: A theater in AMC's Lincoln Square multiplex on Broadway, between W. 67th and 68th Sts. Big presentation points: New branding as "America's Movie Network," complete with light-beam logo and intent to position the company -- and the movie industry in general -- as drivers of social entertainment and conversation. Big news points: E! host/correspondent Maria Menounos (pictured at top with Storm Troopers from "Star Wars") becomes host of “First Look,” the pre-movie program reaching more than 21,000 screens/1,600 theaters nationally. AfterbuzzTV.com, the Web site put together by Menounos and producer Keven Undergaro, will create a set of recurring “First Look” features, starting with "Movie Minute" celebrity interviews. And perhaps the biggest news of all: The launch of Cinema Accelerator, extending ad buys to mobile and digital platforms through a mix of movie ticket purchase and other data sources. Big after-presentation treat: A demonstration of Barco Escape, a three-sided screen allowing for more immersive movie and commercial presentations, using a multi-camera travelogue and an M&M test ad that melts apart, you could say (and not in your hands). What worked: The overall graphic look, Sales and Marketing President Cliff Marks' contained enthusiasm and a few choice trailers, including the latest from “Star Wars: The Force Awakens.” What didn't work: Not seeing “First Look” in action somehow. Overall Grade: 4.5 Jacks, earned in part from Barco Escape. Think of this as Cinerama, IMAX and ultra HD's best attributes assembled in one compelling format. Let's watch how this develops.

A reminder of our Jacks rating system: