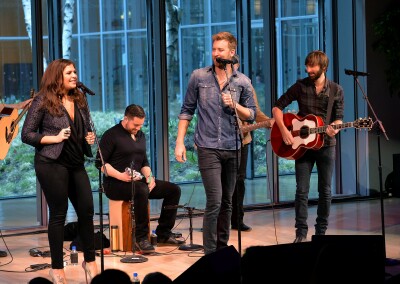 The annual April shower of NYC upfronts started last week with a pair of TV players in action. CMT, mixing country music programming with reality series about eclectic down-homers of late, was first at bat.

Presentation: "Fun, fresh originals," in CMT president Brian Philips' words, keeps the channel in rock-solid shape, as in up 31 percent in primetime and 22 percent in total day ratings so far this year. After going thick on the ratings news for all of 2013 and so far this year, Philips let development executive Jason Dinsmore intro what's new and ahead with a plentiful serving of video clips, then turned matters over to superstar group Lady Antebellum for a three-song set highlighted by their mega-hit "Need You Now." The performance drew a standing ovation. Grade: 4 Jacks

News: From here on, more emphasis goes to documentary specials and series/miniseries about either legendary musical landmarks and personalities, or families at turning points. Upcoming examples of the landmarks: They Called Us Outlaws (think Willie Nelson and Waylon Jennings) involving Breaking Bad producer Mark Johnson; Urban Legend: When A Nation Went Country (influence Urban Cowboy had on music and pop culture), and Johnny Cash: American Rebel. Highlights of the latter: Promiseland, a four-hour look at American farmers from Ridley Scott, Freedom by Morgan Spurlock and My Dysfunctional Family, chronicling parents at odds with teenagers at risk. The wave of off-beaten path programming will continue this fall and winter with Death Valley and competition series Broken Skull Ranch. One more landmark: Crossroads, the acclaimed set of specials bringing country and pop/rock artists together marks its 50th episode June 13, pairing Katy Perry with Kacey Musgraves. Unlike the previous 49, this hour will run on MTV, VH1 and other Viacom-owned channels following CMT's premiere. Grade: 5 Jacks

Overall Grade: 4 Jacks. A balanced effort highlighted by the new documentary direction the channel's taking, under the supervision of top producer-directors as Scott, Johnson and Spurlock.

A few observations from the passing parade:

***Screenvision, one of two cinema advertising organizations entering the upfront scene with events last spring, treated an audience at the Ziegfield Theater last Wednesday to a preview of Captain America: The Winter Soldier. The formal upfront pitch came from a well-animated pre-feature video introduced by chief executive officer Travis Reid and chief revenue officer Jim Tricarico. Since adopting a "Weekend Daypart" strategy with in-theater messages sold by dayparts, days and seasons, 50 advertisers have joined Screenvision's roster over the last 12 months. Reid and Tricarcio expect to draw more clients with placement in or alongside new short subjects from Entertainment News Television and Defy Media. Grade: 4.5 Jacks (for the video)

***It will take a while to see if Amazon Fire TV, introduced at a NY press event last week, becomes a universe-changer for smart TV adoption and usage. What's clear is that Amazon, with a deep rep for customer service, botched the event for many members of its intended audience (yours truly included). With so many places available and suited to handle what clearly was the major TV presentation of the week, the PR agency working on Amazon's behalf chose a venue way too small to house the anticipated crowd (Milk Studios near the High Line overhead walkway on W. 15th St.). Camera crews were not allowed to tape the event. Also, with the event filled to capacity just a few hours after invites were e-mailed to journalists Thursday morning, there was no effort in the interim to secure a place reporters could watch via teleconference, or organize a post-event conference call. End result: A classic case of event mismanagement.

***Congratulations to all the Peabody Award winners from Orphan Black and Orange is the New Black to Frontline and Outside the Lines' respective NFL concussion episodes. Forty-six picks in all, most ever from mass media's Pulitizer Prize-type annual honors. Pivot will showcase the winners -- and the Peabody ceremony next month here in NYC -- on an original special this summer.

Next up with upfronts: Discovery Communications