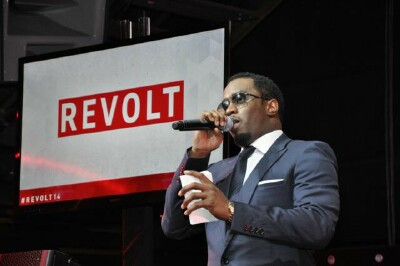 One veteran programmer and one new programmer had the New York upfront spotlight to themselves Tuesday night. In one corner: Scripps Networks' family of lifestyle channels. In the other: Revolt, Sean Combs' six-month-old music-driven service.

Venue : Alice Tully Hall on the corner of Broadway and W. 65th St. Logos and titles of Scripps' channels flanked the glass walls of this Lincoln Center structure (upgraded several years ago), while food stations offering a wide range of tasty treats from pepper-jack turkey sliders to Indian chicken were spaced throughout the lobby. In one of several pre-ceremony moves, attendees had more than an hour to taste some delicacies and snap selfies with various channel personalities, including Guy Fieri from Food Network, HGTV's Property Brothers, Samantha Brown and her Travel Channel colleagues and Vanilla Ice (featured on DIY Network). More food kudos to the caterer handling the Scripps press gathering Tuesday morning for a menu featuring kiwi/honeydew and pomegranate/strawberry juice, Nutella-banana turnovers and matza brey (for press marking the final day of Passover). Grade : 5 Jacks, plus a special 9 Jacksforthe food.

Presentation : A throwback to the days when senior advertising sales executives routinely were lead-off speakers, making the key points on the channel's behalf. The current pecking order is chief executive, followed by key programming executives, with the ad sales advocate speaking midway or at the end. But Scripps had ad sales and marketing president Steve Gillotti bat first. Assisted by a clear and classy set of graphics at the back of the stage, Gillotti offered the view that real-time lifestyle programming is a slam-dunk audience attraction. In the process, he whipped up some of the best punch lines at any upfront so far in 2014. On more channels experimenting with similar content: "We're not testing the waters. We own the whole damn lake, and the lake's getting bigger." Other choice cuts: "Our audiences do what they view” ... “People look to us to inspire transformation in their lives” ... and the best of them all, “Our viewers see the advertising as a resource, not an interruption." From there, various channel presidents (Brooke Johnson for Food/Cooking Channel), Kathleen Finch (HGTV/DIY) and Travel Channel newcomer Shannon O'Neill mixed current/future highlights with an on-stage personality interview. Grade: 4.5 Jacks

Overall Grade: 4.5 Jacks Outstanding mix of script, videos (the opener for Travel Channel was a textbook example of creative editing) and graphic displays. Special note: Half-jack subtraction for how Great American Country came off. Nice video and a pair of personalities getting acknowledged, but no commentary on new programming, compounded by the absence of that information in press kits distributed Tuesday morning.

Venue : Marquee, the nightclub/concert venue on 10th Ave. between W. 26-27 Sts. Packed crowd on hand to see the channel up close for themselves, six months after its launch. Simple display, with small monitors on either side of the stage. Bars throughout the space served drinks before and after the presentation, and the post-game show featured performers Childish Gambino (singer/rapper who often reminds you of John Legend) and Dillon Francis, plus DJs spinning tunes. Grade: 4 Jacks

Presentation : The bottom line from every executive or talent up on stage was uniform. This is a channel about music and giving everyone from superstars to musicians in any genre a chance to break in. "We're the influence that influences the influencers," chief executive officer Keith Clinkscales noted without breaking into a tongue-twisting sweat. (That’s another nominee for top 2014 upfront quote.) When the team of executives that Revolt chairman Sean Combs organized to run his channel wasn't making points, Combs himself was, weaving in and out of the proceedings at will. At every turn, Combs assured us that Revolt will set innovative ad collaborations and that nothing is off the table. Pointing to a monitor presenting the Fiat new car model spot with -- you guessed it -- "Happy" playing in the background, Combs said, “That Fiat commercial gave them their No. 1 month in sales history. Yes, we can do anything. The buck stops here. Anything can be done if it's done the right way." The pace often dragged, and with so many people taking a turn, at times people sensed the kitchen sink would chime in if in the house. Nice surprise: An inspiring video about the recent Revolt Nationtour landing in South By Southwest and other music destinations. Grade: 3.5 Jacks

News: Advertising was the dominant headline for a change -- AT&T, Hewlett-Packard, Procter & Gamble, Pepsi and Anheuser-Busch have come aboard as recurring advertisers, plus another global advertiser, name withheld for the moment, has signed a eight-figure contract. This wasn't the place to make new programming announcements. Grade: 3 Jacks

Overall Grade: 4 Jacks Solid, if way too extensive a first shot with this kind of showcase. Tips for round two: more emphasis on the format and current and future programming -- and keep the presentation to an hour or less!

Next up: BET and Cinemoi North America