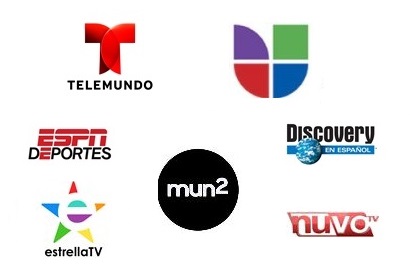 Continuing with our coverage of Upfront Week 2014, here is a rundown of events hosted by Spanish-language networks.

Venue : Al Hirschfeld Theater on W. 45th St., home of Kinky Boots, last year's Tony-winning best musical. Broadway theaters have been Univision's go-to venues for a half-decade. This upfront was its most attended yet -- standing room only on all sides of the balcony, with other people between the aisles. Grade: 4.5 Jacks

Presentation: While time was devoted to the company's moves over the last year into English-language Latino/millennial content (including the launch of Fusion in partnership with ABC News, the El Rey Network via investment and the 10-part documentary collaboration with Pivot), the bread-and-butter goal is attracting Spanish-language advertisers. One fun way Univision highlights that intention is by letting their ad sales chief loose on stage. Accordingly, Steve Mandala -- decked out in rapper's gear, surrounded by dancers -- performed "Talk Spanish to Me" (a takeoff on the rap hit "Talk Dirty to Me") – with Pitbull, Ricky Martin and Univision talent joining in the chorus via video. "That makes two years in a row with complete self-humiliation," he joked after his rap turn. Mandala and other Univision executives stressed their ability to reach an unduplicated Latino audience through the network’s services. Big negative surprise: Only a quick moment devoted to Galavision, the company's top-performing cable channel, with nothing about its future direction. Big positive surprise: Carlos Santana and Juanes teaming up for a closing number, then Santana and his guitar bringing the house down with "Oye Como Va." Grade: 4.5 Jacks

Overall Grade: 4.5 Jacks Year-to-year, Univision's event scores with its production values and choice of closing performances, usually among the best of the upfront bunch. The lack of news about Galavision and Pivot's documentary projects brought this Jack score down a peg.

Presentation : Assisted by a video depicting every buzzword or acronym used among this year's upfronts, ad sales executive vice president Mike Rosen urged the audience to be more creative in reaching Latinos. "You should outsmart and outshine, not simply outshout," Rosen told attendees. With that, Rosen unveiled "Total Market Innovation," a project inviting advertisers to come up with unique Telemundo and mun2 campaigns -- with a guarantee attached. If the result doesn't live up to pre-set goals, Telemundo/mun2 will rebate the money gap to the participating advertiser. The event also served to introduce the new people presiding over both channels -- Luis Silberwasser at Telemundo (starts in August) and Ruben Mendiola at mun2 (on hand). Pop/bachata sensation Prince Royce closed the show with a three-song set, including his hit version of "Stand by Me," joined by the firstLa Voz Kids/The Voice Kids winner. Grade:4.5 Jacks

News : Under new president Mendiola, mun2 will become parent NBC Universal's go-to place for Spanish-language sports coverage, starting February 2015 with the Super Bowl (following Fox Deportes' first-ever live simulcast of that event) and continuing with the Women's World Cup soccer tournament next summer from Canada, NASCAR racing and the 2016 Summer Olympics in Rio. His channel will also get back in the scripted marketplace with Maria Entre Todos Los Mueros, a female-oriented take on zombie dramas, and dive into reality with the controversial singer Gloria Trevi. At Telemundo, 800 hours-plus of new content includes Senora Acero/Mrs. Acero, the telenovela under development in English for USA Network, El Jardinero/The Gardener, a telenovela about an illegal immigrant living in Los Angeles and You Soy El Artista/I Am the Artist, a talent search series. Also, Telemundo's Fluency unit (English or Spanish multiplatform/multicultural productions) launches Isa, its first 90-minute movie, on Syfy next month. Based on the clips presented, Syfy might want to green-light a series out of this if viewers embrace the film. Grade: 5 Jacks

Overall Grade: 4.5 Jacks Had one of last week's big announcements with mun2's huge sports bet, plus offered advertisers still on the fence about advertising in Spanish a no-lose way to participate with "Total Market Innovation."

Venue : Hearst Tower on the corner of 8th Ave. and W. 57th St. Second year in a row for ESPN at this location. An auditorium near the lobby elevators was used the first time around. For round two, a room on the 44th Floor was used, with everyone seated at tables and plush chairs arranged in a semicircle in front. Grade: 4.5 Jacks

Presentation : Latinos are more into live sports beyond a diet of soccer and boxing, and ESPN Deportes is the place to find and enjoy those sports in plentiful fashion, especially events across the USA. That was the underlying message this channel drove home through statements, stats and a trio of short panels featuring athletes and Deportes commentators. One stat example: baseball ratings are up 63 percent so far this season. "The immigrant that plays sports has a place at the water cooler," insisted Alvaro Martin, Deportes' lead pro football/basketball play-by-play announcer. "We have to address them all." Grade: 4.5 Jacks

Venue : Stage 37 on W. 37th St. near 11th Ave. -- another venue that mixed up the seating arrangement to nice effect -- chairs up front, benches in the back – enhanced by a huge screen in the center, with tall vertical screens on the sides. Grade: 4.5 Jacks

Presentation : Past efforts on behalf of Spanish-language Discovery En Espanol and Discovery Familia emphasized spectacular videos, while skimping on perspective from executives or talent. Not this one. Executive or talent commentary came before or after each video, starting with card trickery from Antonio Diaz, an outstanding magician and host of new en Espanol series El Mago Pop. Discovery chief executive David Zaslav chimed in early on, promising attendees that this season ahead will ignite big things for both networks. "The Hispanic market is key to the (future) success of our company," he said. "We're driving these channels harder, so look for much more original content," put together from parent Discovery's $1.6 billion programming budget this year. Grade: 4 Jacks

News : Discovery en Espanol's lineup for the months ahead includes two original series--Mago Pop with Diaz traveling with his magic worldwide andTexas Trocas/Texas Trucks, following a Texas-based Latino family in the big-rig business. At Discovery Familia, one highlight will be Soy Muy Joven Para Esto/I Don't Have Time for This, a special about five Latinas facing breast cancer.Grade: 3.5 Jacks

Overall Grade: 4 Jacks Another candidate for comeback presentation of 2014!

Venue : Edison Ballroom on W. 47th St. near Broadway, home to National Geographic's NewFront event the week before. In an effort to get a more relaxed, cozy atmosphere, the main floor was filled with sofas and small tables instead of chairs arranged in rows. At one point pre-show smoke billowed from the stage, which for a few moments threatened to get out of control and leave some attendees coughing. Grade : 4 Jacks

Presentation : More variety show-like in nature than most upfronts, arranged by program category. Speech-making by Nuvo executives -- including Jennifer Lopez, now a year into her role as chief creative officer -- was kept to a minimum, with the majority of time taken by videos. Short Latin dance routines on the floor (nicely choreographed by Brice Mousset) served as bridge segments. With Nuvo's primetime ratings up 22 percent since a format re-launch last summer, Latinos "are the game-changers for America's cultural and economic future," Lopez said. "We want to become the definitive place for the modern Latino." Anyone wondering how Nuvo's recent $200 million purchase of Fuse from Madison Square Garden will impact both networks will have to keep wondering for a while. With that deal expected to wrap early July, Nuvo CEO Michael Schwimmer didn't offer any clues beyond maintaining that the channels will not merge. Grade: 4 Jacks

News : Nu America, a set of nonfiction series and specials with topical issues in the background, premieres July 16 with Los Jets, about a North Carolina high school soccer team with a number of undocumented members. Talent competition series Sensation, looking for the next well-rounded Latino entertainer (singing/dancing/acting), is set to launch next spring. In between, expect an increased number of music, comedy performance and live boxing specials. Reformatting of the channel's Web site and a TV Everywhere app will happen before the end of 2014. A move into scripted content will happen in mid/late-2015 at the earliest. Grade: 3.5 Jacks

Host : Lopez (who came on at the end), chief executive officer Michael Schwimmer and colleagues were solid. Grade : 4 Jacks

Venue : Hudson Hotel on W. 58th St. (north of Columbus Circle and Time Warner Center), which made its upfront debut earlier this spring via ReelzChannel. This time out, two sections of its rooftop terrace were used -- an outdoor patio for cocktails and an enclosed space for dinner. Salmon, short ribs and cheese ravioli were on the buffet menu. Throw in a clear, slightly cool night, and the patio became a hot space for sunset-watching. Grade: 4.5 Jacks

Presentation : Quick set of speeches about the channel's ratings growth over the last year and additional commitments to original, made-in-the-U.S. Spanish-language programming. Chief operating officer Winter Horton invited the agency crowd to come up with new sponsorship and product integration approaches. "I challenge you to challenge us," Horton declared. "We'll over-deliver every time." One huge problem: no videos highlighting current programs or upcoming ventures. The video screens around the room were used to flash Estrella's logo, or (briefly) title cards of new projects. Grade : 2.5 Jacks

Overall Grade: 3 Jacks Attractive location, nice cuisine and remarks that light interest with a crowd only go so far. If people don't see your network in action, or what's in store, you have little chance to make headway with them. Next time around, bring videos!