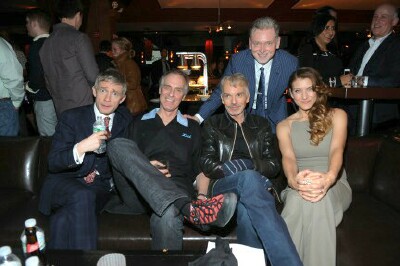 A busy week of New York upfront events launched in unusual fashion, thanks to the respective activities of UP (Uplifting Entertainment) and FX Networks (FX/FXX).

Venue: For the third straight year, UP parked a bus next to Bryant Park on W. 40th St. (stocked with appetizers, munchies and soda) to demonstrate its programming/ratings accomplishments. The demo, for the second year, incorporates happenings at Aspire, the Magic Johnson-owned channel UP collaborates with on advertising sales. One side of the bus touts UP, the other Aspire. Grade: 4.5 Jacks

Presentation: Straight mix of info, new programming announcements and videos, this time offered by Lisa Fischer, UP's executive vice president of advertising sales since January. UP's family focus in programming is making headway, with more than 1.2 million Facebook likes and one study showing the channel is now in the top 10 of engaged cable network audiences. "There's no downside to Up, because it's always going in the right direction," Fischer said. Viewership among specific demographics, including African-Americans, is also on the rise. As for Aspire, carriage has reached about 20 million households, with double that milestone projected by the end of 2015. One drawback: programming executives from Up and Aspire were absent from this event (geared to press), so several topics raised in a closing question-and-answer session couldn't be addressed in full. Grade: 4 Jacks

News: Four original series (two scripted/two nonfiction) will debut on UP by mid-2015, with details forthcoming. The channel's lineup of original movies will increase to 30 between this summer and next, including Mary Jo's Candy (August 16, winner of the channel's annual Faith/Family screenplay contest at the American Black Film Festival, taking place in New York for the first time June 19-22), Mistletoe Radio and Paper Angels (December, two of eight new Christmas season movies), Noah (separate from the Russell Crowe-starring film now playing nationwide in theaters) and Life Of A King, starring Cuba Gooding Jr. At Aspire, coming attractions include expanded coverage of black college football and basketball (including a women's conference championship) and Closure, a documentary special on trans-racial adoptions. Series in development include Change Makers and United Negro College Fund Next Generation. Grade: 4 Jacks

Overall Grade: 4 Jacks -- The bus is a cozy, intimate environment to show off what's taking place at a network (two networks in this case). For the future, programming executives should make a date to be present, at least for the press showcase. Separately, it's been a long time since Aspire has put on its own press debrief; with the curtain rising on year three late June, how about one?

Venue: Tripleheader approach this year, one year after FX surprised the world by morphing into a three-channel set (FX/FXX/FXM). Part One: Press came to the Avenue of the Americas headquarters of now parent 21st-Century-Fox for breakfast and a progress report from FX chief executive John Landgraf. Part Two: Off to the School of Visual Arts theater on W. 23rd St. for a red-carpet Fargo showcase, presenting the new limited series inspired by the Oscar-winning movie. (It debuts tonight.) Part Three: The channel's annual all-star bowling party at Lucky Strike Lanes (corner of W. 42nd St. and West Side Highway). Grade: 5 Jacks

Presentation: The ambitious strategy Landgraf and company announced last April no longer spans an extended time frame. "I look at the performance of our existing programming, the new shows that are joining our lineup this year, and the pilots we're shooting, and believe we'll live up to the promises we made last year," he told reporters. "In fact, we're ahead of schedule." Between FX and FXX, the number of original series will soar from 11 last year to 20 this year.” Earlier, Landgraf estimated it would take at least three years to have 25 original series in play.) At the Fargo screening, Landgraf noted that a year ago, 35 celebrities and show executive producers were at the bowling party. More than 100 came out this time, another example of FX/FXX's growing stature. (Check out some of the red-carpet commentary below.) Fargo's 90-minute opening episode drew extended applause, with Landgraf calling it a masterpiece. At the bowling party, there was plenty of celebrity-watching, plus pizza and Belgian fries for all. Grade: 5 Jacks for the events, 10 Jacks-plus for Fargo (anticipate sure-fire Emmy nominations for Billy Bob Thornton, Martin Freeman, newcomer Allison Tolman, writer/producer Noah Hawley and director Adam Bernstein).

News: Comedies Married and You're the Worst debut in June, likely as a back-to-back hour, followed in late summer by The Partnership, the sitcom teaming Kelsey Grammer with Martin Lawrence. At FXX, season 10 of It's Always Sunny in Philadelphia will debut next January, paired with the launch of Tracy Morgan's new comedy, now titled Do or Die. Series in development for both channels includeHoke, The Bastard Executioner from Sons of Anarchy creator Kurt Sutter, How & Why from Charlie Kaufman, Man Seeking Woman and Sex & Drugs & Rock & Roll. At least two more drama pilots will be filmed for 2015 consideration. There are no original series/miniseries heading to FXM in the near future.
Grade: 5 Jacks

Host: You don't get executives more relatable to any audience, or ready and comfortable addressing any subject, Landgraf. Grade: 5 Jacks

Here's some of what red-carpet travelers at the Fargo screening had to say:

Executive producer Warren Littlefield: "We're totally trying to play in the universe of (creators Joel and Ethan Coen). I tried and couldn't do it on network TV. Cable gives you tremendous freedom in the narration ... This series is about survival, the survival these characters are going through. It's their roller-coaster ride and you're invited to go on their journey."

Carlton Cuse, Bates Motel/The Strain executive producer, on making The Strain (coming to FX this summer): "It's an opportunity to reinvent the genre, by introducing a very cinematic look and having it be character-oriented horror. It's also a Tom Wolfe-like examination of the social order of New York City."

Fargo co-star Keith Carradine on doing this series: "The writing. It's brilliant. The tone is all on the page."

Fargo developer/writer/producer Noah Hawley: "It's a humbling experience. The Coens read my first episode and just invited me to go and make your show. Not one of the characters in this series can
complete a sentence. The aim for me is write inarticulate passages that convey meaning."

Joe Weisberg, The Americans creator/executive producer, on season two: "A dream come true this year. Everything just came together. Not a lot of blood spilled on my desk or in the writers' room. It's all up on the screen."

Billy Bob Thornton, Fargo co-star: "I had fun with the cast and the crew. Not the cold. (The series was filmed in Calgary, Alberta, Canada during some polar vortex periods.) Everyone across the board was terrific. There wasn't a bad apple in this barrel."

Next up: CNN, BBC America and ReelzChannel