As the weather gets colder, the ad market for soup brands starts heating up. Canned and packaged soup brand advertisers tend to schedule the bulk of their ads during this time of year, because they want to ensure that their ads are going to get a response. Another way to ensure a response, aside from seasonal flighting, is to advertise to The Right Audience®. In this case, the best audience for soup ads would be heavy soup category buyers, since they will be more responsive to ads for soup than audiences that never buy soup or buy very little.

Advertisers wanting to know which programs are best for advertising their products are turning to TRA's patented Media TRAnalytics® to learn what their purchasers are watching. Advertisers wondering where their dollars would be best spent for soup ads now know it is not on the top rated cable programs. Reallocating advertiser's money to the best television audience programs will help maximize the return on media investment. 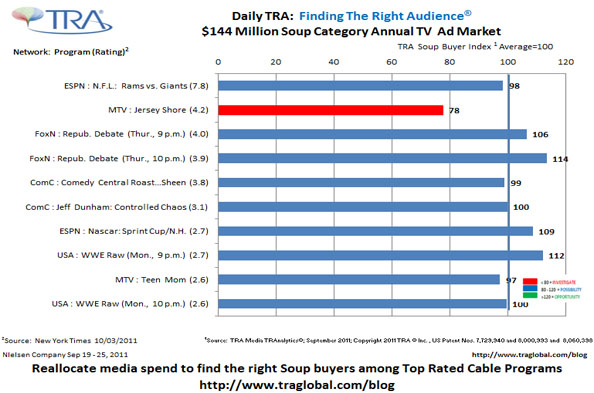