What are NCAA Football Viewers Purchasing? (ESPN vs. ESPN2) - DailyTRA

NCAA football is one of the most popular college sports in the United States and during the fall season, many networks blow out their weekend schedules just to make time to air as many games as possible. The majority of the networks airing college games are Broadcast networks, but the ESPN family of networks takes the cake by airing NCAA football programs and games from 10am until midnight. ESPN and ESPN2 have contracts with 11 of the 12 major college football conferences to air their games as well as the Division I, II and III FCS Championships. This allows ESPN to air games with teams in every region of the country.

With this being said, advertisers and networks want to know what NCAA Football viewers are purchasing. For the month of September, the top 5 Household Characteristics were the same for both ESPN and ESPN2. TRA's StoryFinder™ Report allows the networks to know exactly who they should target when selling their ad space as well as providing advertisers with the information they need to reduce wasteful spending and increase their return on investment. 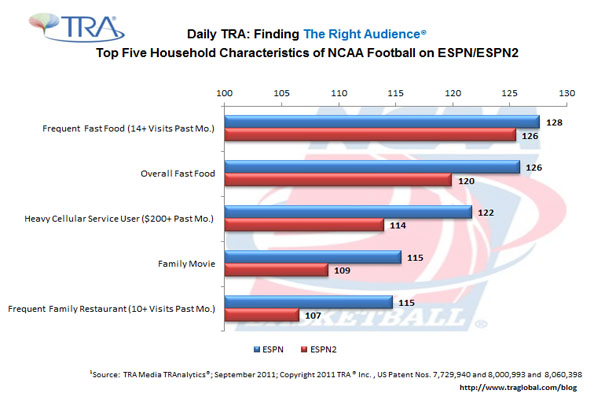