When TLC's "Dr. Pimple Popper" Puts the Squeeze On, She Changes Lives 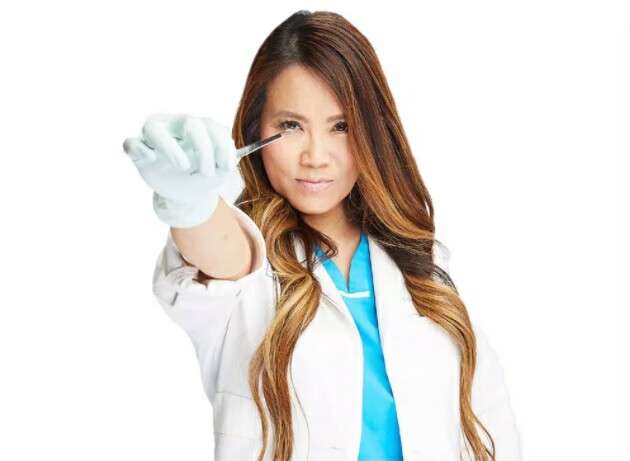 The title serves as a warning to the squeamish, an invitation to the curious, and a guarantee to its legion of fans. TLC'sDr. Pimple Popper offers happy endings. Yes, it is exactly as advertised: pimples are popped (although there are other more dramatic extractions). However, Dr. Sandra Lee, the preternaturally cheerful dermatologist and star of the show, does so much more than purge pores and lance lipomas.

This isn't reality show hyperbole. The people featured on the series don't have minor breakouts that a careful steaming and thorough extraction would clarify. They aren't dismayed by blemishes that can be covered up with a layer of concealer. Rather, many suffer from disfiguring growths of the kind that prompt inadvertent gawking from even the most polite passersby. These skin problems often keep those inflicted from living full lives. But once Lee works her magic, the patients and their loved ones usually embrace. Now, the newly healed can get on with the business of living.

It isn't until Lee sees the episodes that the emotions hit.

"Every week when I watch the show, how great the production crew is, how they put the show together, I don't know how deeply it affects them until I see that video," Lee told MediaVillage during an exclusive interview. "That is touching to me, and I am lucky that I get to see these things. All physicians make an impact on a patient's life. Here I get to see what a big deal it is. They are on their last option. Every episode, I learn something new about my patients, and it means so much to me that people are moved to tears."

It's a show where crying, or at least misting up, is the most common bodily response -- and the one to which compassionate viewers relate. The series focuses on what happens when some functions of the body go awry. The camera zooms in close as Lee removes nasty substances that fester within. The show comes with a warning about the graphic nature of it all, and the squeamish should be warned. Watching gray pus ooze out of someone's face can be nauseating. And when Lee ever-so-carefully cuts away as the insides of growths, the reactions inevitably fall along the lines of those who find it fascinating and are awestruck by the brilliance of biology and those who scrunch their eyes and squeal.

The surprise is that Dr. Pimple Popper is also inspiring.

People invariably enter Lee's office downcast, as if they would prefer to be invisible. After the procedure, they leave beaming, thanking her. They stand taller. Sometimes it's the first time they can move their head because growths on the neck were removed.

The network covers transportation and medical fees for patients to visit Lee at her Southern California practice. There, she's unfailingly upbeat to the patients and can almost always help. On the infrequent occasions that she cannot -- one recent example had a man with eruptions on his scalp, which is a tricky area to attend to -- Lee refers the patient to another physician. Most of the time, though, the person sits in her chair, Lee reassures them, then gets to work.

In the time of COVID, everyone is masked, but as she removes the unwanted, things can get messy. If one of her assistants gets splattered with gunk, Lee offers comfort. "It's never fun to get splashed, but it's not dangerous," she advises. "Just close your eyes and don't open your mouth."

It may be that some folks are more easily repulsed than others, but that is rarely the case in Lee's office. "We sort of train ourselves mentally to not be squeamish," she explained. "It is very important for me to not have any reaction with my patients. They are embarrassed in the first place. And all bets would be off if I did not have gloves or have a splash mask. I cannot cook chicken at home without gloves. It is so similar to the things I do at work. It would be disgusting to touch chicken."

Lee's straightforward approach has earned her 6.87 million subscribers on her YouTube channel. Her online presence, which led to the series, began six years ago when she posted a blackhead extraction. "It got a noticeable enough reaction for me to say, 'Why is this happening?'" she said. Those who watched "were tagging their friends, so I did it again. And it happened again, and from there I discovered there were places on the internet where people were sharing pimple-popping experiences."

Celebrity fans of Dr. Lee's include Selena Gomez, Kelly Ripa, Gwyneth Paltrow, Ashley Graham and Kim Kardashian, along with her less famous but equally loyal TLC base. All of this has made Lee extremely busy. Her practice is booming, along with her popularity. (She has for the last two years been honored with the fan-voted Critics Choice Real TV Award.) And she also oversees and promotes her skincare line, SLMD.

Interestingly, but not surprisingly, Lee grew up the daughter of a dermatologist, so she was "kind of surrounded by dermatology," she recalled. "[My father] had textbooks everywhere, and we could thumb through them, so I certainly saw some interesting pictures at a young age."

"The show represents the opposite of what is going on in the world and on TV," Lee said in closing. "There are things they try to make abnormal. For us, you start with something negative or shocking and turn it into something normal."