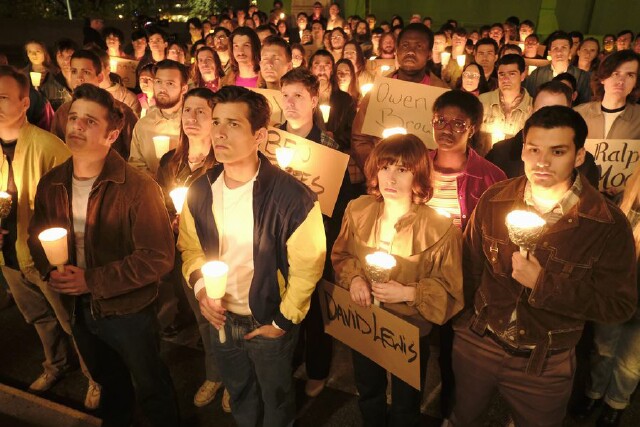 In the series Parker (pictured below) portrays real life feminist activist Roma Guy, a woman who in the process of fighting for the rights of her lesbian friends finds her true self. For Parker, the fact that network television was prepared to tackle such an important story head on made her involvement in the project instantaneous.

“It was sent to me to read pretty early on,” she told me recently while promoting the series. “I don't know who had thought of me for it, but I wanted 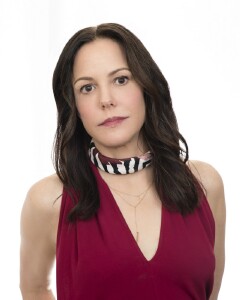 to do it immediately because it was going to reach such a large audience. I've never seen the lesbian story told on television; the history of that story.”

In preparation for the role, Parker said she and co-star Rachel Griffiths (who plays her partner) spent an extensive amount of time with their real life counterparts, Roma Guy and her wife Diane.  “It was amazing and kind of profound,” she recalled. “Rachel and I went over to their house for dinner and it was incredible, merely out of the proximity of being around them.

“Seeing them having dinner together with their family, it was very moving,” she continued. “They are unbelievably inspiring people because they fought for a cause that was bigger than themselves. I think that's what kept them going; they have that comprehensive attachment to their beliefs and are so passionate, but it's about something so much bigger than themselves.”

What most impressed Parker about Roma and Diane was the fact they were regular people who managed to effect so much change. “They are real people and open about their flaws,” she said.  “They're not running for office. They just wear their humanity on their sleeve and are not out to win you over or prove to you how heroic or stately they are. If anything it was the opposite.”

When We Rise isn’t the first project Parker has been involved with that has called for change and acceptance. In 1989 she co-starred in Longtime Companion, the first wide-release feature film to have storyline that dealt with AIDS and its impact in the Eighties on the gay community.

“Even after that [movie] came out I remember being so shocked when someone said to me, ‘I couldn’t watch two men kissing,’” she recalled. “That was like 27 years ago. It didn’t reach an enormous audience, but it did open the door a little.  I know that now it's unacceptable to say that in most circles, but at least there are circles created [now] where it is unacceptable to say and that was a step [forward] to me.”

In Parker’s opinion, fear and religion have a lot do with the lack of acceptance that still abounds.  She credits her father for instilling the beliefs she holds dear. “My father was in the military and was such a lefty,” she explained. “He was in three wars and he knew there were gay people in the military. He hated ‘Don't ask, don't tell’ and thought they should have made it okay. He was constantly showing me that you could be okay with it.

“He grew up with coal miners,” she continued. “I saw my dad, who’s now passed, welcome the gay priest I had for my entire childhood. I asked him later if he knew Father Bob was gay and he replied, ‘Oh yes.’  My mother was like, ‘You did?’ Dad was just savvy and understood things. He wanted to think forward and think beyond what was necessarily comfortable for him and what he’d been taught. He wanted to challenge himself and that's why it isn’t an excuse to me; it just isn't.”

Like Longtime Companion, Parker hopes When We Rise continues to resonate for years to come. And at a time when equal rights for the LGBTQ community are in jeopardy she hopes sharing this story via the scope of a network television platform might help ensure equality and continue to inform future generations.

“I really hope it does,” she said. “I thought it would reach more people [on ABC] and knew it was a story that needed to be told and is one that should be continued to be told for a number of reasons. Even if it wasn't so politically relevant, it would be dramatically interesting and historically interesting. It's about humanity and equality. There is no universe in which that story doesn't need to be told again and again.”

When We Rise can be seen next week on ABC beginning Monday night at 9 p.m. and continuing through Thursday.