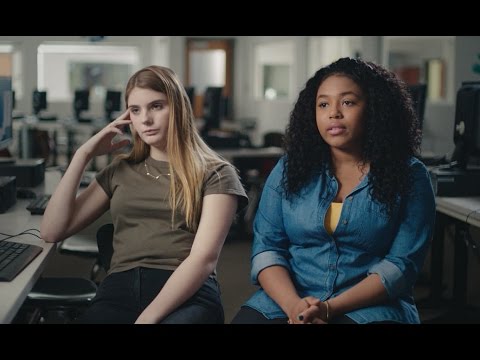 Inspired by Jack Myers' new book, The Future of Men: Masculinity in the Twenty-First Century, this is a weekly blog focused on gender equality. This week, new insights on the masculinity crisis, an ad campaign explains why girls can't code and younger generations say goodbye to the "manly man."

As evidenced by angry male Trump supporters, and even some Bernie Sanders supporters, young men are facing a masculinity crisis and stirring hostility, according to The Future of Men author Jack Myers. In a Time magazine essay this week, he explains the economic, educational and relationship struggles many younger men are confronting -- problems that stem from outdated notions of masculinity that are no longer relevant in a society that's moving toward gender equality. Myers calls for a new national conversation that focuses on redefining traditional male roles and proposes women as leaders in developing positive male role models for future generations. "Focusing on better men, dads, husbands, boyfriends and sons does not come at the expense of the rightful attention to women's rights and equality," he writes. Read the full op-ed here.

Non-profit group Girls Who Code is tackling stereotypes with satire, releasing a brilliant campaign last week that features girls sarcastically explaining why their boobs, periods, emotions and beauty routines keep them from being able to write code. "I mean, I've tried to get into coding, but my cleavage is just so distracting … I get lost in them," one girl states in the video. Another chimes in with a straight face, "When I'm not menstruating, I'm ovulating, so there's no time to code at all." Obviously, each girl's answers are meant to be absurd, and the video ends with the line: "Girls do code. Every other theory is ridiculous." While there have been past campaigns that have focused on uplifting messages to encourage girls in STEM fields, the goal of this campaign, the creators explained to Adweek, is to point out how laughable it is to assume that there are gender-specific obstacles that keep women from becoming developers in the first place. "This campaign is a little bit more about provoking a response and reaffirming what girls already know," the campaign director told Adweek. Make sure to watch the video above.

Say Goodbye to the "Manly Man"

A new survey from research company YouGov confirms that the "manly man" is becoming a thing of the past. As women outpace men in academic achievement and are slowly closing the income gap, the number of men who are primary caregivers has increased. These changing gender roles have reflected a shift in men's views of masculinity. While 65% of men over the age of 65 describe themselves as "completely masculine," only 28% of men aged 30 to 44 and 30% of men 18 to 29 say the same, according to YouGov's research. Additionally, among men under 30, 13% ranked themselves halfway between masculine and feminine and 12% considered themselves to be at least slightly feminine. As only 4% of men over age 65 say they have any feminine qualities at all, there is a considerable generational shift in perceptions of masculinity and traditional gender roles.

According to research from think tank Demos, in a three week period at the end of April over 200,000 misogynist tweets -- defined by the use of "slut" or "whore" in a non-joking way -- were sent to 80,000 people internationally, The Guardian reports. According to the study, more than half of those aggressive tweets were sent by women. Not surprisingly, celebrities and public figures were the most abused of any other group, Hillary Clinton ranking among the most targeted. Acting on this research and research that revealed that eight of the 10 most abused writers on The Guardian's website were women, British politician Yvette Cooper has launched a "Reclaim the Internet" campaign in efforts to end online harassment, intimidation and hate speech. Supported by Twitter and Facebook execs, the campaign will offer a public forum for people to put forward their proposals and concerns. While there are no clear solutions to online abuse, Cooper told BBC News, the campaign will spur international conversation on the sincerity of online harassment and hopefully impact the actions of younger generations.

How to Build a Society of Equally Involved Parents

Old White Men Could Mansplain the UK Out of Europe