“Wicked” Defies Gravity by Going from Stage to TV Screen 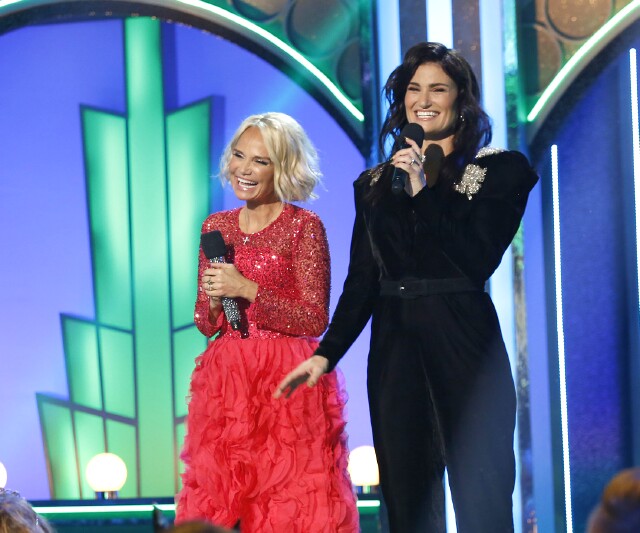 A couple of floors above the perennial Halloween atmosphere of Times Square, glittery witches queued up for a new take on their favorite musical -- Wicked, which spawned the mega-hit songs “Popular” and “Defying Gravity” (click on the videos below for a moment from each).  It celebrates women’s friendships and encourages people that they can soar no matter the obstacles.  Plus, it made stars out of its original witches, Idina Menzel (as Elphaba) and Kristin Chenoweth (Glinda).  The two reunite for an NBC special, A Very Wicked Halloween: Celebrating 15 Years on Broadway, on Monday, Oct. 29.

Ariana Grande joined them for a concert taped a couple of weeks ago at the Marquis Theatre, a large venue turned into Oz for the occasion.  The day before the taping, the stars chatted with MediaVillage about what Wicked means to them.  Although it was a day of rehearsals, Chenoweth (top left), in skinny jeans and a T-shirt that read “Overdressed,” still managed to be fancy by accessorizing with hot pink stiletto booties, silver glitter around her eyes and a custom-made beaded purse that spelled out “Popular” on one side and showed the white witch on the other.

Having won a Tony before she descended from the rafters as Glinda, Chenoweth knew Wickedwould be a hit, “as soon as I heard ‘Popular,’” she recalled.  “Then I heard ‘Defying Gravity.’  Shoot, I should have had a piece of the show.”

At the first reading “there were tears,” she said.  “I bawled my head off.”

Menzel (top right) had not read the script before she learned what would become her signature song, “Defying Gravity.”  “I felt like crying when I sang it,” she revealed.  “I really wanted to book it.  I knew I really needed to do it.  I didn’t know it would become the phenomenon it is. “

"Imagine Madonna, 1986, Madison Square Garden," Chenoweth suggested.  "In my mind, that is what it was."

Some critics disagreed, but the mixed reviews never hurt the production.  And for those who think it all began when Dorothy Gale was knocked out or ended when she came to, Wicked is the larger story of Oz before that girl from Kansas dropped by.  Composer and lyricist Stephen Schwartz had read Gregory Maguire’s 1995 book Wicked: The Life and Times of the Wicked Witch of the West and knew he could create a musical.

His vision, which resulted in Tony Awards for Menzel, scenic design and costume design, began by asking Universal producer Marc Platt to help guide the project.  Platt is also the producer behind Jesus Christ Superstar Live in Concert, which was a huge success for NBC on Easter.

NBCUniversal is no stranger to the allure of Broadway.  In addition to Jesus Christ Superstar, Robert Greenblatt, former chairman of NBC Entertainment, earlier brought live telecasts of The Sound of Music, Peter Pan, The Wiz and The Sound of Musicto the network.  Universal Live Theatrical had already invested in Wicked.

This special, however, is different, as it isn’t a stage-to-screen version of the Broadway production. Rather it is a concert of some of the show’s most beloved numbers, songs that those in the audience of the taping responded to as if in a Gymboree.  These are more than catchy tunes; they’re anthems for those feeling marginalized.

“It is such a celebration of women really being fierce and strong,” Menzel said.  Those themes have been embraced globally as more 55 million people in 15 countries have seen the show, which to date has grossed over $4.6 billion.

During the taping Chenoweth, who was playful with the audience, many in costume, asked who had seen it the most.  One man had done so 45 times, and for this loyalty he was brought on stage and awarded a T-shirt.

This taping, like all, included many do-overs.  Although Menzel received an ovation for her first rendition of “Defying Gravity,” she felt something was off and did it again.  Chenoweth also wound up performing “Popular” twice, each time taking a selfie with someone close to the stage.

Though nothing was mentioned, the biggest surprise was that Grande showed up, since this taping happened immediately after she broke off her engagement with Saturday Night Live co-star Pete Davidson.  Still, she pulled off the nearly impossible -- looking stunning in green lipstick -- and belted out “The Wizard and I.”

Another terrific singer, Ledisi, who has never seen Wicked, harmonized on “As Long as You’re Mine” with Adam Lambert, who was in the ensemble of Wickedbefore his American Idol days.  The a capella group Pentatonix performed its version of “What Is This Feeling?”

In a joyous display, a slew of Elphabas and Glindas take the stage for the finale to sing “For Good.” Chenoweth and Menzel were center stage as 10 other pairs of good and evil witches, actresses who had played them in various productions, joined in.  By the end Chenoweth could not hold back the tears, threatening to need even more glittery silver eyeliner.

“It’s in our DNA,” Chenoweth said of Wicked.  “It is all about love, inclusion and tolerance."

In addition to those themes, Chenoweth told me there's one more message she wants viewers to take away from the special.  "I hope people at home watching it will say Broadway is a big deal and will want to come and think they can.  I did, and I am from Broken Arrow, Oklahoma.  You don't make that up."

A Very Wicked Halloween: Celebrating 15 Years on Broadwaywill be telecast October 30 at 10 p.m. on NBC.