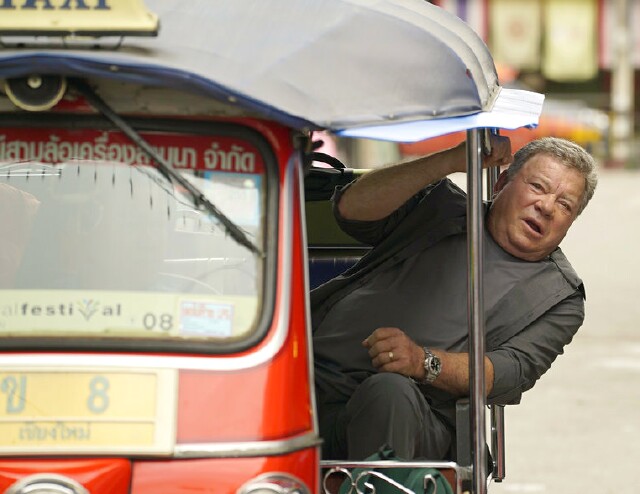 Yesterday marked 50 years to the day that the original “Star Trek” series made its debut on NBC (September 8, 1966). Interestingly, as the iconic sci-fi series celebrated that milestone anniversary, series lead William Shatner (an icon himself) was once again promoting a show for the Peacock network -- his surprise summer hit “Better Late Than Never.”  While the original adventures of the Starship Enterprise and its crew, helmed by Captain James T. Kirk (Shatner) failed to achieve warp-drive ratings, the show did prove successful enough for a three-season run. The fact the franchise is now more popular than ever five decades later was something the then 35-year-old Shatner could never have foreseen. “[The odds] are the same as those I’d bet Terry Bradshaw and I would be icons 50 years from now for "Better Late Than Never," he laughs when reflecting on the stupendous longevity of "Star Trek."

“We were doing a middling successful TV show for three years, it was canceled and everyone thought that's it and on to the next thing,” he adds. “Then slowly it snowballed and even while it was rolling down the hill gathering speed and momentum, nobody fully realized it. Every one of the [Star Trek] movies that I made, six or seven movies, they would burn the sets to have room for some other show because they figured that would be the last movie.”

With Star Trek enjoying continued big screen success under the auspices of J.J. Abrams and yet another TV series, Star Trek: Discovery, headed to the CBS All Access digital platform in January 2017, one would think it “highly illogical” that the franchise will be going away anytime soon.

It’s safe to say Shatner won’t be going away either, given the success of his new summer series Better Late than Never.

The four-episode travelogue series -- which also stars Henry Winkler, George Forman, Terry Bradshaw and Jeff Dye -- ends its run next Tuesday.  Thanks to the power of its lead-in, America’s Got Talent, along with strong word-of-mouth, BLTN has pulled in respectable numbers for the network. It seems the misadventures of five unlikely traveling companions was just what America needed over the summer. The show’s success took even its stars by surprise.

“You just don't know what America is going to watch,” admits Shatner. “We were staggering around in the monsoon season in East Asia and tripping over each other's feet, eating each other’s worms and octopuses, unshaven, unkempt and miserable at times, joyous at others. We were just fending for ourselves to try and help each other with no thought of how this was going to sell. The fact it's as successful as it is comes as a surprise, certainly to me.”

“I had no idea that the show would be successful,” echoes co-star Bradshaw. “I've been a part of four or five pilots that never made it, so the fact we got to actually shoot the show … I was just so hot and miserable and hurting, I never gave any thought that this thing would be more than what it was. [You do] four shows, then you sit around and go, ‘Will it be checked out?’  You just move on. I wanted it to continue because it was so much fun but I'm not savvy enough to know what America is going to want to watch and that is what was cool about the show.”

While Bradshaw admits he’s enjoyed watching their antics in Asia unravel as a viewer, Shatner has yet to see a single frame of the series. “I don't watch it because I don’t like the way I look,” he reveals. “The edit is always somewhat of a disappointment so I find it better to not look at what I’m doing. I'll look at it sometime.”

With all the participants down for a second installment of adventure, it likely won’t be long before NBC greenlights another season. However, with the charm of the series relying heavily on the surprise element of these four strangers engaging in fish-out-of-water adventures, could the heart of the series be compromised? Not according to Bradshaw.  “I don't think you can contrive this stuff,” he says. “You can’t make up the dialogue. You just have to do it. Therefore, I think it will still be funny.” Bradshaw also has his own take on what a second season of the series might involve. “We would take bets on which country Bill would pass away in,” he jokes. “I thought Thailand. I thought that would be a ratings grabber.”

“I'm waiting for the second season; we can call it Where Am I Gonna Die?” adds Shatner after hearing Bradshaw’s revelation. “I just hope it’s somewhere air-conditioned. I do want to go to China and India, but we’d have to do when it was cool as [the humidity] was almost our death.” For Bradshaw, Australia or Russia would provide the perfect backdrop for round two, only with one stipulation. “I’d like to do it all before we all can’t walk and talk and see,” he laughs. “Unless they do the show out of wheelchairs; then we have 10 more years.”

Leave it to Shatner to have the last word on the matter: “Then we can title it, Too Late!”

The series finale of Better Late Than Never airs Tuesday, September 13, at 10 p.m. on NBC.