By J.P. Fields February 02, 2017 View from the Grandstand Archives 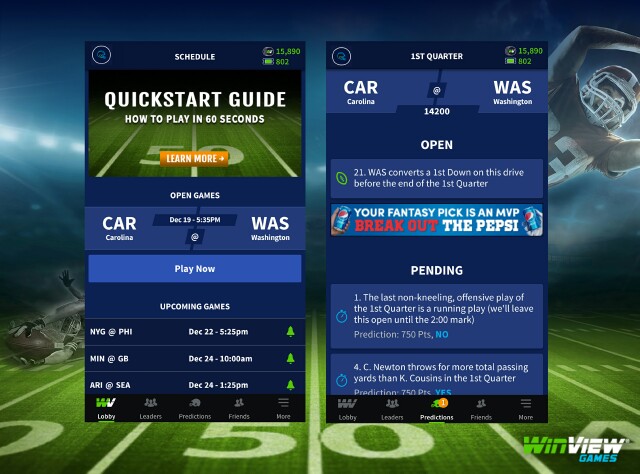 So, you think you know football? How the action will unfold on the field? What players will outperform the others? A new app from Redwood City, Calif. start-up WinView, Inc. which synchronizes live TV with mobile provides users with a chance to showcase their pigskin knowledge and prognostication skills to win cash prizes while facilitating interaction during live-game viewing. The Super Bowl LI matchup between the New England Patriots and Atlanta Falcons culminates the app’s rookie run with pro and college football, which has drawn some 100,000 downloads this past season, and has attracted PepsiCo. as a sponsor.

Tom Rogers, the former leader of TiVo and NBC Cable, and Hank Ratner, whose resume includes executive positions with Cablevision Systems and Madison Square Garden Co., joined WinView’s board with a Series A $3.4 million funding round last spring. They are now serving as Co-Chairmen, working with WinView founder and CEO Dave Lockton, who also spearheaded a previous second-screen, play-along company, Interactive Network.

Positioned as delivering a more engaging, real-time experience than fantasy sports activities, WinView is moving into an untapped and potentially lucrative market in the U.S. Rogers said predictive, second-screen services are well-established in Europe, where they represent a $12 billion to $15 billion industry, largely driven around soccer and basketball.

Rogers said the company has met with league, commissioners, TV networks and advertisers, all of whom find the app appealing because it addresses a number of concerns challenging the sports media community, notably with Millennials, who “definitely watch TV differently. There is a need to connect with Millennials as it important for the leagues and networks to reach young males in order for sports to maintain their ratings,” he noted, adding that technologies like TiVo have taught people to start watching a game 10 minutes after its kickoff as a means to avoid commercials.

Moreover, Rogers said that Millennials are not alone in burying their faces in their phones.  “It’s not just a Millennial issue, but a multigenerational issue,” he said. “Advertisers want to make sure they are getting a return on their massive expenditures in sports.  WinView is how people are watching TV today. We sync the content and advertising between the big and small screens.”

Rogers also believes that the app functions as a hedge against viewers punting on blowouts. “People tune-out lopsided games,” he asserted. “WinView can help hold their interest and keep them watching.” It can also serve as new entry point for more casual viewers. While clubs have enhanced the in-stadium and in-arena entertainment experiences, Rogers points out it has been 20 years since the introduction of high-definition TV was a boon to in-home viewing. “There hasn’t been any new magnet to give casual viewers a reason to come to the set more often,” he said, noting that WinView creates a new level of excitement by tapping how fans watch games together or communicate about them via social media.

The interactive contests are guided by producers, who pose the questions in real-time with the queries shaped by the action taking place on the field. Rogers said that while anyone can engage, early returns favor those with football acumen, as a number of strong players have already emerged.

There are multiple advertising opportunities within the app’s various mobile screens: the lobby and schedule area; rooms, where players can join at bronze (free), silver and gold levels (requiring earned tickets and proffering higher WinCoin payouts); leaderboards, depicting 20-player competitions and the global leaderboards; chatroom, which encourages social competition and friendly rivalries and banter;  new questions; the yes and no predictions; open/pending predictions, and resolved predictions, indicating whether a play has won or lost and how many attendant points.

Players can also watch brief sponsored videos as an incentive to garner 10 free tickets, which are used to gain access to higher payout rooms.

Pepsi, which joined as exclusive sponsor late in the season, will continue its presence during the Big Game. During the NFL championship, WinView is offering $10,000 in prize money, with different pay-out pools evenly divided at $2,500 for each of the four quarters, affording participants a fresh start during each period and another chance to win.

Rogers said WinView didn’t open the door to sponsorship until late in the football season. “We lit up the advertising opportunity in late November and Pepsi came on board,” he explained.

“We’re always looking to stay at the forefront of emerging technology and social media and how it is enabling fan engagement,” said Adam Harter, Vice President of Cultural Connections at PepsiCo. “We love WinView’s vision for adding value to the fan experience.”

Harter said PepsiCo plans to monitor the expansion of the app and its audience of players. “We’re keeping a close eye on their growth as they continue to gain scale,” he explained.

The company’s game plan calls just for that.  Rogers said WinView “has yet to put its full shoulder behind marketing,” cutting off such efforts after five weeks, while work was completed on the app.  Nevertheless, WinView quickly scored 100,000 downloads. “Our cost of acquisition more than validated our plan relative to attracting people to the app,” he said.

WinView, which recently tipped off play-along games against NBA action, will resume marketing in the weeks ahead around pro basketball’s All-Star Game and playoffs, the NCAA March Madness basketball tournament, and the start of the 2017 Major League Baseball season.

The return of baseball, in which WinView will offer players new games in three-inning intervals, will also bring a new opportunity. “At some point in the spring, we’re going to introduce a pay-for-play infrastructure with baseball,” said Rogers.