"With Love" Is the Heartfelt Holiday Rom-Com We All Need 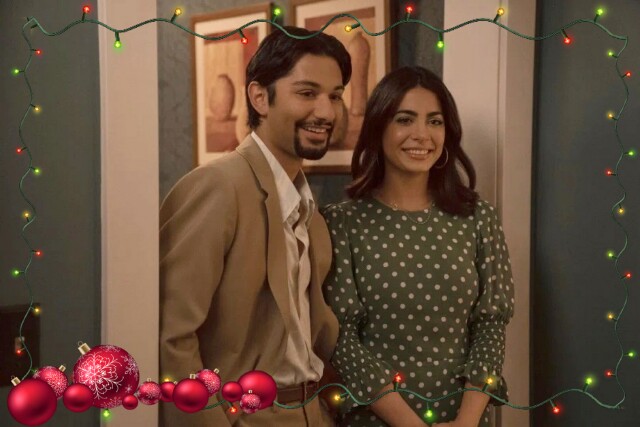 Prime Video's new limited series With Love, from One Day at a Time co-creator Gloria Calderon-Kellett, is a rom-com dramedy about the love lives of two siblings, Jorge and Lily Diaz, set against many months of holiday celebrations. Their stories and those of their family and friends make for a collectively charming tale of family, love, independence and self-discovery. It all feels custom made for the holiday season but would be equally welcome at any time of year.

In the first episode, which takes place at Christmastime, Jorge brings his boyfriend Henry to the Diaz' annual Christmas Eve party to meet the fam for the first time. Lily's situation is the opposite: She had recently dumped her long-time boyfriend – a man everyone was hoping she would marry -- and when she realized she made a mistake, she unsuccessfully tried to win him back, making her even more miserable. So, Lily turns to Jorge’s sexy best friend and roommate Nick, who becomes more than a one-time hookup. Meanwhile, the Diaz parents -- Beatriz and Jorge Sr. (Benito Martinez) -- are experiencing a bump in the road in their marriage.

This episode really sets up the emotional journey that all these characters are about to embark upon. Jorge wants to impress and be accepted by his father, Henry hopes to be welcomed by Jorge’s family, Lily wants a happily ever after with the man she loves and Nick wants to move beyond his womanizer phase and maybe find "the one." None of their journeys make for smooth sailing as they continue to unfold over New Year's Eve, Valentine's Day, the Fourth of July and Dia De Los Muertos (Day of the Dead).

Jorge, wonderfully played by Ugly Betty alum Mark Indelicato, has a profoundly tender scene with his father. He's worried about introducing him to Henry, given how long it took him to accept his son’s coming out. When Jorge tells his father he really wants him to like Henry, Jorge Sr. replies, "I love who you love." It's a powerful moment that had the tears flowing, not just from the characters but from me, as well. As a queer Latino who is part of a deeply religious and conservative family, I know how hard these conversations can be (and still are) for many LGBTQ+ people, and it was handled so beautifully.

It's very apparent right from the start that a lot of loving care went into the entire series – and particularly this storyline. Calderon-Kellett always handles this subject matter with great strength and sensitivity, as we saw with Elena's coming out in One Day at a Time.

In this scene and throughout the series Indelicato’s performance is magnetic and commanding. His character's big personality, sharp attitude and love of "hot goss" (as in "gossip") sometimes intimidates Henry, endearingly played by Vincent Rodriguez III (Crazy Ex-Girlfriend), who is more quiet and reserved, driven by his work life and truly head-over-heels for Jorge, despite not always externalizing it. The two perfectly balance each other out. (I can relate here. I'm the Henry in my relationship.)

Just as big and bold as Jorge is his sister Lily, played by Shadowhunters alum Emeraude Toubia. She's all charm and charisma as Lily, navigating her rocky love life as she discovers what she wants for herself. In true rom-com fashion she eventually connects with two handsome suitors -- Nick, played by Desmond Chiam of Falcon and the Winter Soldier, and Santiago, played by Rome Flynn of How to Get Away with Murder. Of course she has to choose one or the other. Viewers have already taken to social media declaring #TeamNick or #TeamSanti. (How can she lose?) 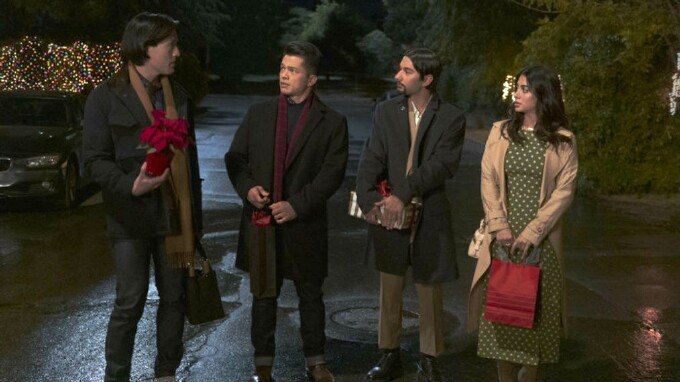 Nick is just as charming as Lily, with his loveable jock swagger, but he is perhaps the wisest and most level-headed of the group, giving his self-proclaimed sage advice to his friends when they least expect it but unknowingly need it most. Chiam plays the self-assured womanizer side of Nick to great effect -- but he also has quiet, impactful moments that have viewers rooting for him.

Like Henry, Santiago is more of a reserved guy, doesn’t like parties and keeps to himself. He's another sensitive tough guy, remaining very close with his father after the recent death of his mother. Santiago isn’t necessarily looking for a relationship, but when he crosses paths with Lily, it is clearly love at first sight.

Calderon-Kellett pulls surprising double duty as creator/showrunner and a member of the cast: She portrays the Diaz’s hilarious Tia Gladys, who is living her best life without kids or marriage and with plenty of vino.

In a subtle way, but to great effect, With Love acknowledges the differences in traditions between different Latinx cultures. (This is something rarely if ever touched upon in American television programs, and in my opinion it's the very definition of "meaningful representation.") While the Diaz family is Mexican, Santiago and his father are of Cuban descent and celebrate their holidays in different ways. As someone of Salvadoran descent with family from Mexico, Colombia and Puerto Rico, this exploration of differing traditions and celebrations was wonderful to see.

With Love is just as much about independence and self-discovery as it is about the pursuit of love and romance as the Diaz siblings, family and friends explore what love means to them, how it defines them and how much they depend on it, for better or worse. To recall a classic song, it's what the world needs now.

With Love is available to stream on Prime Video.