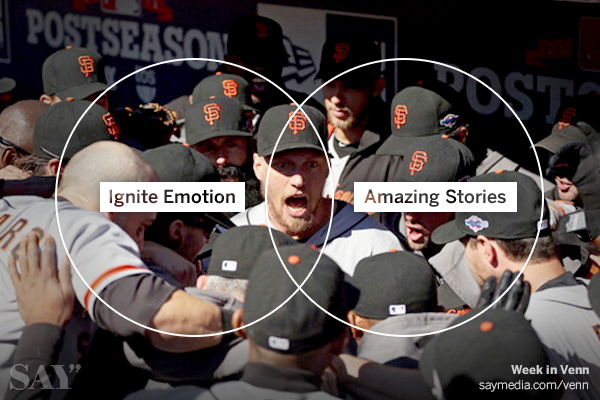 In the sports world and especially around the Bay Area, Hunter Pence is a hero who sparked one of the most incredible playoff turnarounds in the history of baseball. Even casual fans learned some lessons this season from the San Francisco Giants about the richness and rewards of tenacity, focus and selflessness.

As a former professional ballplayer, I have never seen anything like it. It will go down as another chapter in the Giants' storied history, rewarding loyal fans that have followed the team since their childhood – and it will forever shape the San Francisco Giants brand. As a marketer, it was another great reminder about the power of storytelling - and an example of how brands can think about their always onstrategies in a way beyond content geared for search engines and SEO.

It started with Pence's first speech, when the team was down 2-0 in a best of 5 series. He gathered the team shoulder-to-shoulder, with their arms locked like a football huddle, and implored his teammates:

"Look into each other's eyes … this is the best team I have ever been on, and no matter what happens we must not give in ... I need one more day with you guys… play for each other not yourself, win each moment. Win each inning. It's all we have left."

The Giants won the game, and a tradition was born. The ritual continued before each game, beginning as a solemn moment, and then erupting into a dance and a rally cry.

The story took off, attracting huge earned media, as bloggers and mainstream outlets across all mediums picked up the story. From coffee shops to restaurants to bars, people were talking about Hunter Pence and how he rallied the team. Players, fans and media started calling Hunter, "Reverend" Pence.

So why did this capture people's imaginations to become one of the most memorable moments in Giants history?

It was an electrifying story that led the team to the second World Series victory in three years. It was human, and cut beyond the day-to-day of hitting, throwing and running. It tapped into the team's (and fans') emotions. It made the whole experience that much more real. Stories connect with people and compel them to spread the word. In the digital world this happens through comments and social sharing and offline, through word of mouth. That's the power of storytelling.

David Tokheim is SVP of Media Solutions at SAY Media.