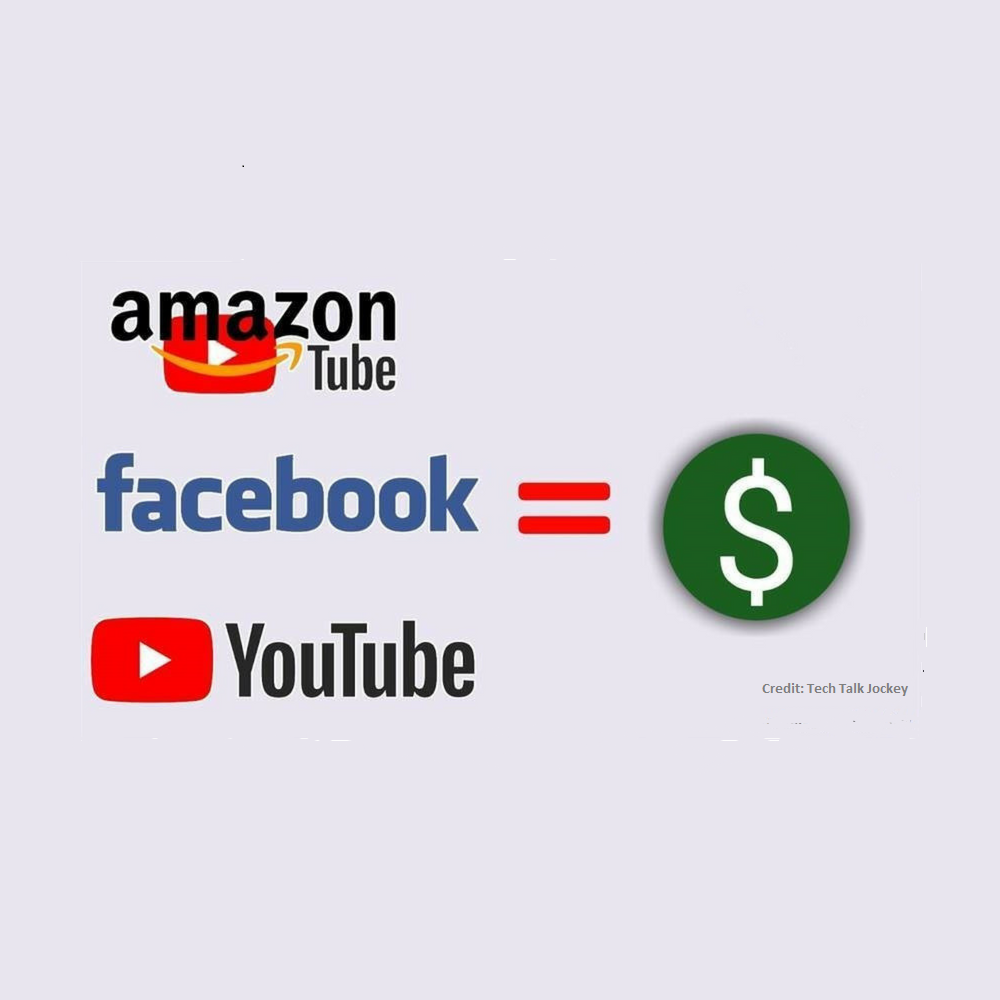 Is it a real story or "fake news" that the share of digital ad spending invested in Google and Facebook will decline for the first time this year, from 58.5% to 56.8%?  Using questionably sourced data from eMarketer, the prediction of looming declines in ad spending share made Wall St. Journal headline news, burying the actual news that the two companies will capture a dominant share of a projected $14 billion in annual digital ad spend increases through 2020, driving 15% to 20% average annual growth for both companies.  The primary contributor to a decline in the share of digital ad investments going to Facebook and Google is Amazon, which Jack Myers TomorrowToday projects will grow from $2.8 billion in 2017 ad revenues to $16.5 billion in 2022, with most of the dollars shifting from marketers' "below-the-line" commerce, promotional and retail slotting allowance budgets rather than from Google or Facebook.  Rather than further depressing the outlook for Google and Facebook, however, Amazon's growth further accelerates the shift of marketers' budgets to walled garden commerce-focused platforms, thereby increasing -- not reducing -- the ad revenue growth of Facebook ad Google.

In my recent commentary "Where Are All the Ad Budgets Going?" I wrote, "Media executives can ask when marketers 'will ever learn' that their growing dependence on three companies is misguided, but many marketers are learning -- and the more they learn the more they shift budgets away from traditional media options to mobile, commerce, cost-efficient and measurable performance-and-commerce-based content distributors." To suggest in the Wall St. Journal that either Google or Facebook are facing a negative economic picture, as eMarketer has done, is naïve. The WSJ headline "Google, Facebook Lose Ground in Digital Ad Share" is arguably accurate, but it is misleading and sends an inaccurate message to the investment community.

Of course, investors have responded to the recent and distressing news about Cambridge Analytica and inappropriate use of Facebook data by selling off both Facebook and Google shares. Facebook has had more than its fair share of data-related challenges. Both companies are confronting concerns about brand safety. However, based on Jack Myers TomorrowToday research, we believe there will be minimal negative impact on advertising revenues for both companies. Both Facebook and Google have millions of "long-tail" advertisers who depend on the companies for their retail and commerce marketing. Cutting back on these budgets would be analogous to cutting back on Yellow Pages advertising in 1950. These advertisers represent a reported 80% of Facebook and Google ad revenues. A large percentage of the remaining 20% are also purchased through 'programmatic' systems delivering on the targeted reach goals of leading national and regional marketers and are also unlikely to be impacted by competitive alternatives. According to the Jack Myers TomorrowToday research, 64% of advertising decision-makers are planning to increase their Facebook ad investments in 2018 and 55% plan increases in Google/YouTube ad spending. Only 7% and 11% respectively plan to reduce their budgets for the companies.

Bottom line, if investors are basing decisions on ad revenue projections for the two industry leaders, we refer you to both Brian Wieser's commentarypublished at Wall St. Speaks Out and to recent MoffettNathanson commentaries.

MediaVillage has no relationship with Facebook and is retained for research and content publishing services by Google. Jack Myers has no investments with either company.