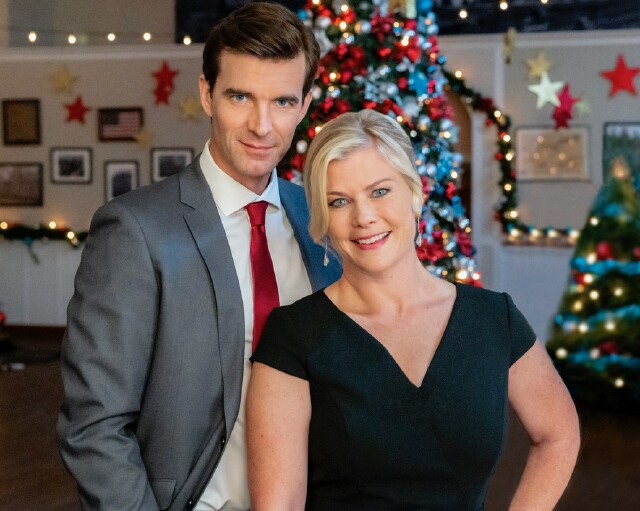 Her association with Hallmark Channel and Hallmark Movie & Mysteries dates back to 2013, so it’s a natural assumption that Alison Sweeney would have a slew of holiday-themed projects among her credits.  However, you may want to hold that thought.  “I love Christmas, but [2017’s] Christmas at Holly Lodge was actually my first Christmas movie ever and it was super fun,” laughed Sweeney when MediaVillage spoke with her exclusively about her new Movie & Mysteries holiday project, Time for You to Come Home for Christmas.  “I guess being such a part of the Hallmark family now, people sort of associate me with, well, you can fill in the blanks.  It’s such a specific thing being a part of the Miracles of Christmas on Hallmark Movies & Mysteries, or Countdown to Christmas on Hallmark Channel, but for me, I’m definitely aware that I’ve only done two Christmas movies, and I want to do more!

“One of the Murder She Baked movies did have a Christmas element to it, as it happened at Christmas,” she continued.  “But I feel that wasn’t really a Christmas movie, so I was thrilled at the chance to do it again.  My husband always asks how I find the time, but we’d wrapped Chronicle Mysteries for the year, so when they approached me the timing was perfect.  I loved the story because it was so inspiring and beautiful, and I was thrilled at the opportunity to be included.  On top of that, I loved filming it!”

Time for You to Come Home for Christmas is a follow-up to last year’s Time for Me to Come Home for Christmas (but with different characters), again executive produced by Blake Shelton, alongside his mother, Dorothy Shackleford, and based on his song and her book of the same name (written with Travis Thrasher).  Sweeney plays Katherine, a single widowed mom venturing to her Virginia hometown for the holidays.  Along the way she encounters friendly stranger Jack (Lucas Bryant, pictured above and below with Sweeney) on a train, journeying to perform at the town’s annual Christmas dance to benefit military families.  As the two repeatedly encounter one another a close friendship develops, and as Jack endeavors to solve a mystery about a coin from his past, the results lead to new beginnings for both of them.

“It also absolutely has a lovely mystery element to it,” she added. “It was fun for me reading the script as I didn’t know how the story would end or how it was all connected. Jack has this coin, and he’s trying to figure out who it belongs to, and he doesn’t mention it to my character, so I was reading all of his scenes asking myself, ‘What is this coin?  Who owns it?  How is it connected to him?’  When it all comes together it’s an emotional, lovely story point.” 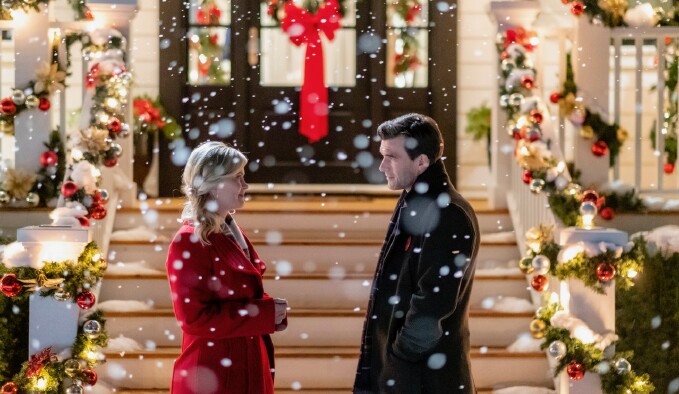 Thanks to Murder She Baked, and her continuing Chronicle Mysteries series, Sweeney’s name has become synonymous with the Hallmark Movies & Mysteries brand, so having a mystery through-thread felt organic to her.  Portraying a protective, grieving single mother only enhanced the experience.  “Obviously, playing Sami Brady for so many years on Days of Our Lives, there’s no stone unturned when it comes to characters and what they will and won’t do,” she laughed.  “But with every script you pick up, it’s finding the right character and balance.  A role like [Katherine], where my character has a son who is 10, is something I can identify with from my own life.  In Hallmark movies especially, you can pull into characters because they are relatable.

“I wanted Kat to be a person that audiences could identify with,” she continued.  “I think moms everywhere know that feeling of trying to protect their kids from deeper emotions and not wanting to see them feeling hurt.  A lot of those instincts come naturally to moms and parents.  Reading the script these were all things I identified with about my own life.”

Sweeney told me that after signing on late to the project she wasn’t involved in the production of the film, so encountering Shelton didn’t happen.  “But I’ve met Blake many times at different NBC events,” she said.  She also revealed the film has a musical element, one from which she was “thankfully” given a reprieve.  “Lucas is so talented,” she shared. “He’s a great actor, and he plays guitar and sings, so it was wonderful to see him pull out all the stops.  I’ve had my moment in the sun regarding [singing], so these days I let the professionals stand up and do their thing.”

With the holidays set to be super busy for the Sweeney clan (including a mountain ski trip, followed by some beach time) she told me the Chronicle Mysteries team is hard at work coming up with new ideas for next year.  She also has her sights set on another Christmas project, along with (she hopes) some on-screen romance.

“I have some story ideas in the romantic comedy vein,” she revealed in closing.  “I miss doing them, and while the mysteries are super fun and I love them, I do miss the romance.  It’s something I don’t want to let slip away.”

Time for You to Come Home for Christmaswill be telecast Sunday, December 8 at 9 p.m. on Hallmark Movies & Mysteries as part of its annual Miracles of Christmas programming event.