"America's Got Talent" and Simon Cowell Get Better with Age 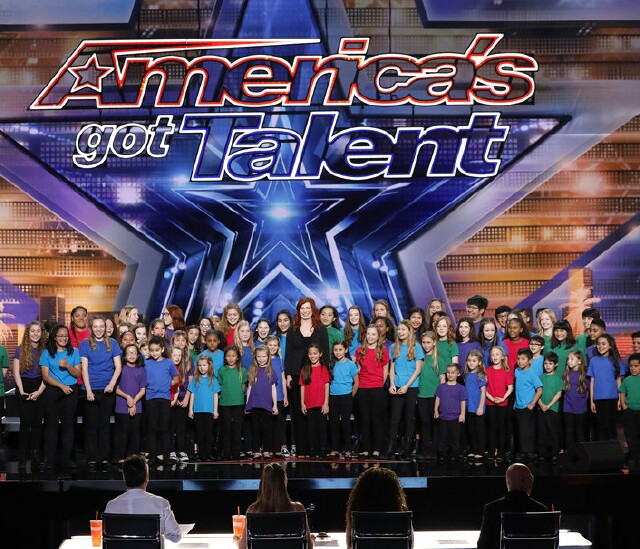 Every summer I write a column in praise of NBC’s America’s Got Talent, calling it the most reliably entertaining of all the original series with which the broadcast networks wisely fill their schedules between Memorial Day and the start of the “traditional television season” (an increasingly antiquated term) in mid-September.  But as the years and seasons go by -- and as the show defies the trajectory of virtually all such reality competition shows by actually improving with age -- I’m going to amend my annual rave and instead refer to AGT as one of the best shows on television, period.

I didn’t always feel this way about the show, which has been wildly uneven over the years as it has gone through many different judges and hosts, more so than any other reality competition program that I can name.  But it finally settled a few years back on a foursome I would define as the best panel of judges on any such show ever.  The four-way chemistry between Howie Mandel, Mel B, Heidi Klum and Simon Cowell (pictured below left to right) is as golden as the coveted buzzer (visible in photo) the judges occasionally slam when they decide to allow an especially talented act to leap from the first round of auditions to the live shows.  I have liked this group from the start, but as they have continued to work together and bond they have become as watchable and welcome as the Simon Cowell-Paula Abdul-Randy Jackson triumvirate on the early (and best) seasons of American Idol … but without the looney tunes that trio brought to the party every week. 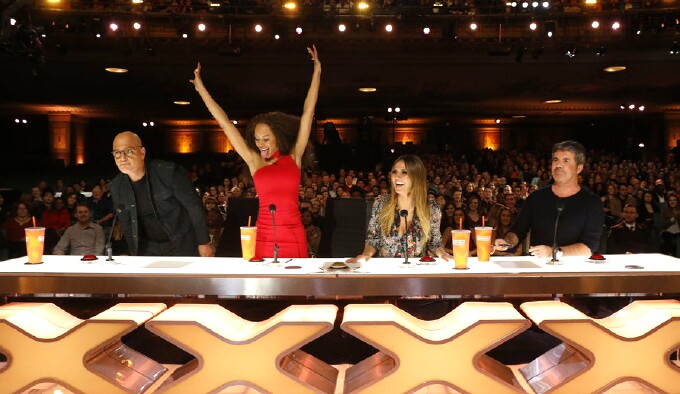 Speaking of Cowell, I think one big reason AGT is so strong right now is that he has matured into a wiser, more thoughtful Simon.  He has definitely improved with age, still refusing to suffer fools but showing a more compassionate side in the way he responds to and nurtures true talent.  He recently encouraged Jeffrey Li, a nervous little boy who was about to sing, to do his best by offering to get him a dog if he did well.  The boy nailed a rendition of Josh Groban’s “Raise Me Up,” and Simon seemed genuinely happy to be able to promise the boy a pet.  (Let’s hope it’s a rescue dog.)

Equally impressive, we are at long last not just watching Simon do his work; we’re being allowed to see how he works.  Cowell did something amazing with a classical crossover singer named Daniel Emmet, stopping him in the middle of an original song he was performing, telling him he had a strong voice but was singing the wrong song, and then handing him a song made popular by Il Divo, one of the many musical acts Cowell has produced, to quickly learn.  He had one hour to get it down and then return to the stage to get it done.  Daniel crushed it, and for the first time that I can remember dating back to the start of Idol Simon let us see him in action.

Perhaps this is the right moment to note that I think AGT has become the top singing competition on television.  (Sorry, ABC.)  I swear every week I hear one or two singers that I think should win the season's grand prize.

AGT also continues to impress as a showcase for magicians, dance troupes of all stripes and gymnasts.  Or would the better word be “acrobats”?  Who cares?  The daredevils on the AGT stage are breath-takers.

And of true interest, AGT remains a sublime showcase for its primary sponsor, Dunkin’ Donuts, with those eye-catching orange day-glow DD cups perched within reach of each judge at their table, where they are always on camera, and the occasional backstage bits in which the judges visit the DD lounge and have a sweet treat.

On a recent show, tho, the DD partnership hit new heights when a little boy who was part of a high-octane ensemble asked for a favor after the applause had died down.  He asked Simon for a donut!  Moments later a box of Dunkin’ Donuts was rushed onto the stage and displayed in closeup as the boy delightedly made his choice.

This may sound like a carefully orchestrated marketing move but it didn’t play that way.  It seemed spontaneous and authentic and, as such, absolutely priceless.

It seems AGT still runs on Dunkin.’  Every time I watch the show, and every time I see those same orange cups for sale at my local Dunkin’ Donuts, I’m reminded of that simple fact.  Long may this tasty partnership continue to satisfy.

America's Got Talent is telecast Tuesday at 8 p.m. on NBC.