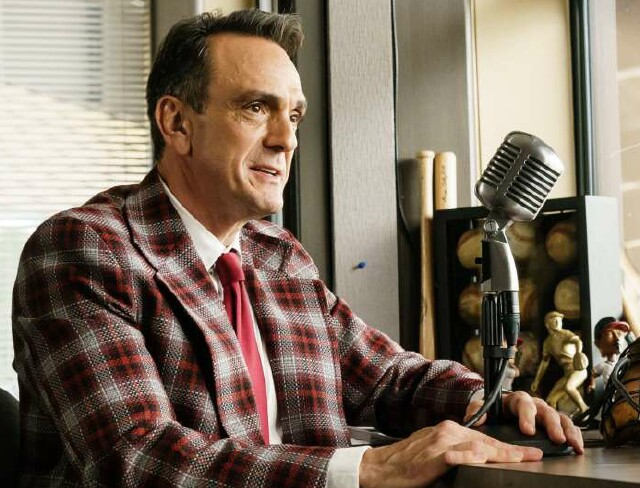 Jim Brockmire, a character created and played by Hank Azaria, may in fact be the single most interesting fictional man in the extended world of baseball.  Watching him is akin to driving past a fiery accident on the highway, if that blazing inferno had an outdated plaid blazer and the voice of a seasoned baseball announcer.  Jim is the perfect mix of charisma, narcissism and self-loathing, and he is a joy to watch.

IFC’sBrockmirespent its first season introducing us to the alcoholic, drug-abusing baseball announcer who -- after his wife Lucy (Katie Finneran) cheated on him with like, everybody -- had a potty mouthed meltdown while calling a live major league game.  This resulted in his getting fired and spending ten years in self-exile, mostly announcing cockfights and going on sexual escapades in Asian countries.  Eventually he returned to America, thinking the world had long moved past the unfortunate events of yesteryear, but he’d forgotten about one little thing: The Internet.  His pain had gone viral.

He found all this out after Jules James (Amanda Peet), the ambitious owner of a minor league baseball team, hustled him into becoming the field announcer for her extremely mediocre Morristown Frackers.  She also introduced him to Charles (Tyrel Jackson Williams, pictured below right with Azaria), a young, baseball-illiterate digital media guru and Jim’s assistant in the booth.  With no other options left, Jim reluctantly chose to make the best of what he had left and maybe get back to the majors -- or die barely trying. 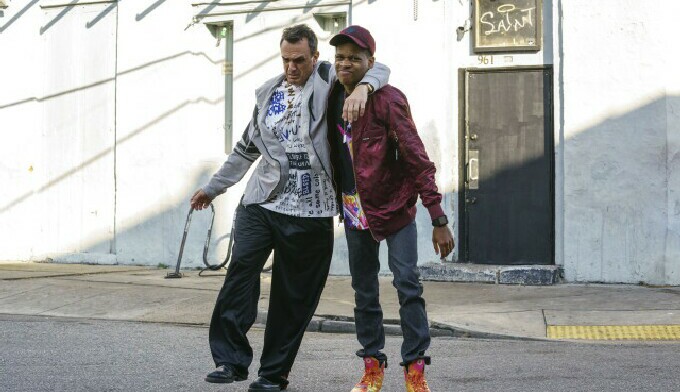 The first season acted more as a semi-love story between Jim and Jules, and had a plot that was similar to the movie Cars --“a hot-shot race-car baseball announcer named Lightning McQueen Jim Brockmire gets waylaid in Radiator Springs Morristown, PA, where he finds the true meaning of friendship and family.”  The narrative arc balanced the lows of Brockmire’s depravity with the levity that came with his having possibly met his match in Jules.  She could drink him under the table, never really judged him and owned her sexuality big time.  The dissolution of that balance was depicted during the season finale when, after helping her save the Frackers, Jim told Jules he was leaving for a better announcing gig in New Orleans.  She, of course, said she would not leave the hometown she’s dedicated to saving, and deep down I think he knew that.

Ouch.  Hard to believe the second season gets even darker than that, but ... yep.

Throughout Season One Jim had been building a pretty damn successful podcast with Charles.  The fruits of their labors (well, Charles’ labors, Jim mostly drank) become abundantly apparent in the second season.  No spoilers, but we do end up seeing exactly what makes Charles and Jim such a great team.  We also see exactly what doesn’t.

Make no mistake:  Jim is an addict battling depression.  That much has been obvious from the start.  Without Jules in the picture, however, the levity that came with their tit-for-tat relationship has left room for something a little less fun: the truth about himself.

That said, structurally this is a tighter season.  The monologues, the bits and gags, the musical cues, even the gravity of the topics dealt with in the series and how they are dealt with all feel like they’ve been stepped up a notch.  For example, Season One of Brockmire didn’t get me to literally laugh out loud until about two thirds of the way through the first episode.  Season Two pulled it off in the first two minutes.

The opening shot of the second season finds Brockmire lying on the floor, his head resting on the naked bottom of a well-endowed black woman.  He then begins what turns out to be a very elegant monologue about America's transition from a “boob country” to an “ass country.”  Designating breasts as the preference of the white man, he then correlates the rising popularity of the derriere with the growing influence of non-white and non-straight cultures.  It is a hilarious and unapologetic commentary on an overlooked trend in society, and serves as the perfect example of the show’s growth.

The beauty of Brockmire is the emotional nuance and comedic timing of the character, coupled with the unbelievably quotable jokes and super solid plot.  There is no Jim Brockmire without Hank Azaria, but there is no Brockmire series without the writers.  If Azaria provides the steak, then the sizzle definitely comes from the writers’ room. Casting did a hell of a job as well, indicated by the fact that I can’t imagine anyone other that Amanda Peet as Jules or Tyrel Jackson Williams as Charles.  Kate Finneran as Lucy, real-life sportscaster Joe Buck as himself, Hemky Madera as Pedro Uribe (one of my faves) and the additions of Dreama Walker and Utkarsh Ambudkar in the second season make for what I would call “best case scenarios.”  If I could recast this show myself, I wouldn’t change a thing.

Brockmire’ssophomore season surpasses its predecessor by leaps and bounds, which is saying a lot, because its freshman season was amazing.  It is undeniably one of the best shows on TV.  Apparently IFC feels the same way, because it’s already been green-lit for two more seasons.

In the words of Jim Brockmire himself, “Justice, sweet justice!”