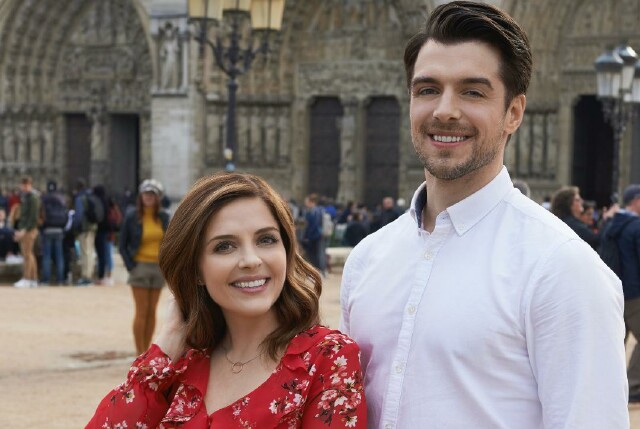 After recurring for four seasons as Brandon Russell in the Hallmark Channel’s spirited series Good Witch, Dan Jeannotte is ready for the next step -- Hallmark movie fandom.  Accordingly, he is making his Hallmark movie debut this weekend in the premiere of Paris, Wine & Romance (opposite Hallmark favorite Jen Lilley, pictured above and below with Jeannotte).  "Should I be scared?" laughed the actor when MediaVillage recently noted that he is on the cusp of Hallmark movie stardom – something many actors covet.  "You know I'm ready for it!  This was so much fun.  We made a movie about wine and romance in Paris -- what's not to love?  I could tell reading it on my laptop in California that it would be great.  Thinking about it, maybe I should have been drinking a glass of wine when I read it.  But it may have been about 9 o'clock in the morning.

"This was my first Hallmark movie and that feels great," he continued.  "Having been on Good Witch I've felt like a part of the extended family.  A lot of my actor friends have done Hallmark movies and I'd heard they were great fun.  That was true of my experience, too.  I'm looking forward to surprising the fans when they find out I'm not actually French."

In fact, for Jeannotte (who also starred on The CW's Reign from 2016-17) being a Hallmark lead may have been pre-ordained.  "This [may] be just a happy coincidence, but having now done this movie, I think I'm the fifth person from that show’s cast to become the romantic interest in a Hallmark movie.  I’m not sure why those two worlds cross over, but since then I've been told I'll definitely get to do another.  I’m just waiting for that call."

In the film Jeannotte stars as renowned vintner Jacques Fournier, who, hailing from one of the world’s foremost winemaking families, is no stranger to receiving gold labels at the annual Le Grand Prix De Vins Du Monde (a prestigious wine competition).  Enter Isabella Ricci (Lilley) the ambitious owner of the Oregon-based Ricci Ridge Winery, eager to take her product to a global level.  While in Paris for the competition, Isabella encounters Jacques, who’s instantly impressed by her eagerness and offers his help to open many closed doors for the newcomer.  As the duo bond and doors begin opening their hearts quickly follow. 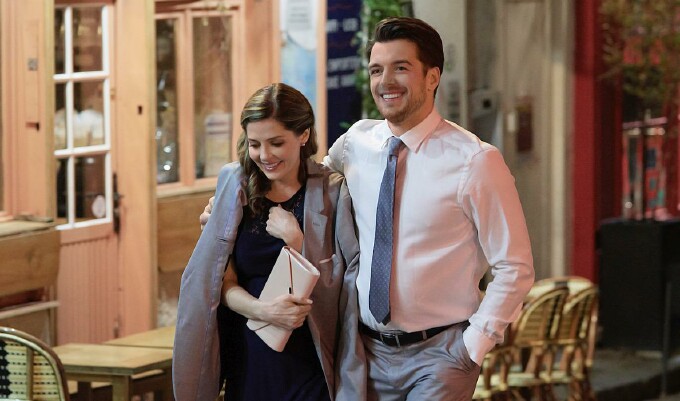 For Jeannotte, getting to work with a Hallmark veteran like Lilley was the perfect way to launch his Hallmark movie career.  "I was brought on kind of late," he shared.  “I think I read the script maybe a week and a half before we started shooting.  Jen was already attached.  We’d never met, but I saw she had done a ton of Hallmark movies and they usually have to be made pretty quickly.  It was nice to know that Jen, being a veteran and a professional, would be someone good at her job.

"But you never know if you're going to get along," he added.  "Luckily for us, we did.  I basically met Jen on the set.  She shook my hand and said, 'Hello, I'm Jen, I'm five and a half months pregnant.'  That I didn't know.  We shared many jokes off-camera about how romantic this movie was and she's already pregnant.  The fact she's [already] a mom to her foster boys and I'm a dad to a three-and-a-half-year-old, it was really nice to have someone to connect with about family and how tough it was being away from our families for three weeks.  We had each other to commiserate with."

Not that either actor really had much to complain about -- after all, they were shooting in Paris -- except for maybe those cobblestoned streets.  "Jen would do 14-hour-days, walking in heels on [those] streets," Jeannotte explained.  "It was really impressive that she was doing all of this and creating life.  Jen isn't one to make a fuss about herself, so I'd check in constantly and try to be her right-hand man and make sure she was taken care of."

The project also posed Jeannotte with a challenge.  "I speak French, but the idea of doing a French accent was one of the biggest question marks for me," he revealed.  "Nobody thought to ask if I could do a French accent, although I knew I could.  Still, speaking French with an English accent are two completely different things.  I'm from Montréal, which gave me an advantage, but the French spoken in Québec is very different from France.  The trick was not to make it a caricature; as the romantic lead, it can’t sound cartoonish."

In addition to a great love story, Jeannotte is thrilled for Hallmarkies to embark on a first-hand sightseeing tour of some notable Paris landmarks like Sacré Coeur, the Eiffel Tower and Notre Dame.  "The news of Notre Dame was devastating," he said of the recent fire that ravaged the famed structure.  "We were just there a week and a half before, so it was a little like an out of body experience watching the news.  I asked the director if there was any conversation about removing the scene, and because it wasn't destroyed the network felt it wasn't inappropriate to show it.  If anything, it lets people see that beautiful place in a nicer moment.  It's a nice memory as we may have been one of the last film crews to shoot there before the fire."

Paris, Wine & Romance will be telecast Saturday, May 4 at 9 p.m. on Hallmark Channel as part of their annual Countdown to Summer programming event.