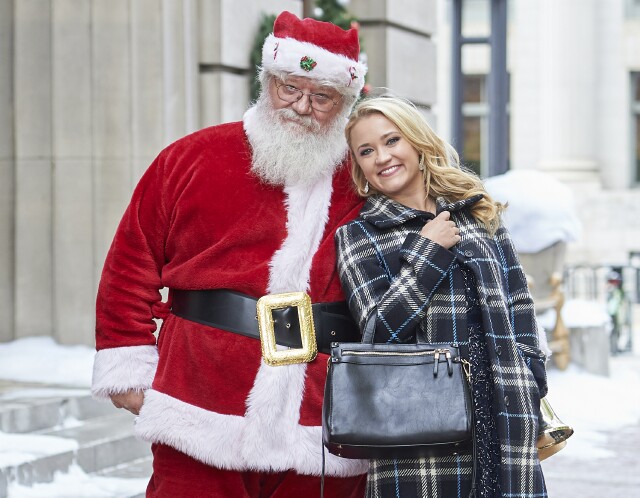 Hallmark Movies & Mysteries continues its Miracles of Christmas programming event this weekend, introducing a fresh face to the Hallmark family when Emily Osment makes her network debut in Christmas Wonderland.  Osment appeared on series like Friends before taking the role of Gerti Giggles in the Spy Kids movie franchise, yet it is the role of Lilly Truscott, Miley Cyrus’ best friend on Disney Channel’s Hannah Montana, for which she is best known.  It’s hard to believe Osment, 26, is just now making her Hallmark debut, but as she told MediaVillage, now was the time.  “I received an e-mail one day saying [Hallmark] wanted to do a Christmas movie with me,” she recalled.  “I grew up watching Hallmark Christmas movies -- anything Christmas.  My family loves Christmas movies.  There's usually a bunch of reasons you do a movie, but for me the opportunity to get out of town and drive my car to Utah where we shot it, was great.  It came at the perfect time so when it landed in my in-box I was like, ‘Let's go!’

“I knew they were also interested in having Ryan Rottman on board [to co-star],” she continued.  “I know Ryan as we run in the same circles and I follow him on Instagram.  We had so much fun working together and the crew was wonderful. So getting out of Dodge for a minute felt really good, plus it was a sweet script, I got to work with some cool kids and have a glitter fight!  It was a good time.” 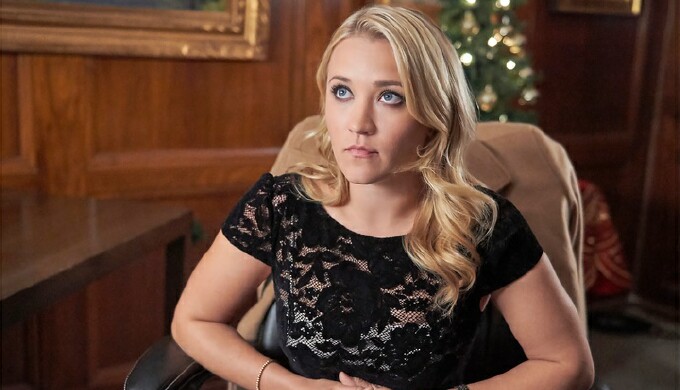 In Christmas Wonderland, Osment stars as Heidi Nelson, an artist living in New York with dreams of painting.  While her art dealer job places her firmly in the art world, her hometown of Pleasant Valley, Pennsylvania is never too far from her heart.  Nor is Chris Shepherd (Rottman), the high school sweetheart she left behind.  When her sister suddenly has to leave town, Heidi jumps at the chance to chaperone her niece and nephew, Katie and Tom, and heads home.  While there, she is enlisted to help plan their school’s Christmas Snowball dance, chaired by none other than Chris, who’s now a teacher.  As the couple attempts to resolve past issues, Heidi finds herself torn between her new life in the Big Apple and the one she left behind.

"I think Pleasant Valley holds a special place in her heart and she remembers being there as a utopian time in her life," Osment said of the character.  "All she wanted out of life was there; she was going to become an artist, marry Chris and then she left it all.  Going back I think she realizes this is who she wanted to be and should be, so it's easy for her to fit back into life there.  It’s where she belongs."

Osment found it easy to fit into the character, given they both share a love of attention to detail.  "I am a little OCD about that," she laughed.  "Not necessarily about neatness, but I recently had my kitchen remodeled and some of the knobs aren't level.  It drives me out of my mind!  Every day I'm like, ‘Argggh!  The knobs again!’  And [like Heidi] all the pictures in my home are incredibly level."

The film also provided Osment with the rare opportunity to play an older character and be an executive producer, both big draws to doing the movie.  "I liked that [Heidi] is older,” she said.  “It was fun to play.  I look young and tend to get cast playing young.  And if someone had told me at 16 that I'd be executive producing at 26 I would have probably said, 'yeah,'" she added with a laugh.  "Not many people on set knew I was.  I'd have strong opinions and people would ask, ‘Who is this girl?’  I'd explain that I am involved in this, take off one cap and put the other cap on.  When Sean Olson, the director, realized this, he said, ‘Oh, you can fire me?  I said, ‘I can, but I won't,’ as he was a fantastic director.  I liked that [EP] hat a lot.  It fits well.  I have an opinion on everything anyway, so it felt good to have someone listen.”

When it comes to Hannah Montana, Osment is surprised by the passage of time.  "It was like 14 years ago!” she recalled.  “We were in a vacuum shooting the show and there wasn't a lot of social media then.  It was only after a couple of seasons we realized it was a big deal.  I look back and I had such gusto and was so brazen, never really caring what anyone thought.  I forget how freeing that is.  It was a fun time though and I learned so much."

Osment is thrilled Christmas Wonderland provides a preview of the new music she’s working on with her band Bluebird.  “It's been about 10 years since I've done music and wanted to re-open that door,” she said with a smile.  “Having my song ‘Honey Heartbreaker’ in it was important to me as it’s very different.”

She’s looking forward to a continued association with Hallmark and it’s loyal following, but don’t expect an on-screen pairing with her older brother Haley Joel to happen anytime soon.  “We haven't worked together, and we talk about it occasionally,” she laughed.  “I want him to write something, as he's a fantastic writer, but I don't think we could do a Hallmark movie together.  We juggle being brother and sister in real life, barely, and we are a lot to handle.  So, shooting a movie together we might kill each other.”

Christmas Wonderlandwill be telecast Saturday, December 1 at 9 p.m. on Hallmark Movies & Mysteries as part its Miracles of Christmas programming event.