Fox at TCA: Charlie Collier, an Unmasked Singer and Another Surprise 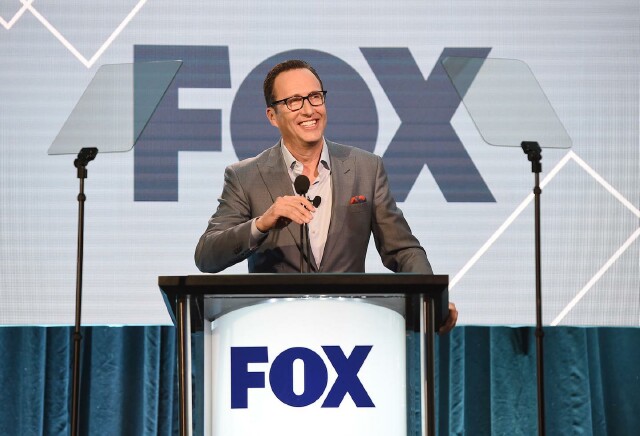 Not to be outdone by Jimmy Kimmel’s unexpected appearance during ABC’s executive session, Fox opened Charlie Collier’s first press conference at a Television Critics Association tour since he became CEO of Fox Entertainment with two surprises.  In a nod to what is currently the most talked about new series of the year, after an announcer introduced Collier, out to the podium strolled a man wearing a hippo mask, flanked (as the performers on the show often are) by two men in black suits and sunglasses.

“It’s my first TCA at Fox, so I thought I’d mix it up a bit,” the hippo began.  “The Disney transaction is yet to close, but I feel like we’re already accomplishing so much at the new Fox.”

As he spoke, his voice altered to sound silly, critics assumed it was Collier.  That would have been clever enough.  Then his tone darkened.

“Christ on a crutch,” he grumbled, still sounding goofy.  “I’m not doing this.”  Then he barked at the men in black.  “Take it off!  Come on, take the mask off!”  The men did as they were ordered while The Who’s “Who Are You?” blasted through the sound system.

The hippo wasn’t Charlie Collier.  It was his good friend from his AMC days, Breaking Bad and Better Call Saul star Jonathan Banks.

“Charlie and I are good friends,” Banks said.  “Let this be a cautionary tale about what you would do for a friend.  I said I’d do anything for him, but this … please Jesus, this is ridiculous!  I came out to see you all at TCA, who have been so good to me and my shows over the years.  And now I’ve got to be serious, because I want to be serious, and to introduce my friend, the real new Fox Entertainment CEO, Charlie Collier.”

Collier then took the stage as Prince’s “Let’s Go Crazy” blasted through the sound system.

The song choice was deliberate.  “Being up here with Jonathan again, I’m reminded that, actually, there’s never been a crazier bet in my career than the one I shared with that wonderful man as the tough guy Mike Ehrmantraut on Breaking Bad,” he began.  “Believe me, on paper that greenlight, that little meth story, was nuts.  But if there’s one thing I’ve learned in this business, it’s that crazy is in the eye of the beholder.  Some said it was crazy three decades ago for Fox to launch a fourth broadcast network.  I’m sure many thought it looked crazy to greenlight a singing competition featuring celebrities disguised as a poodle, a rabbit, a pineapple and a hippo.  And on the business side, some would say it’s crazy in today’s environment to scale down when everyone else is scaling up.

“Just a few months ago I got calls from Lachlan and Rupert Murdoch asking me if I’d like to join a start-up company,” Collier continued.  “Naturally, I asked them, ‘What’s it called?’  And they replied, ‘Fox.’  They said, ‘We’re getting a really rare business opportunity.  We’re getting a new day one.’  They shared their goals about wanting to rethink yet again what it means to be a media company and what it means to be a broadcaster and, frankly, what it means to be Fox in 2019 and beyond.  Today I helm what we’ve renamed simply Fox Entertainment.  [It’s] an open canvas upon which we’ll create new ways to do business.  It’s a start-up company, albeit one with, roughly, $26 billion in valuation.  It’s a true privilege to join a company where ‘Why not?’ and ‘If you want to, sure, let’s try it’ are common refrains.

“As you know, we’ve been preparing for the close of the Disney deal, and we’ll emerge from that free and nimble enough to partner with the best and brightest content creators out there.  We’ve entered into relationships that largely were not possible before for Fox, co-productions across multiple studios, for instance, and relationships with talent and partners that are completely new to our business.  And while we’ll continue our truly valued partnership with 20th Century Fox TV, this season already you’ll start to see our slate fill with partners as diverse as Universal and Warner Bros., Sony and eOne, among others.”

The hot topics that the press was anxious to address did not include the Disney deal.  Instead, reporters jumped right into the appalling attack on Empire star Jussie Smollett, the improbable success of The Masked Singer and the awkward Rent experience.  The latter seemed to be of special interest.  Why weren’t there understudies?  Why not simulcast live musicals to all time zones?  Given the disappointing ratings, would this be the last live musical on Fox?

Collier, who embraces risks such as live television, couldn’t resist a humorous response.  “On Friday, right before the weekend of the telecast, I wrote handwritten notes to all of the incredible people who worked on the production, and I signed them all, ‘Break a leg,’” he said with a laugh.  “Sunday morning (after star Brennin Hunt broke his ankle near the end of the final run-through on Saturday night), I came in early and rewrote a lot of notes!

Getting back to The Masked Singer, it had been announced before Collier took the stage that the show was renewed for a second season, leaving some critics to wonder how another season could be filmed without anyone finding out who was participating in it.  “Part of the reason this first season has worked so well is that no one knew anything about it,” one of them asserted.  “It was filmed months ago, and you were able to do that under the cover of darkness.  How are you going to deal with the second season?  Is there any chance it could be live?”

“What is so remarkable about a show like The Masked Singer, or a hosting job like Nick Cannon is doing, is that it looks really easy when they do it well,” Collier replied.  “But the science behind it and the work that this team does to keep it fresh and relevant and to keep the secrecy going, these are all conversations we’re having in the offices.  [The team] has done a phenomenal job looking at what it is, what it can be, and how it can grow.”

Later in the day, Fox presented a panel for the show that began with a preview screening of the entire episode that would be telecast that night.  In other words, TCA members were the first to see that the Raven was singer, actress and talk show host Ricki Lake.  She joined judges Robin Thicke, Jenny McCarthy, Ken Jeong and Nicole Scherzinger, host Nick Cannon and executive producers Izzie Pick Ibarra and Craig Plestis to talk about the show.  At the Fox TCA party that evening, Tori Spelling was on hand to talk about her experience on it as disguised as the unicorn.

The Masked Singer is a fascinating, quirky phenomenon, typical of the many successes that Fox enjoyed long before Charlie Collier joined the network and are likely to continue throughout his time there.