"General Hospital" and KFC Bite the Boundaries of Ad Integration 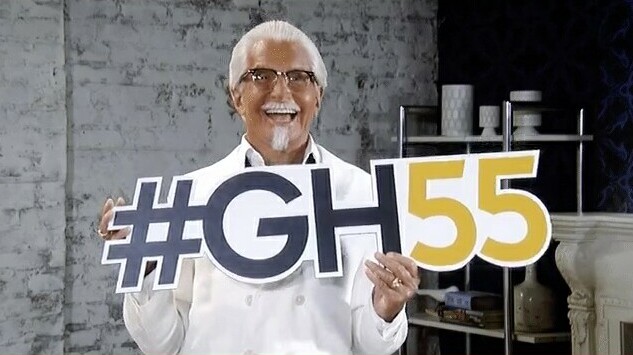 Ever since those balmy days in August, 1981 when Mikkos Cassadine attempted to freeze the city of Port Charles, located in upstate New York, with a “weather machine” located on a faraway tropical island, General Hospital has been known for its over-the-top storylines.  The city has since been infested with vampires, ghosts, mob families, mad scientists, spies of every stripe, evil geniuses capable of bringing the dead back to life … there was even a hunky alien named Casey searching for three all-powerful crystals from his home planet of Lumina.  I was good with all of that, but none of it prepared me for that visit last week by Colonel Sanders on a mission to protect the secret formula for his fried chicken batter.  It crossed some kind of line in a product placement stunt that I would not have believed had I not seen it myself.

Colonel Harland David Sanders is, of course, the iconic founder and face of Kentucky Fried Chicken, now known as KFC.  He sold the company long before he passed in 1980 (the exact time when Luke and Laura began the first of their many adventures, leading to the “weather machine” story and forever changing all of daytime drama), but his likeness has remained firmly in place since that time.  The Colonel has been played by different actors in KFC commercials in recent years, including Darrell Hammond, Norm MacDonald, Rob Riggle and even Reba McEntire, and perhaps most famously by the famously tanned George Hamilton, who popped in the Colonel’s bright white suit.

Hamilton reprised the role last Friday on General Hospital, where viewers who have been watching even longer than I have learned that he is an old friend of Maxie Jones, the daughter of ‘80s supercouple Frisco and Felicia, born in 1990.  Maxie’s long-absent father is now running the World Security Bureau, so I guess it made sense for the desperate Colonel to ask her to safeguard his billion-dollar formula.  Maxie’s friend Lulu Spencer (daughter of Luke and Laura), a hard-working journalist, was also on hand to meet the Colonel.  She wanted to tell his story but he insisted their meeting be off the record.

Apparently, Friday was National Fried Chicken Day, or so Twitter told me, so the KFC tie-in made sense.  And as awkward as it was, I have to say that ABC and KFC did a bang-up job promoting this stunt.  ABC ran a teaser video throughout the week with Kirsten Storms and Emme Rylan, the actresses who play Maxie and Lulu, respectively, excitedly calling attention to the big surprise coming on Friday’s show.  The social team at GH followed up on Instagram with a video that included Hamilton holding the very familiar GH55 hashtag celebrating the show's 55th year (pictured at top) and with some terrific tweets: 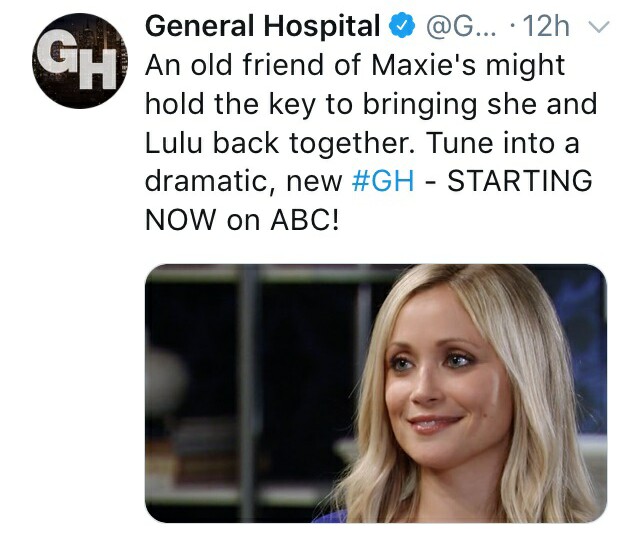 And they have kept it going days after the fact: 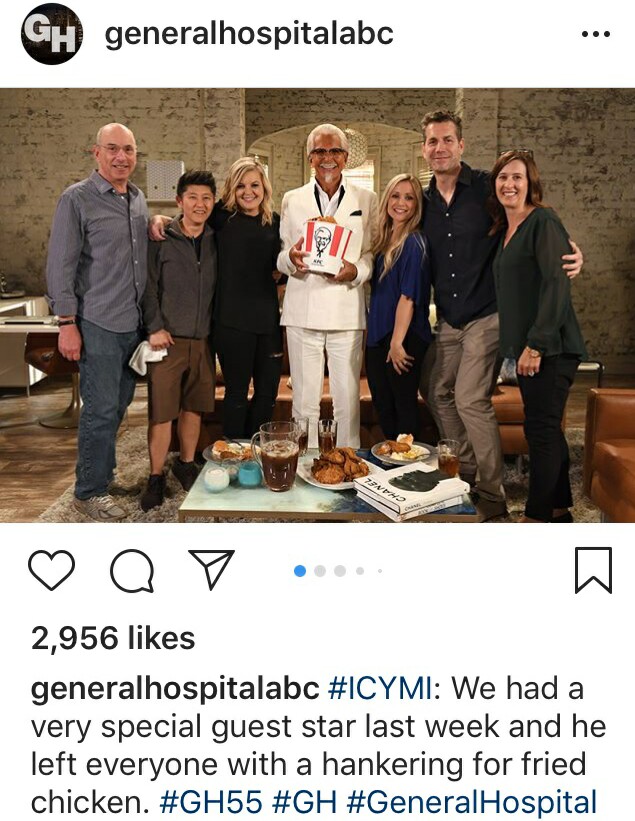 GH cast members got in on the act: 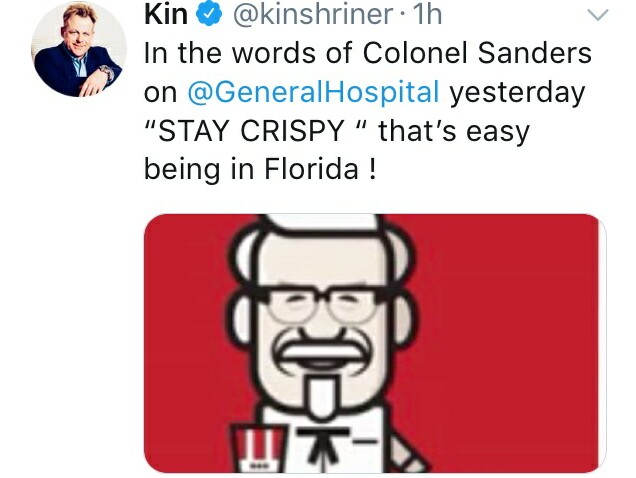 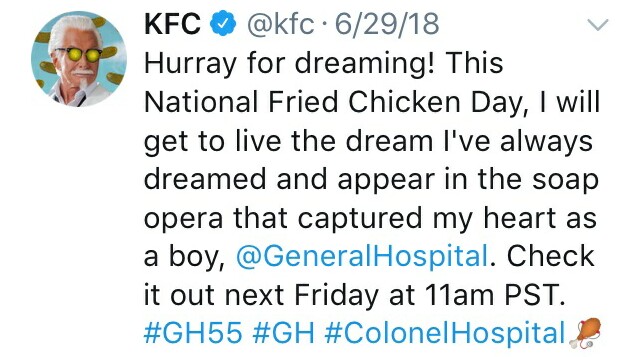 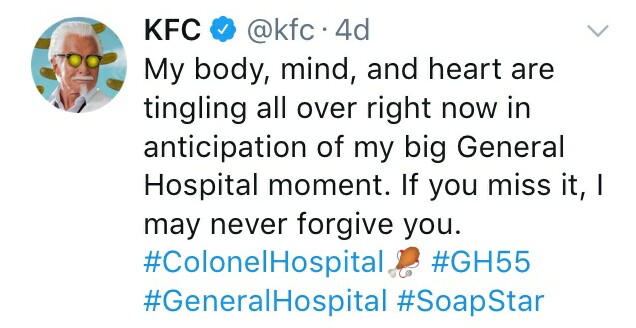 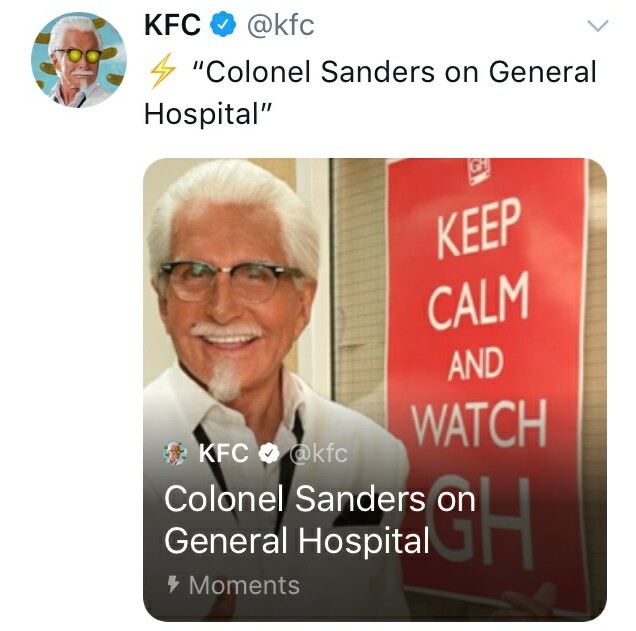 Why did the Colonel's appearance on GH bother me?  Well, aside from the fact that there was nothing particularly entertaining about it, and that it blended into the other storylines currently boiling away on GH like chalk might blend with cheese, I think my overall response to it was, what’s next?  Ronald McDonald selling burgers at Kelly’s Diner (where many townspeople sought shelter during the legendary August 1981 blizzard).

This was not the first time GH pushed the boundaries of advertiser integrations.  I’m generally pretty tolerant of such stuff.  Even though it was somewhat ghoulish, I didn’t mind years ago when Nurse Elizabeth Webber, whose little boy Jake had been killed by a hit-and-run driver, happily reminded her oldest son Cameron how much his late brother loved Hershey’s chocolate syrup and proceeded to pop open a bottle and make chocolate milk.  (Jake, incidentally, didn’t really die.  Years later we learned that he had been brought back from the brink of death by scientists working for Mikkos Cassadine’s insane widow Helena.)

More recently, Dr. Kim Nero (Tamara Braun) and Olivia Falconeri Quartermaine (Lisa LoCicero) had a backstage chat at the annual General Hospital Nurses Ball (a fundraiser to fight HIV and AIDS) to chat about skin care in general and Olay’s Regenerist line in particular.  (Both actresses have beautiful skin.)

I suspect KFC benefitted from all of this, given the magnitude of the exposure it received from the addition of the Colonel to the GH canvas, all tied to fried chicken’s very special day.  As a long-time fan and supporter of the genre I’m happy to see major advertisers execute campaigns in or around any daytime drama, but I’m not sure I wanted to see this.  Like KFC itself, a little bit of advertiser integration goes an awfully long way.