Jen Lilley on Her New Hallmark Channel Movie "Yes, I Do" 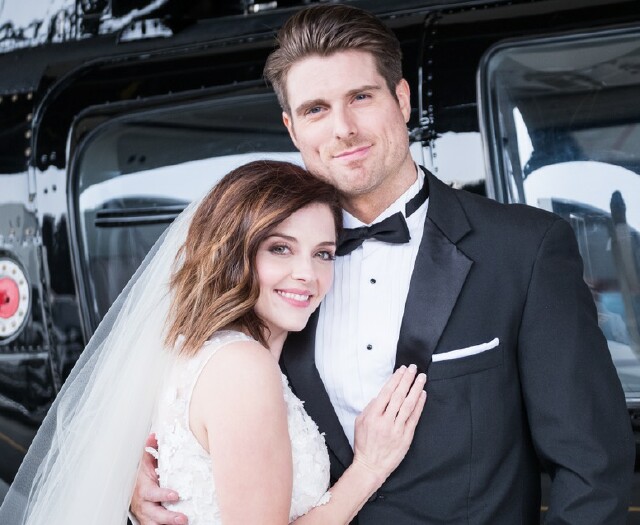 Hallmark Channel’s June Weddingsevent comes to a close this weekend with the premiere of the original movie Yes, I Do starring Jen Lilley.  For the actress, having the film be the jewel in the tiara of June Weddings is something she’ll happily "take," and she hopes the telecast will add to the success Hallmark has had with this hugely popular programming strategy – one that began five weekends ago with the ratings hit Marrying Mr. Darcy starring her Harvest Love co-star Ryan Peavey.  "It's really amazing and humbling, to be honest," Lilley said of the movie’s time slot during an exclusive interview with MediaVillage.  "I've always loved Hallmark Channel and am honored to work for them.  I love what they stand for, my family loves it, and my in-laws love it, so I always win a lot of points with them.  I'm really excited to be a part of June Weddings because it's kind of the hilt of Hallmark, besides Christmas."

In the film, Lilley stars as chocolatier and bride to be Charlotte Bennett, whom after leaving her helicopter mechanic fiancé James (Marcus Rosner) twice at the altar (by virtue of what can only be a deserving sainthood on his part) finds herself in the throws of planning a third attempt to say "I do" with him.  All's well until Charlotte's innate fear of weddings begins to manifest once again.  Heeding the warning signs, James takes matters into his own hands and calls things off -- leaving Charlotte, desperate to keep the man she loves, to plan James' dream wedding in an attempt to lure him back.  (Lilley and Rosner are pictured at top and below.)

"He deserves a medal or at least the best husband award before a ring has even been put on it!" joked Lilley of her on-screen fiancé.  "He is perfect marriage material and [apparently] in it for the long haul.  But I did get to have three weddings -- which was special for a Hallmark movie." 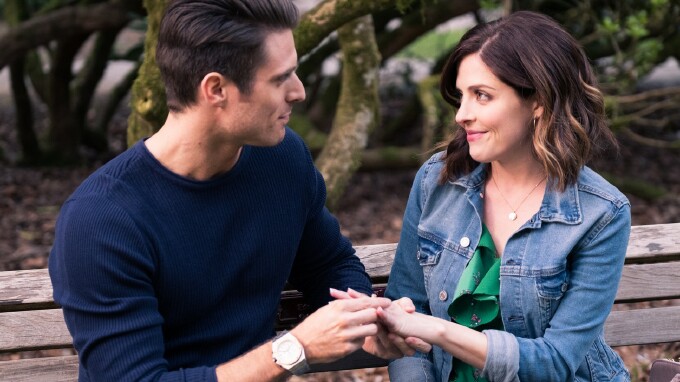 Planning a wedding isn’t Charlotte’s only challenge.  With her chocolate empire on the verge of exploding, a pending visit by Nicole Sweeney (deliciously played by Jessica Lowndes) -- owner of Chocolate Monthly Magazine, who wants to feature her creations in the publication -- only adds to the stress.  And when Charlotte uncovers a secret history between her betrothed and the scheming Nicole, stress levels boil.

For Lilley, accepting the role of Charlotte, a woman she refers to as "trepidatious and unknowingly awesome," gave her trepidation, as well.  Despite being written with her in mind (by executive producer Michael Vickerman), the challenge of playing a character that could be construed as a selfish heartbreaker made her nervous.  "I was freaking out when I first read it," she revealed.  "Michael and I had worked together before and really got along as he's a really nice guy.  He told me he wrote the character for me and said he knew how I talked and how quirky I am.  But initially I had the reaction of 'how do you make her the hero of this movie?'

"Julia Roberts did it in Runaway Bride, so it can be done,” she continued.  "But she wasn't trying to marry the same guy three times.  Initially, I thought it an uphill battle.  I really had to tap into myself.  I had to find a reasonable reason for her actions and it's highlighted in the movie -- she overthinks everything.  So it was tricky, but it all came back to Michael having me in mind and knowing I could pull it off."

Thanks to Lilley's affable and quirky demeanor she does indeed succeed.  “I get made fun of for laughing at myself in the comedies I do as I forget it's me!"  she laughed. "What I liked about the way [Charlotte] was played were the physical quirks, like her nervous energy, which was my favorite thing about her.  I do credit a lot of that to [director] Christie Will Wolf.  It's my fourth movie with her and we laugh all the time.  The only note we had on the movie was ‘don't get too silly.’

"Not all of the physical humor was scripted," she added.  "It’s something the crew knows I'll bring.  Shooting things with Christie we do four to five different takes of a scene and the last one is usually the silliest, so there are always choices.  I was pleased a lot of those made the cut this time and it all worked out."

In addition to her Hallmark commitments, Lilley is excited about the fall release of a passion project – an album.  “It was a two-year project I did between acting gigs,” she said.  “It's kind of modern ‘60s style music.  I got to work with some amazing people including Adele's 50-piece orchestra.” Also, the very busy Lilley recently resumed the role of Theresa Donovan on Days of Our Lives and she is hoping that her fifth Hallmark project, based on a script she discovered, will soon start production.  “[Crown Media Family Networks President and CEO] Bill Abbott announced in January at TCA that I was doing a Hallmark Christmas film,” she said.  “I've been in talks with producers and writers.  Nothing's been set in stone yet, but hopefully soon.”

Yes, I Do will be telecast Saturday, June 30 at 9 p.m. on Hallmark Channel as part of its June Weddings event.