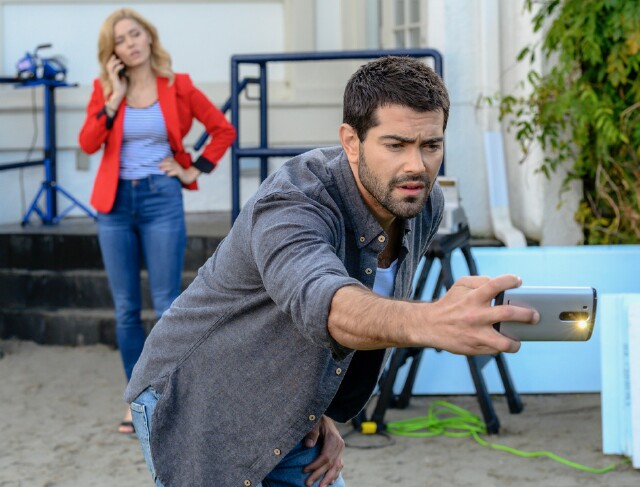 Ten years ago, actor Jesse Metcalfe made one of the best decisions of his career, accepting the lead in the Hallmark Channel movie Fairfield Road.  The move to Hallmark proved successful and afforded him the opportunity to appear in four more films for the network, which eventually led to a starring role on the hit series Chesapeake Shores for the last four years.  For his latest project, A Beautiful Place to Die: A Martha’s Vineyard Mystery, the popular Hallmark fixture is switching gears, and channels (to Hallmark Movies & Mysteries), playing retired Boston police officer Jeff Jackson, whose dream of a quiet life fishing is derailed after he discovers the body of a mysterious visitor to the island floating in its waters.  The chance to sink his teeth into a gritty mystery/drama, become an executive producer for the network and explore a character he felt an affinity for, were all things Metcalfe said were too good to pass up.

“I returned to Hallmark after Fairfield Road  to do A Country Wedding [in 2015],” he explained during an exclusive interview with MediaVillage.  “A Country Wedding proved quite a creative endeavor and required a lot of preparation.  Often these projects happen very quickly, but with that one, I had to learn three original songs, along with the script, and I also got really sick just before we started filming.  So, it was definitely a challenge preparing for that movie.  But I think I managed it, and we made something that had a lot of heart and people really responded to.  I think that's what ultimately led to the very fruitful partnership I'm having with Hallmark Channel.”

That partnership has allowed Metcalf to blossom into the role of executive producer.  It’s something he told me proved advantageous regarding the Martha’s Vineyard Mysteries, which are tonally a departure to other franchises currently on the network.  “This was my first opportunity to be an executive producer at Hallmark and I am incredibly grateful to them for trusting me enough and allowing me to take on the role, and for being an incredible creative partner over the years,” he said.  “As an executive producer, I weighed in on every aspect of the production.  I wanted a grittier feel.  The mystery had to be smart.  I wanted this character to be a lot more layered and very irreverent.  I took those cues from the novels (by Philip R. Craig) from which the scripts were adapted. The novels are even more irreverent, fun and edgy, so we wanted to bring as much of that as possible to the movie.”

A part of that “overseeing” role saw the actor have an active hand in casting and deciding on the perfect co-star.  "The character of Dr. Zee Madieras (the acting medical examiner on the case, with whom Jackson shares a past connection), played by Sarah Lind (pictured at top with Metcalfe), was particularly challenging to cast,” he admitted.  “We looked at close to a dozen actors for the role, but I really liked Sarah's tape.  I thought she really managed to sell the intelligence and sophistication of being a doctor, but at the same time had this dry wit -- and that is Sarah Lind.

“She was perfect for the role,” he continued.  “I also liked the fact she had never been on Hallmark before.  Bringing an actor of her caliber to the network is a win for Hallmark and our [movie].”

According to Metcalfe, the character of Jeff Jackson, a name which itself invokes thoughts of a “super-cop,” was a delight to play.  “I try to bring as much character as I possibly can to everything I do,” he shared.  “This is a great role that any guy would have a lot of fun playing.  It's a little Magnum P.I., and the fact that this character had been discharged from the force after taking a bullet in the line of duty gives us this B-storyline that explores his past and unfolds throughout the series.  There is a lot to draw from and that makes him really fun to play.

“The thing I related to most with Jackson is he uses his charm and humor to fight having to talk about his feelings,” he continued.  “He’s sarcastic; very dry at times and often very irreverent in the face of danger.  It all makes it very interesting and leaves you wondering what he sees in his life and career as a detective that made him the way he is?”

Needless to say, Jackson is a character Metcalf would like to inhabit for a while.  "We have intentions to make at least eight of these movies, and who knows, maybe more if they're successful,” he teased.  “There's a very fine line at Hallmark between a ‘series’ and a ‘series of films.’  Regardless, it's cool to follow what you have established in the previous film and have this continuing B-story about Jeff's past unfolding throughout each one.  It pieces them together nicely.”

While Metcalf awaits the news of the go-ahead for a fifth season of Chesapeake Shores, he has two more projects in the works:  A movie he executive produced and starred in called Cover Me (that just sold and is currently on the festival circuit) and Steps (currently in pre-production) that he is also executive producing.  “I'm also supposed to be doing an action film opposite Bruce Willis called Open Source at the end of the month,” he casually mentioned in closing.  “I have my fingers crossed for Chesapeake!  We are hearing good things, but nothing is official yet.  Anything I do outside of working with Hallmark is only a good thing, and [I do have] a lot going on with them.”

A Beautiful Place to Die: A Martha’s Vineyard Mysterywill be telecast Sunday, January 12 at 8 p.m. on Hallmark Movies & Mysteries.