Luke Macfarlane on Breaking the Rules in His New Hallmark Movie 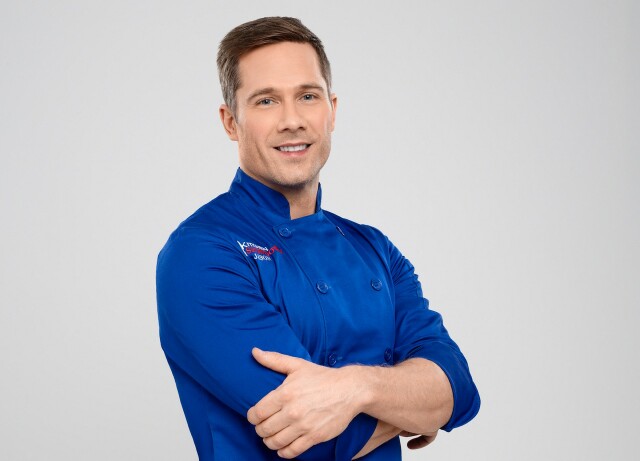 For Just Add Romance, his latest movie for Hallmark Channel, handsome network regular Luke Macfarlane revisited some familiar acting territory by playing a chef.  The last time Macfarlane found himself in a chef’s jacket was during his in five-year run as Scott Wandell on ABC’s Brothers & Sisters.  However, while he knows his way around an on-screen kitchen, cooking is not exactly his forte.  "I'm not a chef, I'm really not," laughed Macfarlane during a recent exclusive interview with MediaVillage.  "I'm a woodworker and I did build my kitchen, literally, from the cabinets to the countertops and all the plumbing.  It's just that I can't do anything with the thing that I built.

"However, this [role] was comfortable because I played a chef before on TV," he continued.  "We were lucky on this project because our cinematographer had worked in kitchens for a really long time, so he had these very specific things that people who work in kitchens would know about, like the countertops are super slippery and whenever you're chopping something on a plastic chopping board, just put a slightly damp rag underneath and it won't slip.  That was a cool little trick -- and that's my No. 1 tip -- from a guy who's only cooked on television."

In Just Add Romance, Macfarlane stars as would-be chef Jason, who after meeting Carly (Meghann Fahy, pictured below opposite Macfarlane) in culinary school realizes their chemistry, competitiveness and playful banter could lead to something more.  That is, until Jason mysteriously disappears from school.  Fast-forward three years and the two are reunited as contestants on the set of Kitchen Showdown, a cooking competition show on which the winner is awarded an actual restaurant.  As Carly and Jason power through their challenges, the cameras are catching every moment of their burgeoning romance.  But with both having their eye on the prize, their romance could end up on the chopping block in favor of their individual careers. 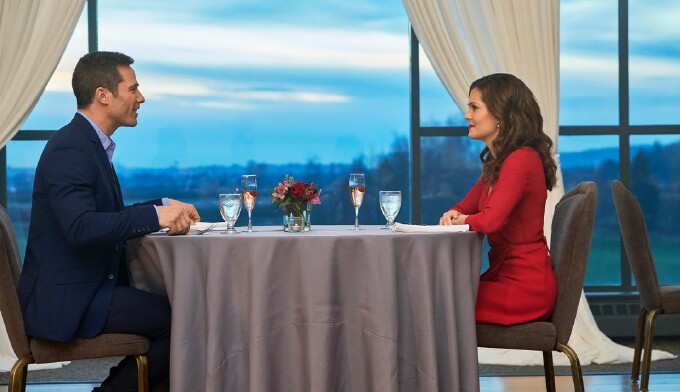 "I liked this script immediately and thought that the show within a show was a great twist on the movie and does a lot of interesting things," explained Macfarlane.  "We also break the mold a bit as we know early on that these two will get together, but then what happens?  It’s a little different to most of the movies where you spend a lot of time wondering if they'll get together.  I thought that was unique.

"We also broke one of the [Hallmark movie] rules because we kissed in Act II or Act III," he added.  "Usually you don't get to kiss until the end.  Maybe I'm giving away the secret sauce, as there's usually a really big build up.  I think in these movies that run in between programming seasons for Hallmark, in that they are  not Christmas movies or Valentines movies, there's a little more freedom in their structure, and that also appealed to me."

Like his character, who’s constantly prodded by Carly to go off-recipe and try new things, Macfarlane admits to being a rule follower.  “In many ways, I am a traditionalist,” he told me.  “I've always been attracted to following the rules; I think what my character Jason tries to convey is there is great comfort in following the rules while the rest of the world is so chaotic -- but like anything, it's okay [to not do so] if it's done in moderation."

One thing he had to do in moderation during production was eat.  Despite the temptation of the array of fine foods that covered the sets, his costume just didn't allow for it.  "The food was actually real," he revealed.  "Our food stylist did an amazing job and as I'd expressed an interest in directing one day, I was lucky enough to sit in on a lot of the early preparation meetings.  They went to town on the food and every single piece was edible!  But because they had to pour me into that chef's uniform, I stayed clear.

"Actually there was much discussion about the tightness of my chef's jacket," he added with a laugh.  "It actually became a point of contention because I was like, ‘I think it's a little tight?’  They told me that was all they had so I had to be like, ‘okay.’  But it did bring up a slew of interesting problems, including rolling my sleeves up as it looked like my arms were bulging out of it.  The other thing was because it was so tight the microphone I was wearing would kind of rub on it.  So I hope it looks good because it was a struggle to work with."

Before fans start worrying that Macfarlane’s move behind the camera may take him off screen, don’t worry, there’s no hurry.  Thanks to Hallmark he has the perfect training ground.  "I'm taking all the opportunities I have to learn as much as I can," he explained.  "Hallmark is a great place to learn because they are so good to you.  For a lot of the actors, you kind of get used to not being treated so well, so moving into a company where everyone is receptive is incredibly nice. It's really a lesson to any company in that if you treat your employees well, they will treat you well.

"I'm looking forward to working with Hallmark again," he offered in closing.  "So if they knock on my door, I'm inviting them in for tea or coffee and a biscuit, which I will not have baked because I can't do that."