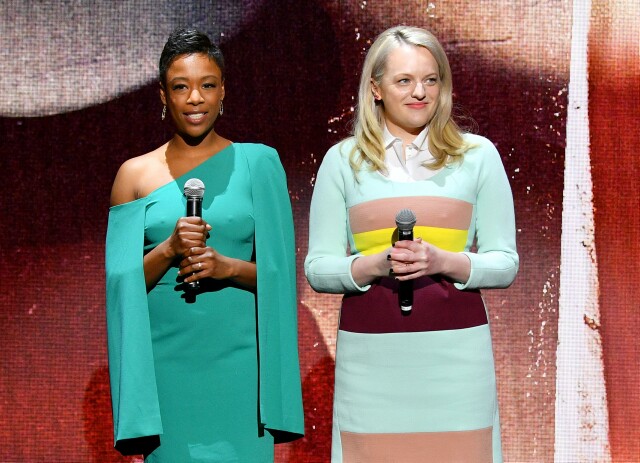 Of all the Digital Content NewFront participants last week, Hulu arguably came in with the most momentum generated by a single series: The Handmaid's Tale.  The acclaimed rendition of Margaret Atwood's dystopian novel had an outstanding trifecta to start this month: raves for its just-launched second season; a Peabody Award (which will be celebrated in public May 19) and, hours before Hulu opened its showcase, the go-ahead for a third season.

Venue:  The Hulu Theater at Madison Square Garden, renamed several months ago thanks to a rights agreement struck with MSG.  Factoids on the venture's audience makeup and habits were flashed on the main lobby videowall, alternating with the "It's All On Hulu" motto.  More than a few factoids centered on local results.  Example: "Staten Island is the most engaged New York borough, spending more Hulu time than the average New York viewer."  All the while, waiters were serving coffee or other breakfast items.  Grade: 4 Jacks

Presentation:  While Handmaid's was acknowledged in remarks by Hulu executives (and by a stunning sequence midway through; more on that below), the focus went deeper than that.  "The future of TV is right now," declared Chief Executive Randy Freer.  "We're a complete TV experience and leading the industry into the future."  That future incorporates original series, classic movies and TV, a skinny bundle of channels and interactive elements, including (via a new interface feature) the ability to notify Hulu of what you don't want to watch.  As for originals, Hulu's content is presented with less than half the advertising load of broadcast and cable channels in primetime.  "We're committed to creating talked-about TV," added Chief Content Officer Joel Stillerman.  Grade: 4 Jacks 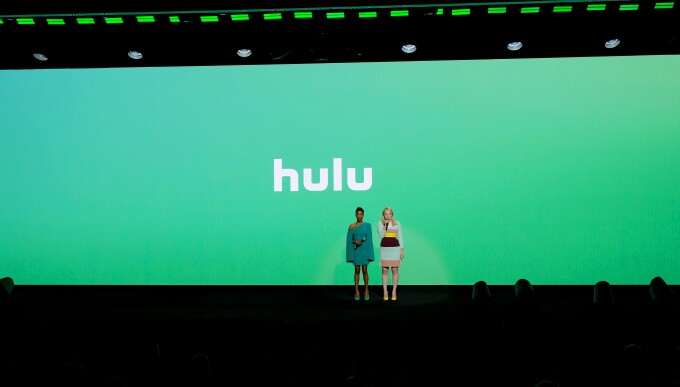 News:  Into the Dark, an unusual experiment in both format and scheduling from Blumhouse TV, will begin October 5.  Twelve horror-themed episodes will be filmed, with one playing the first Friday of each month through fall 2019, inspired by a holiday.  Mindy Kaling will write and co-executive produce a limited series version of the hit film Four Weddings and a Funeral, handled in semi-anthology fashion.  Comedian Ramy Youssef with partner with Jerrod Carmichael (The Carmichael Show) on Ramy, playing an American Muslim living in New Jersey.  DreamWorks Animation, which had been producing a number of originals exclusive to Netflix, will move that initiative to Hulu next year.  Castle Rock, the Stephen King-triggered series announced last year, will debut July 25, while Mars-minded drama The First will launch this fall.  (Note: Series in development include Less Than Zero, Little Fires Everywhere, Invisible Man and Shrill.)  Separately, dynamic ad insertion will be launched for the skinny "Live TV" bundle by summer, where national advertisers can use the local breaks (two minutes per hour) allocated on selected networks.  Shortly after, another ad option will open up involving content Hulu users download on various devices.  Grade: 5 Jacks

Hosts:  Freer,Stillerman and their executive colleagues smoothly mixed their pitches with good humor.  Check out this commentary from Kelly Campbell, Hulu's Chief Marketing Officer:  "More than 35,000 people watched everyER episode on Hulu over the last two months.  You can't get too much George Clooney." Grade: 4 Jacks 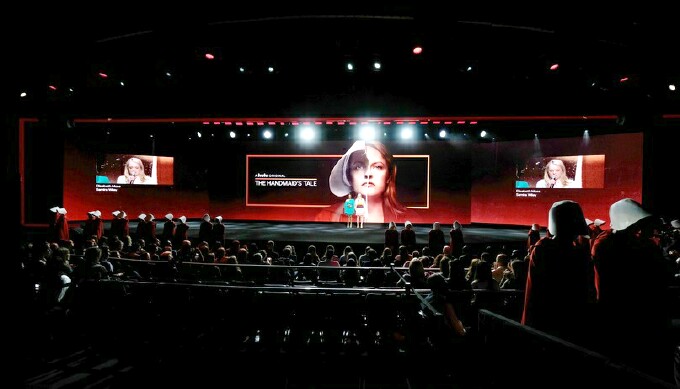 Star Time:   Handmaid's Tale co-stars Samira Wiley and Elisabeth Moss (pictured at top and above, left to right) acknowledged Hulu and the crowd for supporting their series, after a group of women dressed in the now-familiar red frocks and white bonnets walked on stage and stood in the aisles amid a groundswell of music.  Numerous attendees found the moment so stunning they let out loud gasps.  Kaling interrupted the end of the presentation to tout Four Weddings, reminding all present to "start thinking of those integration opportunities."  Youssef encouraged people to look for his new series because "we fully explore Islam in 22 minutes a week."  Also on hand: Sarah Silverman in person; Clooney on film (from the set of his Catch-22 miniseries).  Grade: 4 Jacks

Data Insight:  Among Hulu's 20 million subscribers, 78 percent watch via smart TV sets and/or TV-connected devices.  The majority of that crowd do their watching in the living room.  Half of Hulu users do not watch broadcast TV advertising. Grade: 3.5 Jacks

Innovative Opportunity:  Huluween, a multi-week festival of Halloween-oriented movies and TV episodes, with Into the Dark's opening stanza a key component.  Grade: 3 Jacks

Overall Grade:  4 Jacks   Well-paced effort that packed a lot of news developments and information nuggets along the way.  And what a simple, yet powerful way to honor a zeitgeist-setting effort like The Handmaid's Tale.