NewFront News and Views: Verizon Media Scores With 5G and "5B"

By Simon Applebaum May 09, 2019 Upfronts/NewFronts Archives 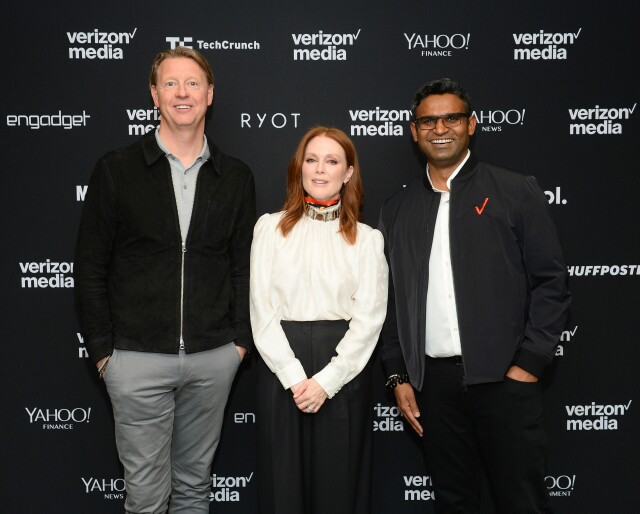 Verizon Media’s digital programming unit, formerly known as Oath, had its Digital Content NewFronts turn last Tuesday evening -- amid the recent start of parent Verizon’s rollout of 5G signal transmission capability for smartphones across the country.  Anyone attending with thoughts that Verizon would use this event to demonstrate early applications of 5G in content were not disappointed.

Venue:  300 Vesey St., a new building located in Battery Park City near the Hudson River.  Three floors up, the space was gigantic, dressed in black with a bar in back for pre- and post-show networking and appetizer noshing.  There were logos and pictures of Verizon’s content brands from HuffPost to Yahoo. Sports and TechCrunch flashed on the big screen in front; an impressive look in every way, and a perfect setting for concerts or keynote speeches.

Presentation:  As other NewFront players showcased new or expanded distribution of their programs through smart TV sets and TV-connected devices, Verizon Media management declared that mobile remains their key avenue to reach consumers with short-form, non-fiction video.  “We provide engaging experiences for our consumers,” said Chief Executive Officer, K. Guru Gowrappan.  “All in an environment built for fast surfing.”  With a 5G production facility operational in Los Angeles, Gowrappan and his management colleagues promised attendees more unique content will be available for advertiser participation in the months ahead. In quick fashion, brand after brand offered sneak peeks at their new series.

News:  Yahoo Play, a mobile-only collection of new games, mini-games and quiz shows aimed at adults 18-24, will debut later this year.  One series will be hosted by an animated animal character in real-time from Los Angeles, using advanced motion-capture techniques incorporating 5G.  Up to 20 series and apps will premiere during 2019 with ten more programs in development.  HuffPost’s upcoming content includes a series of reports on Miami’s coastline crisis due to beach erosion.  A fantasy football app will be incorporated into Yahoo! Sports’ coverage of National Football League games this fall.

Host:  Gowrappan kept an insightful yet engaging tone throughout his commentary.  Near the end, Verizon Chief Executive Officer Hans Vestberg invited the crowd to take away one message: “If you’re not excited about anything else, you should be excited about 5G.  What’s important for us is the innovation and trends.  We need to manage our society and our role in it.” 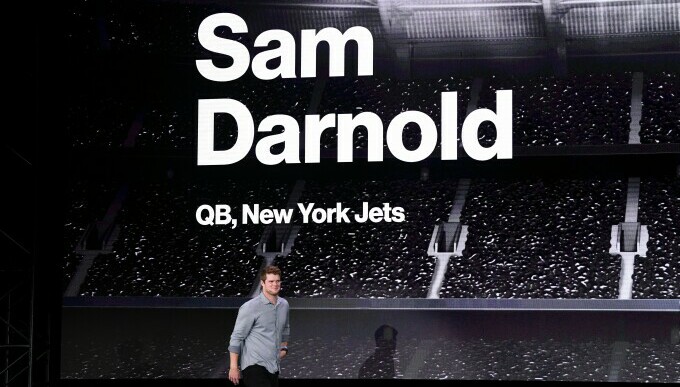 Star Time: Second-year New York Jets quarterback Sam Darnold co-announced the fantasy football app.  At one point, he invited Gowrappan to catch a pass.  No go, but give Darnold credit  for trying.  In one of the more moving touchpoints of any 2019 NewFront, Academy Award-winning actress Julianne Moore introduced5B (a documentary about the first hospital ward set up to care for AIDS and HIV patients), then had four of the ward employees profiled in the film (out this summer) come on stage to a standing ovation.  (Moore is pictured at top with Vestberg, left, and Gowrappan.)

Innovative Opportunities:  Multi-brand sponsorships, including community outreach and social media campaigns associated with 5B and other long-form content projects ahead.

Cuisine:  Off-the-chart range of appetizers.  Best eats: sliced tuna on a bed of rice, broccoli tempura on mini-buns, buffalo chicken bites with a cucumber slice placed in the middle, and diced spaghetti with a small meatball on top.  No bad eats on the premises.