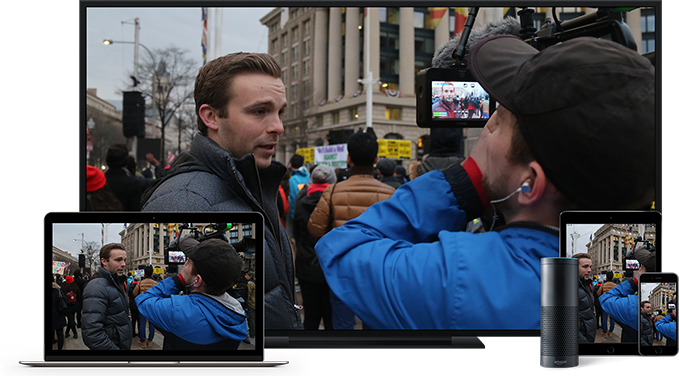 Newsy's road to becoming one of the most watched OTT news apps was a long one, but thanks to Head of Strategic Partnerships Stephen Strong and his team the company continues to expand and meet consumers everywhere they consume news.  Newsy is leveraging its now strong brand position in OTT news to build popularity in linear cable, where most Americans still get their TV news.  With new video services seemingly launching every few months in the news and information space, Strong shared some of the secret sauce on how they work to keep Newsy ahead of the pack via a unique content and distribution strategy.

Michael Smith:  How is Newsy dealing with growing competition in the OTT news space, especially from bigger players like CBS, NBC and Fox?

Stephen Strong:  We were one of the first news companies, regardless of size, to see the value of the OTT space.  We launched on Roku more than three and a half years ago before most of the other major news players were there.  As a first mover, we've built a solid audience that keeps coming back.  I think our nonpartisan messaging -- not taking a side left or right -- really sticking to news with the why and trying to educate, inform and allow people to make their own decisions has definitely resonated with our audience.

Smith:  Why do you think you've been so successful in getting on so many different distribution platforms?

Strong:  The acquisition of carriage contracts from RLTV in 2017 was certainly a catalyst, and a strong relationship with our partners across the entire E.W. Scripps enterprise helped open doors.  After that, I think to some extent it has been a domino effect.  The first few cable distribution deals were challenging because we were unknown.  But with our linear channel, we're helping cable operators reach younger news consumers who have generally given up on watching cable news due to the inclusion of too much opinion and a presentation format that doesn't make sense.  These viewers are hungry for balanced news and quality information and they're underserved by the current cable news networks.  Our content resonates; we have people spending a lot of time with us and they come back.  That has made the last few deals a little bit easier.

Smith:  How do you balance and prioritize distribution between vMVPDs, your own OTT apps and traditional cable TV?

Strong:  That's a big challenge and opportunity.  A few years ago, it was all about "How do I bring people to my app?"  Now our distribution strategy is rooted in getting content on destinations where people are already consuming content.  We really value our linear partnerships, as well as those with our OTT partners.  Every viewer, across all our outlets, is important.  We work hard to leverage cross-platform data to inform our marketing and content decisions.

Smith:  What do you see for the future of ad-supported OTT video?

Strong:  While a lot of people subscribe to Netflix and other subscription services because there's a limit to what they will spend overall, I think free, ad-supported services will continue to be popular.  The growth of free, ad-supported services has been incredible and has certainly worked well for us.  When you go into some of the SVOD apps, you can spend 15-20 minutes trying to find something to watch.  I call it discovery fatigue.  But most of our users jump into our experience to get into their news right away.

Smith:  What is Newsy's key selling point to distribution partners?

Strong:  You have some traditional news brands that are on the left and some that are on the right.  Given the current state of politics, the gap between both sides is only widening, leaving a space for advertisers who want to spend on news but don't have a brand-safe environment in which to do so.  Newsy fills a growing lane down the middle.  Have you watched traditional cable news in primetime?  You have 12 boxes on the screen, 12 people screaming at each other -- after an hour of watching, you leave with a headache.  That's not appealing for the viewer or the advertiser.    Watch Newsy for an hour and you know what you need to better understand your world, all delivered in a fact-based way, without opinions.  This message resonates well with distribution partners.

Smith:  Do you see distribution opportunities beyond people watching OTT at home?

Strong:  Yes.  We're excited about several deals we've done in the past six months in the out-of-home space.  We did deals with Captivate, which is on elevator screens, and Reach TV, which is in airports.  We're also exploring the audio space.  A lot of our content works well in audio.  We've done a lot of work with Amazon in creating long-form experiences on Alexa.  These will all be big priorities for us over the next two years.

Michael Smith advises startup and established companies in the TV/OTT, digital media, video content, and technology sectors.  For the past 20 years, Michael has established a career focused on building the “What’s Next” in the lifestyl…