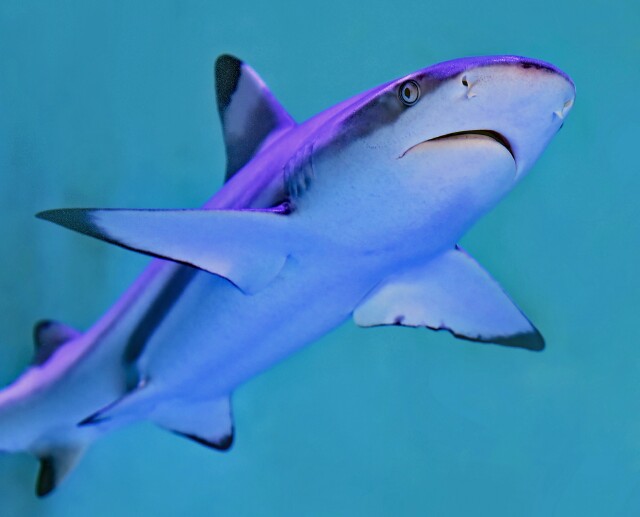 Paul de Gelder exudes the calculating efficiency of a Bond villain.  Perhaps it’s his icy blue eyes, shaved dome or muscled frame.  More likely, though, it’s his collection of high-tech prosthetics replacing his right hand and leg below the knee.  The bionics, combined with the cockiness of a street fighter and military bearing, make for one tough man.  Oh, and there is that time he swam for his life through a widening pool of his own blood after a bull shark attack.  In addition to losing limbs, the attack left him a committed environmentalist and a standard-bearer for Discovery Channel’s “Shark Week.”

The films offer breathtaking shots of all varieties of sharks.  As these predators glide through the water, fatal fangs at the ready, they do not appear to need the help of anything quite as edible as humans -- certainly not from one who has already been mauled.  It’s fair to say that most people mangled by a shark would not fight to preserve them.  De Gelder, however, is not like most people.  Growing up swimming in the South Pacific, he had a healthy disdain of sharks, which has been mischaracterized as hatred.  “I just didn’t want them anywhere near me,” he explained during a recent interview with MediaVillage.  “I just thought if they were gone, I could swim safely.” 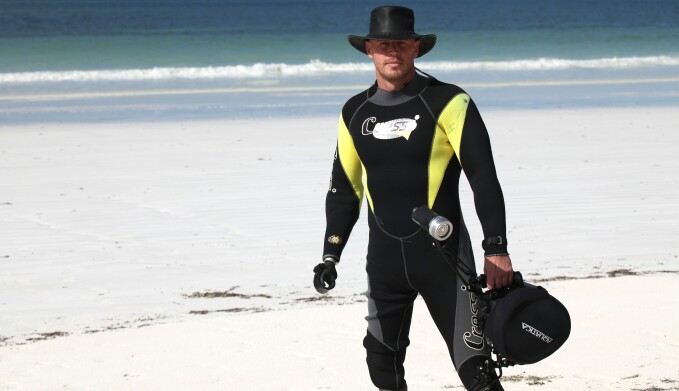 A rough and tumble kid from Canberra, de Gelder (pictured above) enlisted in the Royal Australian Army and became a paratrooper.  After five years he moved onto the Royal Australian Navy where he was a clearance diver.  “It was very complicated diving in murky water with bombs and explosives,” he matter-of-factly recalled.

On a chilly day in February 2009 de Gelder rolled off the boat backward, as clearance divers do, to conduct a counter-terrorism exercise.  A giant bull shark "came out of nowhere" and chomped down on his right side and dragged him under.  Unable to reach its eye -- the life-saving tactic for when sharks attack -- de Gelder punched its head.  Mentally he prepared to die.  The next thing he knew, de Gelder surfaced, free of the deadly jaws.  His team pulled him onto a dinghy; once at the pier paramedics sped him to the nearest hospital while trying to staunch his bleeding.

Those 10 seconds of fighting a shark and relying on pure survival instinct make de Gelder a powerful motivational speaker, which is what he does when not appearing on “Shark Week” specials.  This season he appears on three: Ronda Rousey Uncaged (Sunday, July 22), SharkWrecked (Thursday, July 26) and Bloodline: The Spawn of Jaws (Friday, July 27).  By the end of the week de Gelder will have notched nine Discovery specials; yet becoming a TV personality was never a goal.  Rather, he developed an on-camera presence because his attack was so well publicized.  His fateful dive was filmed because it was an exercise.  After, TV stations frequently asked him to comment on other shark attacks.  De Gelder realized this was an opportunity to learn and to educate others, and confront any justifiable, lingering fears head-on.  “Through necessity I had to find out what I was saying so I didn’t sound like a big numpty on television,” he said.

About three months after his attack de Gelder ventured into the water again.  He needed to swim, not necessarily with the sharks, but simply to experience the freedom and serenity of the ocean.  When Australia’s 60 Minutes asked him do a dive, he recalled that he “got to see these animals doing their thing in the ocean and not being terrifying man-eating monsters.  It gave me appreciation for their beauty and majesty.”

De Gelder would be forgiven if he didn’t view them as beautiful and majestic, yet he does -- and of more importance he sees sharks as vital to the ecosystem.  “The simplest way is to look at it as a game of Jenga,” de Gelder explained.  “The most important block is at the bottom, and sharks are at the bottom.  If you remove a bottom block, it becomes unbalanced in different areas.  Sharks prey on different species, and if you remove the sharks those different species will explode and start devouring more of the food they would normally eat, which [would] create an imbalance.”

While viewers learn about sharks, most would have to admit that they’re hooked because watching aquatic behemoths sink razor-sharp teeth into anything is mesmerizing.  The more fraught with danger the situation, the more engaged we become.  Not without surprise, de Gelder stars in what the network bills as the most dangerous stunt of “Shark Week.”  He and former British Special Forces James Glancy, a British conservationist, sail into the Atlantic, 25 miles from Cat Island.  Then they blow up their small boat.  What would be the challenge of being on a boat when one could be in the ocean teeming with sharks?

Was de Gelder, as most humans would be, terrified?  No!  He’s only afraid “when my girlfriend gets upset with me,” he confides.  “The funny thing about coming that close to death is you learn there is not that much to be afraid of.  Life is meant to be lived, meant to be experienced -- happiness, fear, anxiety.  We are designed to feel the whole [range] of human emotions, so why would you not want to feel them?“