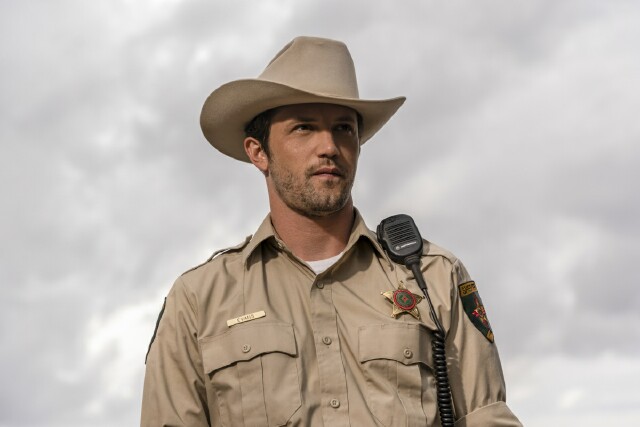 Pasadena, CA -- The worlds of sci-fi and fantasy have been kind to actor Nathan Dean Parsons, who currently stars as Deputy Sheriff Max Evans on The CW’s Roswell, New Mexico.  Over the course of his career, Parsons (pictured above) has played a gay vampire on True Blood, a werewolf on The Originals, Hansel (aka Jack/Nick Branson) on Once Upon a Time and now a humanized alien.  While those are just a few of his characters, Parsons is happy to be transported into a “genre world” whenever he can.  “I love the possibilities of [them],” he said with a smile when MediaVillage spoke exclusively with him at the Winter 2019 Television Critics Association tour.  (The TCA panel for RNM is pictured below.)  “I've always been too imaginative for my own good.  I was one of those kids that always played make-believe, and when I was no longer a kid, I still wanted to!  I've had wonderful opportunities to do that in so many capacities and explore that in so many universes.  To me, that’s what it's all about, world creating and creating relationships within a world where we can explore human things on grand scales.”

When it came to creating Max, Parsons admits that he and his co-stars were given carte blanche by the series’ producers -- although there were stringent guidelines to which they were told they must adhere.  “It was really up to the three of us,” he said, speaking of Lily Cowles and Michael Vlamis, who also play aliens-as-humans (Isobel and Michael, respectively).  “We sat down with the show's creator Carina Adly Mackenzie and really talked about what it was like and what it meant to be an alien in our world here.  We aren't the original series, and we are drawing from the books, so what does that look like?  How are we going to play that out and what sci-fi things can we add in?

“But we always wanted to make sure we went back to that human element,” he continued.  “While we are aliens, we have been ‘human’ for 20 years.  The dichotomy of what we live with day to day is really a part of why the three of us are so close and why there is an unbreakable bond.  It's literally the three of us against the universe.” 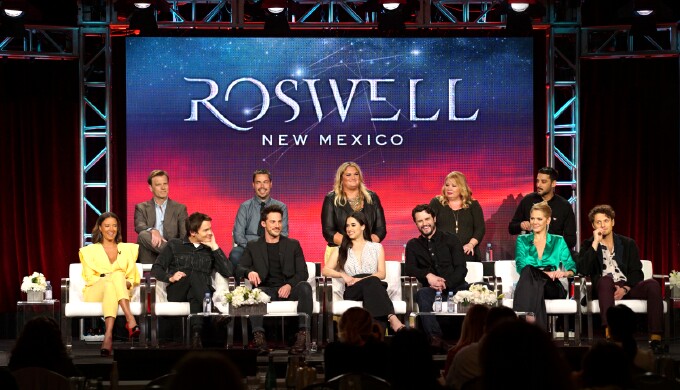 The first step for Parsons in creating Max was to read the Roswell High books.   “It always goes back to the source material,” he explained.  “Melinda Metz wrote a wonderful series of books and our job is to honor that and bring [them] to life. Carina would highlight passages for me, just to get insight into something like, ‘What is it like to bring someone back to life?’  Melina talked about that in the books and describes it in the first-hand experience.  The books were wonderful sources to draw from.”

On the surface, Max may appear gentle, yet Parsons said that if people dig deep enough, they might feel less assured that it's a real character trait.  “You have to keep in mind this is a man who's been lying for 20 years and has become very good at it,” he said.  “It doesn't mean he's a bad person, but there’s so much room in there to explore things like, what has he had to do to survive?  What has he had to do to protect his [family]?  Why is he so hesitant to [open up] to Liz (Jeanine Mason) and be honest with her?  There are 20 years of lies and abilities that nobody fully understands, not even Max.”

For the Australian born, Texas-raised actor, feeling like a fish out of water isn’t exactly an alien concept.  It was his experience when his American parents moved back to the United States.  “Having parents that were American helped, but I moved here at a young age and my accent was all over the place,” he recalled.

“When I left high school, I had to sit with my acting coach and learn how to speak normal American because I had a half-drawl Australian/Texan accent,” he continued.  “It was a weird drawl, but it was how I talked and I'm sure people were confused and thought I was making it up.  I had to sit down and study a standard American accent.  Now, after a few too many pints, people start to ask what's happening, as my accent will start going all over the place again.  Playing [Ethan Lovett], an Australian for three years on General Hospital, which was one of my first jobs, I had to forget all the training I'd just done.”

While each genre character Parsons has played holds a special place in his heart, it’s Max that stands out.  “Max would have to be my favorite because in my mind he is so complex,” he explained.  “Jackson [on The Originals] was fun, but he was the safe husband.  James was fun in his own way with Lafayette on True Blood.  I loved that character, and until this, he was probably my favorite.  Max seems so much more rounded because there's this whole hidden life and origin, and that’s something so fun to explore for me.”

Roswell, New Mexicois telecast Tuesdays at 9 p.m. on The CW.