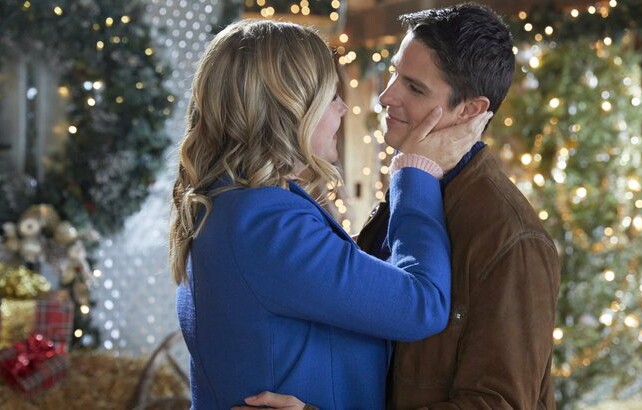 Dashing Hallmark actor Sean Faris continues his long association with Hallmark Movies & Mysteries this weekend in the network's A Veteran’s Christmas, part of its annual Miracles of Christmas programming event.  It’s a relationship that began with the 2011 Hallmark Hall of Fame Valentine’s Day presentation Lost Valentine, one followed by Christmas with Holly.  Faris (pictured at top right) is thrilled to return to Movies & Mysteries (following last year’s An Uncommon Grace) -- but it is still his first-ever Hallmark outing that holds a special place in his heart.  “I became a member of the Hallmark family when I got to work with my favorite actor of all time and in the whole wide world -- Betty White -- on Lost Valentine,” he raved during an exclusive interview with MediaVillage.  “I love Betty White!  Hands down she is my most favorite actor I have ever worked with.  I’ve worked with some pretty dope people, but she takes the cake and runs away with it.  I mean no one even gets a chance to look at the cake, much less get a bite.

“When we were done filming I bought her a Superwoman costume as a wrap gift because she is old-school,” he continued.  “She was in her 80’s and would work up to 15 hours a day and didn't leave the set.  She would tell jokes all day long, just making people laugh and you could see the little gleam in her eye before she got to the punchline.  She would just enjoy hooking you into her jokes.  She is just incredible in every possible way.” 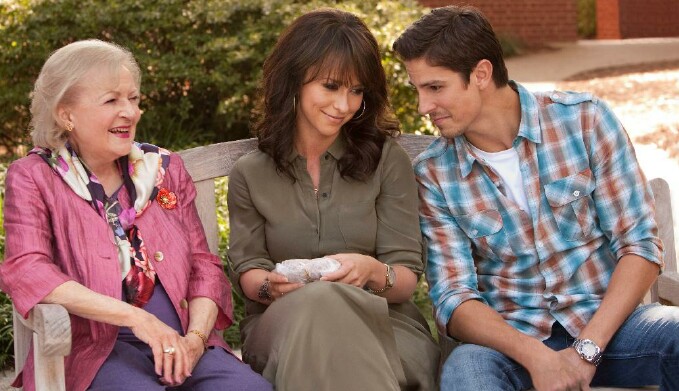 In A Veteran’s Christmas Faris stars as Joe Peterson, the judge in the sleepy town of Rivers Crossing.  While his life is idyllic, his dream of relocating to Chicago and tackling bigger cases clouds his appreciation of the beauty that surrounds him – until he meets Captain Grace Garland (Eloise Mumford), an honorably discharged Marine traveling across the country with her white lab Christmas.  Benevolent Judge Joe offers Grace a place to stay when her jeep breaks down, never guessing she will be the one to open his eyes to the joys of small-town life.

According to Faris, a big draw to the project was reuniting with his Christmas with Holly co-star Mumford.  "Having done a Hallmark Christmas movie together, we knew what was going on with each other," he explained.  "There was real comfort and chemistry -- the whole nine yards.  Everything was already there, and we had an understanding.  So, there was a lot of mutual support."

The only problem was nature, which presented various challenges throughout the production.  "We had to deal with the storms that hit North Bay, Canada," he recalled.  "It was a 15-day shoot and we had wind storms that pounded us and little preparation [for them].  Production found a way to shoot indoors, but we needed to get one exterior shot, so we waited until the storm passed and got it at 2 a.m.  We had to, as we'd never get that location again, but it all worked out.

“This movie was a little tough because I was off the grid leading up to filming,” he added.  “When I got the call they wanted me to do it I was actually in Hawaii with [my wife] and had the hurricane on top of us.  Immediately after that, we flew back to Los Angeles, dropped our bags and the next day we were in an RV headed to Burning Man to celebrate our anniversary, as we’d married there the year before.  Basically, I had two days to prepare before catching my flight to film.”

The benevolent side of his “Jimmy Stewart-esque” Judge Joe character was also something he absolutely identified with.  “I did feel a kinship with him,” he shared.  “Every year my wife and I feed the homeless in our local area.  For her birthday this year in June, I surprised her with a day of giving.  We view life from the perspective of giving, not taking.  So, I bought peanut butter, grape jelly and four loaves of bread, and we went to our local park and fed every homeless person there.  We often do stuff like that, as our view is ‘we’re all in this together.’   Helping those less fortunate is what we should be doing.  Deep down for us, that's where true happiness lies.”

Faris is hopeful there’s another Hallmark Valentine’s Day project in his future and is currently busy planning Christmas with his family.  “My wife and I are still kinda figuring out our traditions,” he smiled.  “It’s Thanksgiving with her grandma in New York, but Grandma Farris owns Christmas Eve in Ohio.  Christmas is about love and unity.  Just seeing my nephews smile from ear to ear -- putting their gifts aside and spending time together.  Gifts are nice and all, but the gift of time is priceless.  It’s the most valuable thing you can give.”

A Veteran’s Christmaswill be telecast Sunday, November 11 at 9 p.m. on Hallmark Movies & Mysteries.