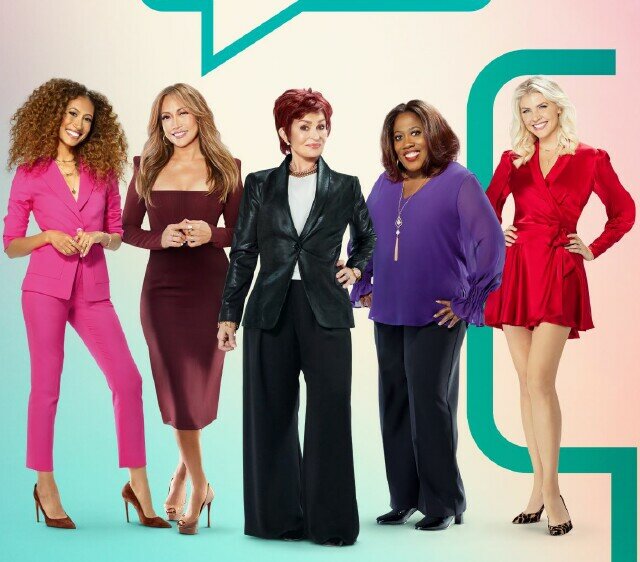 I don't regularly watch CBS's The Talk -- I guess I just don't have enough stay-at-home mom in me. But it has recently been the talk of the town, so to speak, due to a combustive discussion on the March 10 show involving British royalty, Piers Morgan, now former co-host Sharon Osbourne, and still current co-hosts Sheryl Underwood and Elaine Welteroth. None of these topics or people that I just mentioned are really my cup of tea, but this particular tea was spilled in what I would describe as an astonishing display of textbook white fragility by Osbourne -- during a live telecast on broadcast television. Let's break down what was said, who said it, and why it matters -- because it very much does.

To be fair, even though many of us couldn't care less about what British royalty is doing -- we have other things to think about -- a large part of the country follows these people like they're a Kardashian's Instagram account. So, when Meghan and Harry, had a chat with Oprah (during Oprah with Meghan and Harry: A CBS Primetime Special) that included allegations of racism and discontent in the royal family, and Meghan's apparent grappling with suicidal thoughts and the lack of a reprieve or any assistance in that regard, it all became rather relevant to many a Markle fan -- especially those who saw something of themselves in the former Duchess. I mean, let's face it, it's not every day that an L.A.-born woman of color marries a literal friggin' prince.

This brings us to outspoken British journalist and TV personality Piers Morgan, whose penchant for beefing with people on live TV is well documented. (If you ask me, he mostly just comes off as a hater.) From what I could gather, Markle and Morgan were familiar, at the very least, way back before her life became a Disney movie that quickly turned into more of a Jordan Peele flick. They supposedly met for friendly drinks at a bar back in 2016, after which Morgan sent her to another location in a cab where she just so happened to meet Harry. From what I've heard in the streets, Morgan has told this story a million times over, probably because after that night he never heard from her again and he's salty about it.

After the interview with Oprah, Morgan blasted Markle on his program, ITV's Good Morning Britain, by defending the crown against the accusations of racist behavior towards Markle, and saying things like how he "didn't believe a word" of her and Harry's interview, specifically her testimonial about her mental health. When confronted on the air by his own colleague, weatherman Alex Beresford, he up and walked off the stage, choosing a dramatic exit over an actual response.

So, what's all this got to do with The Talk and Sharon Osbourne -- the only original co-host who, prior to that fateful week in March, had remained on the ever-evolving show since its premiere on October 18, 2010? (Osbourne is pictured at top, center, with current co-hosts Elaine Welteroth, Carrie Ann Inaba, Sheryl Underwood and Amanda Kloots.) Well, as she made very clear on March 10, in response to the massive condemnation of Morgan on social media following his remarks about Markle, she and Morgan are good friends and she was standing by him. That prompted an excitable back-and-forth among the ladies that included implications that Osbourne was, perhaps, not anti-racist, or not anti-racist enough.

It didn't take long for the initially calm Osbourne to become visibly uncomfortable and extremely defensive, even dropping a beeped cuss word or two. "For me, at 68 years of age, to have to turn around and say, 'I ain't racist.' What's it got to do with me?" she demanded. "How could I be racist about anybody? How could I be racist about anybody or anything in my life? How can I?"

Underwood tried explaining the fact that no one was calling her a racist but was instead questioning her lack of condemnation for the sentiments her friend put forth. Welteroth, one of the newer co-hosts on the show, attempted to calmly explain unconscious bias.

Osbourne wasn't having any of it. Her side of the conversation continued to rapidly devolve as she then began questioning how anything Morgan said was racist at all, which culminated in her yelling "educate me" at Underwood multiple times. After a shaken Underwood began to carefully explain why Morgan's words were so upsetting, Osbourne berated her now former co-host a little more. "Don't try and cry," she demanded, "because if anyone should be crying, it should be me!"

Should it, Sharon? Should it?

The show was live the following day, but there was no energy there whatsoever. (It opened with Amanda Kloots attempting to put the previous day's convo behind them all.) And then it was placed on hiatus for a few weeks. During that time, an extensive investigation was conducted by CBS, Osbourne subsequently left the show, and the remaining co-hosts and others received diversity and inclusion sensitivity training. When The Talk finally returned on April 12, the first Osbourne-free episode was devoted to a discussion about the March 10 episode.

For those who need it, the simple answer to Osbourne's question about why what Morgan said/did was racist is this: To deny any woman, especially a woman of color, their truth is not only insensitive, but sexist, and akin to victim blaming. Furthermore, Markle's case in particular adds insult to injury not only for her, but for every woman who sees themselves in her, being that she's a public figure. Additionally, it doesn't help that Morgan was being this blatantly dismissive of her while being a rich white man in a position of power.

Osbourne messed up, not by holding her friend down (which is something most of us would probably do) but by creating a distracting and divisive narrative that somehow made her the victim in all this. What's worse, she put the burden of explaining racism on a person of color, which is not our job. The burden of seeing past one's own privilege and educating oneself about the plight of his or her fellow humans falls to those who are ignorant on the subject, not the disenfranchised. Also, there's the fact that not condemning Morgan's words/actions isn't too far from co-signing them with her silence, which she pretty much did. Osbourne put the cherry on top of it all when she, as mentioned before, instructed Underwood to not cry, because not only was she showing her privilege by having asked to have racism explained to her, she was actively exercising her privilege by reacting in a free and open manner, while Underwood, trapped by the inequality of the situation, had to be careful to filter her emotions.

"I'm not tearing up because you've hurt me or I want some sympathy," an emotional Underwood said on April 12 when reflecting on her exchange with Osbourne. "I'm tearing up because I had to restrain [myself], because if I had responded then I would have been the angry Black woman."

So, what's the moral of the story? We currently live in an era where no one's tolerating the bullshit anymore, and it means it's no longer acceptable to "just stay out of it." Anti-racism involves taking action, especially against things like bias, systemic racism and oppression. It's a conscious effort that requires deliberate action, even if that action is just telling your friend that they're dead wrong.