Story of WGN’s “Underground” is as Relevant Today as Yesterday 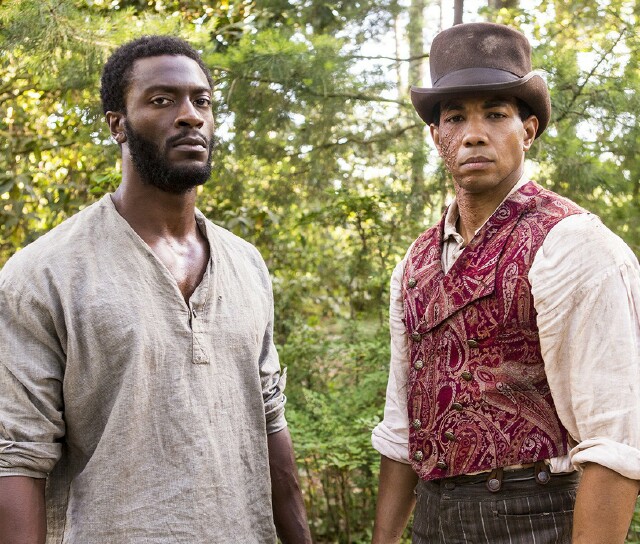 Pasadena, CA – In an inspired approach to series promotion at a Television Critics Association tour, WGN America on Friday presented two back-to-back panels for the same show – the sophomore season of Underground, its acclaimed drama about slavery and abolitionism in the years leading up to the Civil War. The first panel featured several members of the cast talking about their characters and storylines. The second was comprised of the show’s executive producers, including John Legend, who also appears in the show as abolitionist Frederick Douglass.

The two Underground panels followed one for another sophomore show on the network, Outsiders. In another unusual and very smart move, WGN took over another ballroom in the Langham Huntington Hotel down the hall from the Grand Ballroom, where all press conferences during this tour have taken place, and turned it into lounge area that was open throughout the day.  In this location critics could informally drop in at any time and talk with the network’s talent, executives and publicists or schedule one-on-one interviews at specific times in the room.  It was a very welcome change from the way most talent is shepherded through TCAs – they appear on stage for sessions, are then surrounded by dozens of reporters during frantic scrums afterward, and then they disappear, never to be seen again, unless their network has a party that evening and they are obligated to attend.  (Note:  Sometimes the talent is none too happy to be suddenly immersed in a scrum.  A “major” star who appeared here on Friday to promote a show – not a WGN series – recoiled in horror at the end of that network’s session as dozens of reporters scurried toward the stage, asking the nearby handlers, “Are they supposed to do that?”)

Talking about the impact that the first season of Underground had here and in other countries where it is seen, and the likely response season two will have, series star Alano Miller (who plays cunning slave Cato) said, “The first season was empowering to a lot of people.  This season is about ‘citizen versus soldier.’  So when you talk about that, it’s about the fact that, as citizens, we can sit by and let these things happen, these atrocities, or [we can be] soldiers and actually stand up and do something about them.  We are in that time right now, so this show is very relevant to that.

“I think Underground as a whole will constantly be relevant because it is about humans finding their voice,” Miller continued.  “It’s about them taking a stand and saying, ‘We are here. We should be respected. We should be equal.’  All over the world people are being taken advantage of, and they’re trying to be seen and heard.  This show does a brilliant job of doing that this season, as well as it did the first season.”  (Miller is pictured at top right with co-star Aldis Hodge.)

Legend spoke with great insight about the pressure of portraying so iconic a figure in American history as Frederick Douglass.  “He was the most photographed man in the 19th century and led the abolitionist movement in a way that will always be remembered and revered,” he noted.  “The opportunity to play him is a humbling thing for me to do. Mind you, my role is very small in the overall arc of the series, and I don’t want to overinflate it. It was not much more than a cameo, but it was an honor for me to be part of the show in this way.”

Asked about “Heaven’s Door,” the moving theme song he produced for the series, Legend replied, “I was inspired by American history … understanding what the ideals of America have been since its founding and how we have often failed to live up to those ideals, I guess, with a sense of the irony of being the land of the free, the home of the brave, while also being a nation divided by slavery and racism and all the issues we’ve dealt with over the centuries of this country. This song is kind of addressing that duality of where our ideals are and how we often fail to live up to them.”

One critic wanted to know if the current mood of the country -- the idea that we as a people are somehow divided -- influenced the writing of season two.

“Of course,” replied co-creator, co-writer and executive producer Joe Pokaski.  “The sad truth is that it’s almost like we’re having the same problem that never quite went away.  The more we read things from 1858, it’s amazing how much they’re still very much relevant today.”

“This story is as old as time, but as contemporary as today’s headlines,” added executive producer Anthony Hemingway. “That’s the beautiful thing; I think these revolutionaries created [and] left us with a really great blueprint to pull from, to draw from, that I think inspires us to move forward and to find our own acts and activism … trying to find that healing mechanism that we’re always looking for to heal.”

Co-creator, co-writer and executive producer Misha Green, did not hold back. “I don’t think we changed anything for this season,” she declared.  “I think this country was built on racism and sexism, and I think our soon-to-be president is again going to be racist and sexist.  So I think that this was all very much in line with where we are going with the season and a story we felt that was important to tell and keep telling and keep reminding people that, you know, the majority of Americans are the people who are in the underground. They are heroes. They were fighting against it. They were seeing injustice and stopping that, and I think that we can still be that today.”

“What we’re learning as we react to this election is that even when there’s progress freedom is not guaranteed to stay in place,” Legend said. “We have to be vigilant to maintain freedom, to free others and, when we see injustice, to fight for justice.  Even after the Civil War, when so many slaves were freed, after that time, we went through a period where the South basically rebelled again and said, ‘We’re going to institute Jim Crow. We’re going to institute lynching.’  So whenever we’ve made progress in this country, it’s been great, but there have also been forces that have tried to take us back to a previous era when we weren’t as free.  That means the people who believe in freedom have to be vigilant and have to keep fighting for freedom. Even when we make progress and even when we have accomplishments that we’re proud of, we can’t take it for granted that that’s going to stay in place.

“We’re going through a period now where Donald Trump has promised to make us a less just and a less free country, and those who believe in justice and freedom are going to have to stand up for it,” he added.

Reflecting on a more positive presidential experience -- screening Underground at the White House for President Obama -- Legend noted, “Much has been made of the idea that a house that was built in part by slaves now houses the first black President.  It’s a powerful thing for us to be able to show this series about slavery and about those who fought to overcome the evils of slavery, being able to play that in the home of the most powerful seat in the world.  It was very powerful for us to be able to do that.”