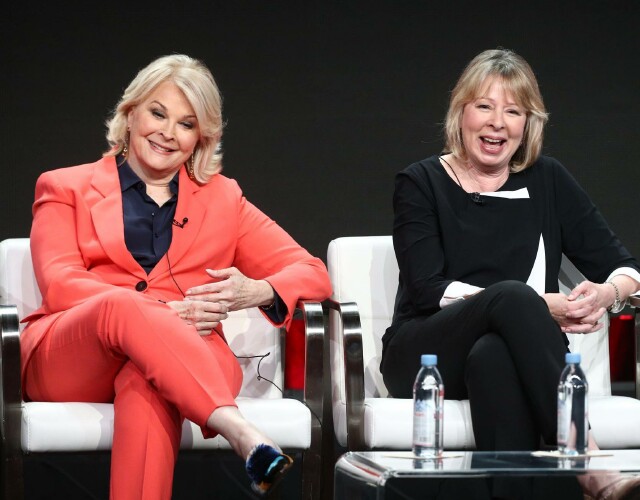 Beverly Hills, CA -- In its heyday, CBS’ Murphy Brown never shied from tackling all manner of political and social commentary.  In fact, the show famously and inadvertently became a part of that commentary in 1992 when the title character became unexpectedly pregnant and opted to have her baby, sending then-Vice President Dan Quayle into a public diatribe that had many people wondering if he understood that Murphy was a fictional character.  In the process, Murphy Brown became meta before being meta was a thing.

For ten seasons (1988-98) Murphy Brown reigned supreme in the ratings, earning multiple Emmy Awards for star Candice Bergen and other honors along the way.  The core cast of the beloved sitcom has been reunited for a series of new episodes that promise to be just as topical.  Was it an accident the series finale was entitled Never Can Say Goodbye?  Apparently yes. “I did my first interview with my hometown newspaper, The Buffalo News, [and was] reminded of that,” executive producer Diane English told reporters at the Television Critics Association Press Tour earlier this week.  "I guess that's kind of true, so here we are again.”

According to English, this wasn’t the first time she toyed with the idea of reviving the show.  During the 2012 presidential campaign when Sarah Palin was running alongside John McCain thoughts of a possible six-episode mini-season were top of mind but never came to fruition.  Fast-forward to the last Presidential election. “[Warner Bros. Television] Chief Executive Peter Roth came to us and said, ‘Would you consider bringing the show back?’" English told the press.  “Candice and I were kind of reluctant because we felt we had done it.  But as the months ticked by, it started to feel like we had maybe a real reason to come back, and so Peter said, ‘What if I pay you to write a script?’  That got my attention.”

Paid in advance for her trouble, English set pen to paper, and nine months later the “daunting experience” of revisiting the beloved character was finished.  “It came pouring out of me,” she laughed.  “I handed the script to Candice and said, ‘What do you think?’”

“I said, ‘Let's do it’!” Bergen recalled.  Still, before a firm decision to start production was made, some logistics had to be taken into account.  “We moved the show to New York because I have to be in New York for other reasons,” said Bergen.  “They built Murphy's townhouse on a soundstage in a studio in Queens.  When we saw [it] for the first time we all got tears in our eyes.  Murphy was so important to all of us, and so to be back there, we're just grateful.” 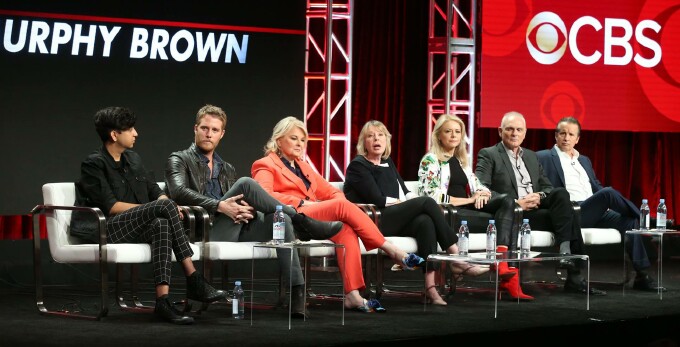 Twenty years have passed since we last saw Murphy and the gang, so expect a few tweaks when the show premieres on CBS in the fall.  “We're older by a lot,” joked Bergman of the FYI gang, now toiling on a show titled Murphy in the Morning.  “Murphy's son, who you saw when he was being born in Birth 101, is now played by Jake McDorman (Greek, Limitless) and he's also a television journalist who is working for an opposing network called the Wolf Network.  (Pictured above, left to right:  New cast members Nik Dodani and McDorman, Bergen, English and returning cast members Faith Ford, Joe Regalbuto and Grant Shaud.)

“Murphy will always be in recovery,” she continued, commenting on her character’s history of substance abuse.  “We do not touch on that in the first episode because there's so much to deal with.”

“But if ever she was going to drink, [now] is exactly the time,” added English.

The new series will center on Murphy, Corky Sherwood (Faith Ford) and Frank Fontana (Joe Regalbuto) working on the new morning show, with Miles Silverberg (Grant Shaud) producing it.  Not only are the characters faced with a new political climate; a whole new world has arisen since 1998 with the meteoric rise of technology and social media.

“When we left these characters, there was no internet,” English noted.  “There was no social media.  Cable news was just getting started.  So to take these characters and put them in the world of 24-hour cable news, which is what their new show is, it was very rich for us -- very, very rich.”

“I think, much like Murphy and Frank and Corky on television, and much like ourselves, they don't like being sidelined,” added Bergen.  “They’ve all been in retirement for the last few years and they want to get back in the action, especially now when there's so much action.  So they just want to be back in the game, and it's a game that they're all especially good at.”