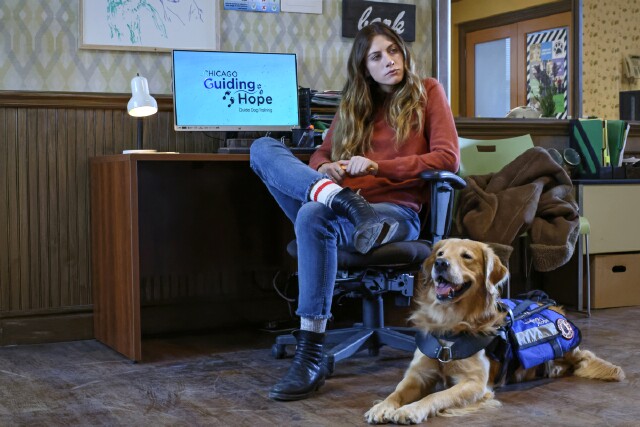 The gritty crime drama In the Dark returns tonight, and what was highly engaging television for The CW and its streaming platforms during its freshman year (followed by well-received encores on Netflix) is now genuine Must-See TV.  The series, starring Perry Mattfeld as anti-hero Murphy Mason, a visually impaired vigilante of sorts, doesn’t miss a beat as season two picks up immediately following the climax of season one, when Murphy solved the murder of her friend Tyson.  It was anyone’s guess where season two would go -- and no one could have predicted it would be into overdrive with some of the most compelling and well-crafted storytelling I’ve seen in years.  The first eight episodes are dynamite.

For Mattfeld (pictured at top), getting the opportunity to develop and evolve the Murphy character, along with furthering relationships with her ensemble cast, is something she relished, and for which she is grateful.  “I’m still learning Murphy,” she told me during an exclusive interview.  “Someone asked me after season one that if the show didn’t continue, was I ready to say goodbye to her?  The thought was heartbreaking, as there’s so much to her I’m still discovering.  I definitely think in season one we had to explain and show the worst version of Murphy to understand why she is the way she is.  I wouldn’t say Murphy has completely changed in season two, but I feel I’ve been given some really nice places to go with her.

“Even though she got closure in season one, moving forward in season two there’s so much more to root for with Murphy,” she continued.  “It’s hard for me as an actor to find a balance between how rough around the edges she is, sarcastic, and at times plain rude, with the good in her concerning her relationships and those parts of her that are tender and sweet.  I think now knowing her a lot better, you do want her to come out on top.”

One notable change in season two is that there is more of an ensemble feel to the series.  With all the central characters forced into a darker criminal world, Murphy’s circle of friends has expanded, as has her vulnerability -- and that’s something Mattfeld was also eager to explore.  “She pushed her dog Pretzel away because he represented help,” she recalled of the first season.  “[Murphy] resists everyone and everything around her, and we see in season two how she’s slowly letting people in and letting them help make her a better person.

“I always said season one felt like a prologue,” she continued.  “Season two is where the real story begins.  We learned the world around this woman, and now this is really the first chapter for this ensemble cast.  I pray every day we get to do more and more.  I found this season so incredibly paced.  It flies by from episode to episode.  It’s nail-biting and I lost days watching it.”

Mattfeld said that much of the behind-the-scenes crew on the series, who had become family, returned for the new season, with her and her cast-mates personally reaching out to ask they return.  However, one crucial piece of the puzzle couldn’t be replaced.  “Unfortunately, Levi (the dog who played Pretzel) got sick,” she shared.  “That was devastating for me.  She has some health issues we weren’t expecting, and she’s still so young.  But her brother Tripp was able to step in.  They come from the same household, so Levi was able to come to work with Tripp, observe and offer some acting tips.

“I have a close bond with both dogs and stay very involved with Levi,” she added.  “I love that dog like she was my own, but her brother is so talented and of course I have a bond with him, too.  It’s impressive that one dog carries the show because people think we have a team of them, and we don’t.  Levi loves working, so even if she can’t do the job, I know her trainer wants her to be around her castmates because that’s where she’s happiest.  I would have her take and nap with me in my trailer at lunchtime.”

As the show continues to gain momentum (and will be in production for a third season once the Coronavirus shutdown is over) Mattfeld is thrilled people of all ages and demographics are finding it.  “To be stopped at airports and reached by people from the visually impaired community makes me feel so good,” she said.  “A lot of members of that community have mentioned sharing similar experiences to Murphy’s.  Or they love the fact that we talked about things like retinitis pigmentosa and it’s now in people’s vocabulary.  That’s an ode to Ryan and Jeff, two of our main writers who both have R.P., but have coped with it differently.  Ryan is the voice behind Murphy and Jeff is actually the inspiration for Josh (Theodore Bhat), one of the new characters in season two who is visually impaired in real life.

“Theo actually found out about In the Darkwhen The CW advertised they were looking for actors from the visually impaired community,” she shared in closing.  “He was washing dishes, had studied theater, and always continued to practice his craft.  This was his first opportunity and I’m so glad The CW gave it to him because he’s brilliant.”

In the Darkis telecast Thursdays at 9 p.m. on The CW.