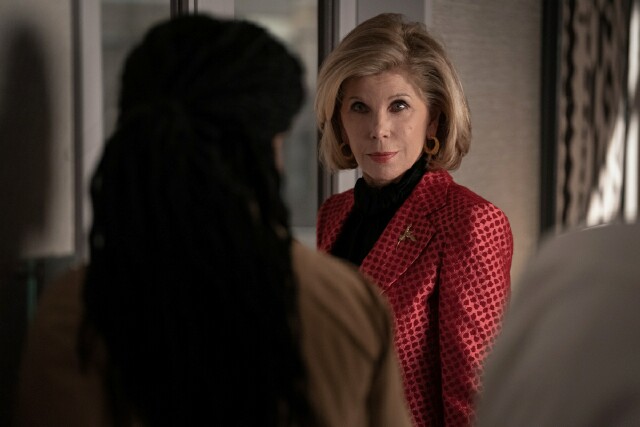 Where would we have been these last 12 years without CBS' The Good Wife (2009-16) and its spin-off The Good Fight (2017-present) on Paramount+? During that time, no dramatic series franchise has worked as tirelessly to educate its audience about the dangers and intrusions of social media and digital technology while also managing to entertain in so smart and sophisticated a manner. In addition, since its premiere shortly after Donald Trump took office, Good Fight has guided us through the perils and perplexities of his presidency and is now dealing with its aftermath, especially the ongoing investigation into the calamitous events of January 6.

There is so much to praise it is difficult to begin. Should I start with the best-in-class acting by its uniformly blue-chip cast, led by the luminous Christine Baranski (pictured at top) in a commanding performance as liberal attorney Diane Lockhart that's often as ferociously funny as it is daringly dramatic, and that of recurring player Gary Cole as her very conservative husband and big-time Second Amendment supporter Kurt McVeigh? The chemistry between these two, and the wise, unsparing dialogue they are given, combine to make Diane and Kurt one of the most interesting couples ever seen in a dramatic television franchise.

Or how about the storytelling itself, led by Robert and Michelle King (the couple who created Good Wife, Good Fight and another hot Paramount+ series, the consistently unnerving Evil). They are scary smart writers who are among the few people working in television I believe to be gifts from a higher power to the American viewing public. It was their ahead-of-its-time idea to have Lockhart be jettisoned from the Chicago law firm that bore her name in Good Wife and land as a name partner at a lower-profile, all-Black firm as a "minority hire" on Good Fight.

Indeed, Good Fight -- now in its fifth season -- has never for an episode shied away from exploring what it means to be a Black professional (or, simply, to be Black) in today's turbulent society any more than Good Wife moved boldly forward with its take on the cumbersome demands made on modern women seeking to balance marriage, motherhood, the demands of a high-pressure career and the desire for personal fulfillment.

But it's Good Fight's unfailing intent to explain (in terms we can all understand) how technology and its masters are manipulating us every day of our lives in such a way that we either don't notice (except when we do) or don't care (except when we decide to) that elevates it above so much of the rest.

This season the show is exploring and explaining the power of social media and its role in the destruction of journalism as we know it. (Should I use the past tense at the end of that sentence? The Good Fight is making clear that it might not be wrong to do so!) In a recent episode, a man who owns a bike shop sought to sue a woman who, following a minor disagreement, created a fake online news story about him in which he was singled out as a child molester. She also created several social media accounts "populated" by people (of the imaginary variety) accusing him of same. As a result, his reputation was destroyed, along with his business.

It turns out the real culprit in this appalling situation is something called Section 230, a part of the Communications Decency Act of 1996 which allows internet giants (including the show's fictional search behemoth, Chumhum, first heard about on Good Wife) to thrive unencumbered while newspapers (and the true journalists employed by them) suffer and die. It's explained in more detail in one of the terrific animated musical shorts for which The Good Fight is known. To sample the lyrics: "Here's the good news, everybody has a voice. Here's the bad news, everybody has a voice."

"The government has placed its finger on the scales in favor of internet platforms over newspapers and other press outlets," the shop owner's attorney (and Lockhart's partner at the firm) Liz Reddick (Audra McDonald, pictured above left) exclaims to the sympathetic Judge Claudia Friend (Bebe Neuwirth).

It's the testimony of a career newspaperman that further clarifies the issue. He explains that he spent two weeks chasing down the rumors about the bike shop owner, only to conclude that they were grounded in baseless gossip. That didn't stop the internet, though. He then reveals that his paper conducted a survey to learn where its readers turn for news. The top four responses were "Facebook, Twitter, Google and Chumhum," he said.

"None of which can be sued for defamation, libel or fraud under Section 230," Reddick added.

"Gawker was sued out of existence by someone who wanted to shut it down," the editor exclaimed. "That can happen to a newspaper or a website. But it can't happen to Facebook."

Next on the stand is a former Chumhum content moderator who is no longer working there because he developed PTSD. He was traumatized by what he referred to as "the churn," he said. "[That's] the constant turnover of bad content, some of it sad, homicidal, political … it never stopped." He blocked the churn, he added, but he also "highlighted, repositioned and featured" certain items.

"It felt like I was an editor," he admitted.

"In that you were blocking violent or pornographic content?" Reddick asked.

"In that we featured clickbait," he replied. "If it sparked anger or outrage, we featured it. That's how the site made money."

I won't reveal how Judge Friend ultimately ruled. (You can probably guess, and you would probably be right.) But I will add that this story had another layer to it: A very wealthy Republican named David Cord (Stephen Lang) puts Reddick Lockhart on a retainer in the amount of $12 million to keep fighting, ahem, the good fight against the internet titans.

The depths of his motives are as yet unknown, but for now, as he explained to Reddick, his goals are clear. "I want to save the country," he said. "January 6 changed everything. Too many people take America for granted. I don't."

This storyline, along with the one about the FBI coming after Kurt for potentially (if unknowingly) aiding one or more of the insurrectionists with their actions at the Capitol building on that fateful day, are powering this season of The Good Fight with the formidable gusto fans have come to expect. This is the kind of timely, topical, instructive info-drama that the prolific David E. Kelley used to bring us in his legal dramas, exploring issues that impact us all that we may not know anything about or understand, even if we think we do.

New episodes of The Good Fight premiere Thursdays on Paramount+.