UMC's “A House Divided” Has Potential But Needs Something More 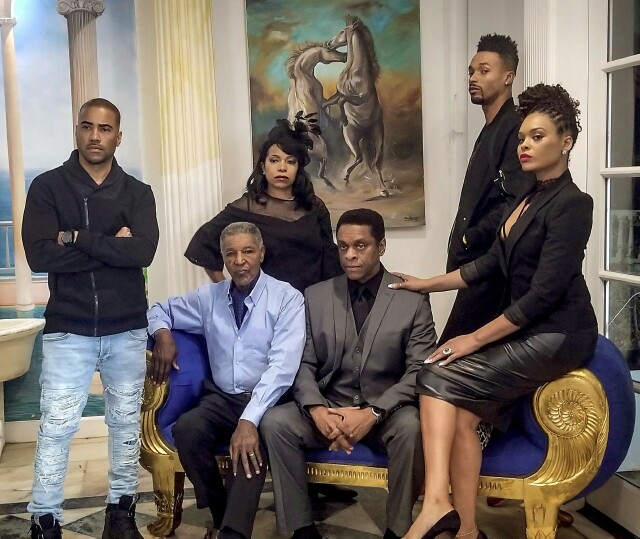 Dan Garcia’s multigenerational family drama  A House Divided has the same thing every school teacher loves finding in their students: potential.  How much, however, is debatable.  UMC (Urban Movie Channel) is AMC Networks’ streaming service for Black film and television, and while it has had success with some of its similar programs this one felt like they wanted it to be Tyler Perry’s A House Divided but fell a bit short of the mark.

A House Dividedfollows the Sanders family, wealthy descendants of a woman named Letty who used to be a slave, and blah blah blah.  None of that really matters, tho.  They’re rich, the father and grandfather run a bank, one of the sons is a rapper (I think) and the other is pretty much on his way to the NBA.  There’s also the daughter.  She has apparently been living in Paris.  She’s also a photographer.  What does she take pictures of?  You guessed it!  Paris.  (Actual lines: “I love Paris.  I love photography.  I love taking pictures of Paris …”) Ugh.  Long story short, these four somewhat divided relatives are all brought together by the maybe murder of the mother who, while confronting some professional gold digger she caught circling her husband, choked on some food and died while said gold digger kept a glass of water away from her.

I’ll bet you’re thinking, “This sounds like perfect TV!”  I know, right?  It’s not, though.

First of all, I’m no DP (director of photography), and I have great respect for those people, but I probably would’ve shot a great many things differently.  This was supposed to be a scandalous, daytime-esque urban drama, so give me some more close ups.  There are plenty to go around. Establishing shots are cool (though I would’ve changed a few of those, too), but in those supposedly intense moments it felt as though we were all too far away.  A good few seconds right up in the principle actors’ faces does a lot to sell emotion -- which is especially important when the writing’s a bit light.

Secondly, the writing.  From a logic standpoint, how is the mom’s semi-murder not the most solvable crime ever?  These people are supposed to be super rich.  Like, private community, guard-at-the-gate-type rich.  So, how would there be no record of this meeting between the family’s matriarch and an easily researchable succubus?  The meeting in question took place in the Sanders home.  At the Sanders family dinner table.  Was there not a single servant to lead this woman in?  There’s a stable on this property, and their property overlooks the ocean, but no one has ever had a single camera installed?  There’s no sign in sheet at the front gate?  Who the hell buzzed this lady in?  The guards?  Oh, there are no guards, either?  Huh.  Okay.

Honestly, I’m not even sure that I was supposed to care about Mama Sanders at all.  Yeah, her death is the catalyst for the events of the show, I guess, but she was also underwritten, under-developed and dead within about a minute of her introduction.  Also, fun fact: Choking is inaudible.  If she had actually been choking she would have been silent, because her airway would have been completely blocked by whatever the hell was killing her.  She definitely wouldn’t have been making whatever noise she was making before she died.  Just saying.

Anyway, I’m not going to get into everything writing related, but I will say this:  Being secretly gay is no longer a valid subplot.  One of the main characters turns out to have a secret same sex lover, which is supposed to be some kind of big reveal at the end of the episode, and it’s pretty weak sauce if you ask me.  I really feel like that whole idea is played out.  He could have (and should have) been openly gay, and it could have (and should have) had absolutely no bearing on his or anyone else’s narrative whatsoever.  That would have been a million times better because, and please hear me on this, we shouldn’t still be normalizing an unhealthy interest in who everyone sleeps with.  His sexuality should’ve been a passing detail, the way that every straight character’s sexuality always is.

So, where’s that potential I spoke of earlier?  Well, it makes a quick yet effective appearance during a scene between the aforementioned ratchet Parisian photographer (the one who takes pictures of Paris, if that wasn’t clear) and her aunt, just after the mother’s funeral.  Did I mention the photographer is sleeping with her own cousin’s husband who’s a stable hand on the Sanders property?  Yeah.  Anyway, right before homegirl plays herself by trying to drunkenly confront her cousin (who isn’t the bad guy, mind you), her auntie pulls her aside. They have a sincere and eye-opening heart-to-heart about Mama Sanders, her past, and the subject of struggle.  It’s an organic moment that allows for natural-feeling exposition.  It shows, not tells, who the daughter and aunt are, while also painting a positive post-mortem image of Mama Sanders.  It was framed well, got in pretty close on the singles, and conveyed exactly the vibe it was meant to.  It was an absolutely shining testament to what the rest of the show could have (and should have) been.

I know, I have many, many criticisms.  So, to sum them up, I’ll put the rest out there in the form of simple questions.

Why are the Sanders rich enough to live in supposed opulence, but Papa Sanders has no windows in his office?  It’s way too small an office for someone as powerful as he’s supposed to be.  It feels like the office of the manager at an insurance company.

How big is this large boat/yacht that the rapper son lives on?  Does he live on it?  That part legitimately wasn’t clear.

Also, where are everyone’s cars?  I get that it may not be imperative, per se, to have an expensive car or two on set, but when one is pretending that these people are rich as they’re supposed to be, renting one or two Lamborghinis or Rolls Royces would’ve really helped sell that dream.

Lastly, why wasn’t the entire foundational plot laid out in the first episode?  I mean, the show’s called A House Divided, but by the end of that first episode it seems pretty clear that the mother’s death literally just reunited all of them.  They don’t seem that divided to me, so what’s the drama?  Did she leave one more money than another?  Would that even matter? They’re all already wealthy.  Is her death being investigated as a murder?  I’m pretty sure they all still think it was an accident (which it weirdly kind of was).  Is the drama supposed to be that Papa Sanders has a side chick?  I honestly don’t know, and that’s a huge part of the problem.

It may seem like I’m being harsh, and trust me, I can hear the little voice in the back of my head telling me to just shut up and support “my people,” but I have a pretty high standard to which I hold just about everything I watch, regardless of who it’s made by or for.  Let’s be honest; this show clearly wanted to be something it didn’t end up being.  I wanted it to be good, but I feel like it made the moves that it thought a show like Empire or The Haves and the Have Nots would have made, instead of making moves that benefited its own overall narrative.

I needed creative risks, striking visuals and a sound palette that felt familiar yet specific to the vibe and style of the show.  I got none of those things.

A House Divided isn’t flat-out terrible, but it definitely could be straight-up better.

The first episode of A House Divided will be available July 18 on UMC.  New episodes will be added every Thursday through August 22.