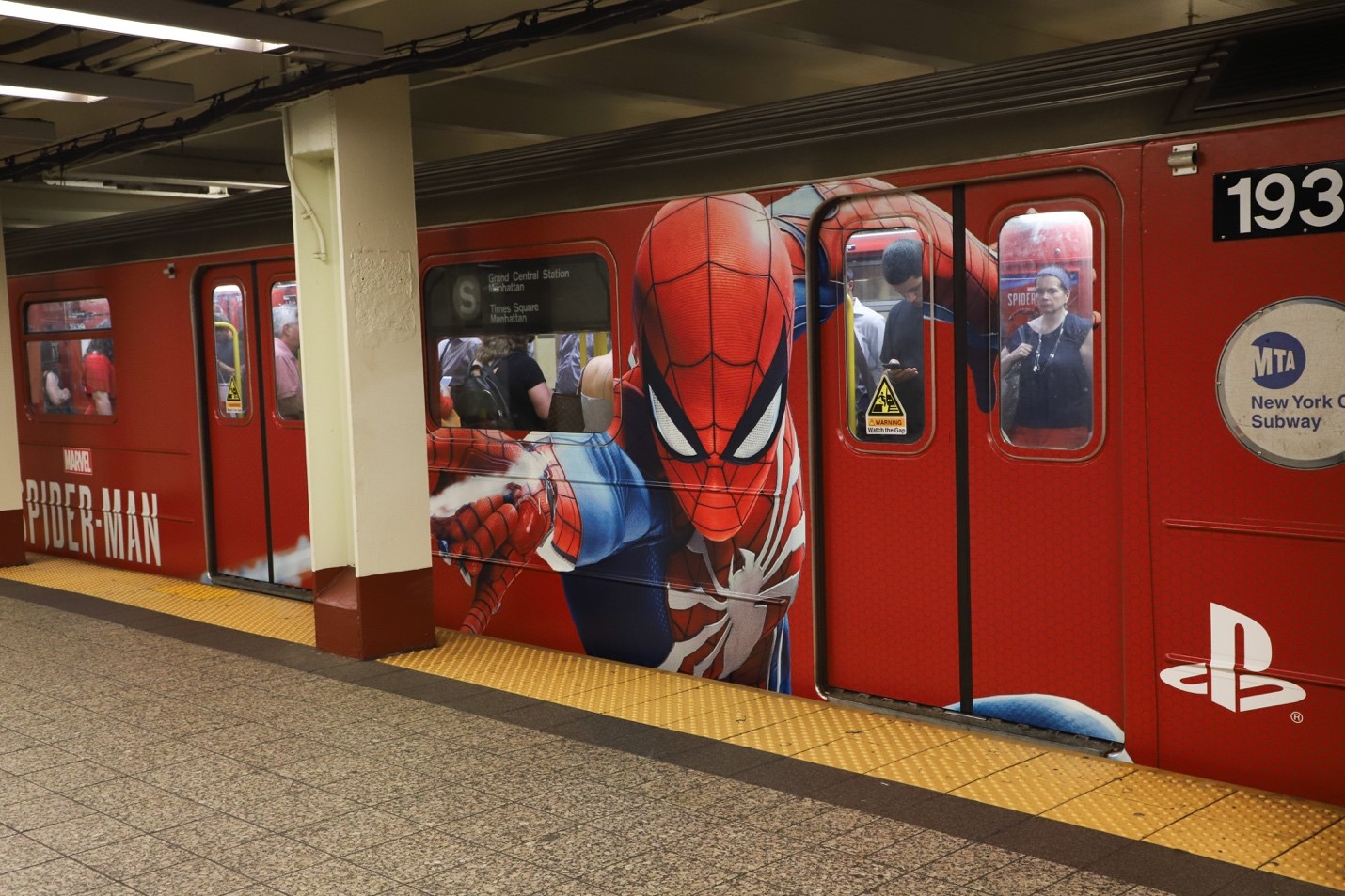 I entered the OOH industry with a background in print magazines and digital publishing, and one of the key differentiators of the editorial world is that it's content-driven.  Publishers create content that will (hopefully) compel the reader to click, then engage with it, then share. OOH media actually isn't too far removed from this concept and is in fact on the path to completely shifting to this approach.

But even in the editorial world, there is a fine line between organic content and paid content -- and readers know the difference.  What's so unique about OOH is that this line doesn't exist.  Everything in the OOH world is for the most part an advertisement and consumers know that, but most importantly they're okay with that.  This means that brands can do things with OOH that they can't do online, like creating ads that double as content. 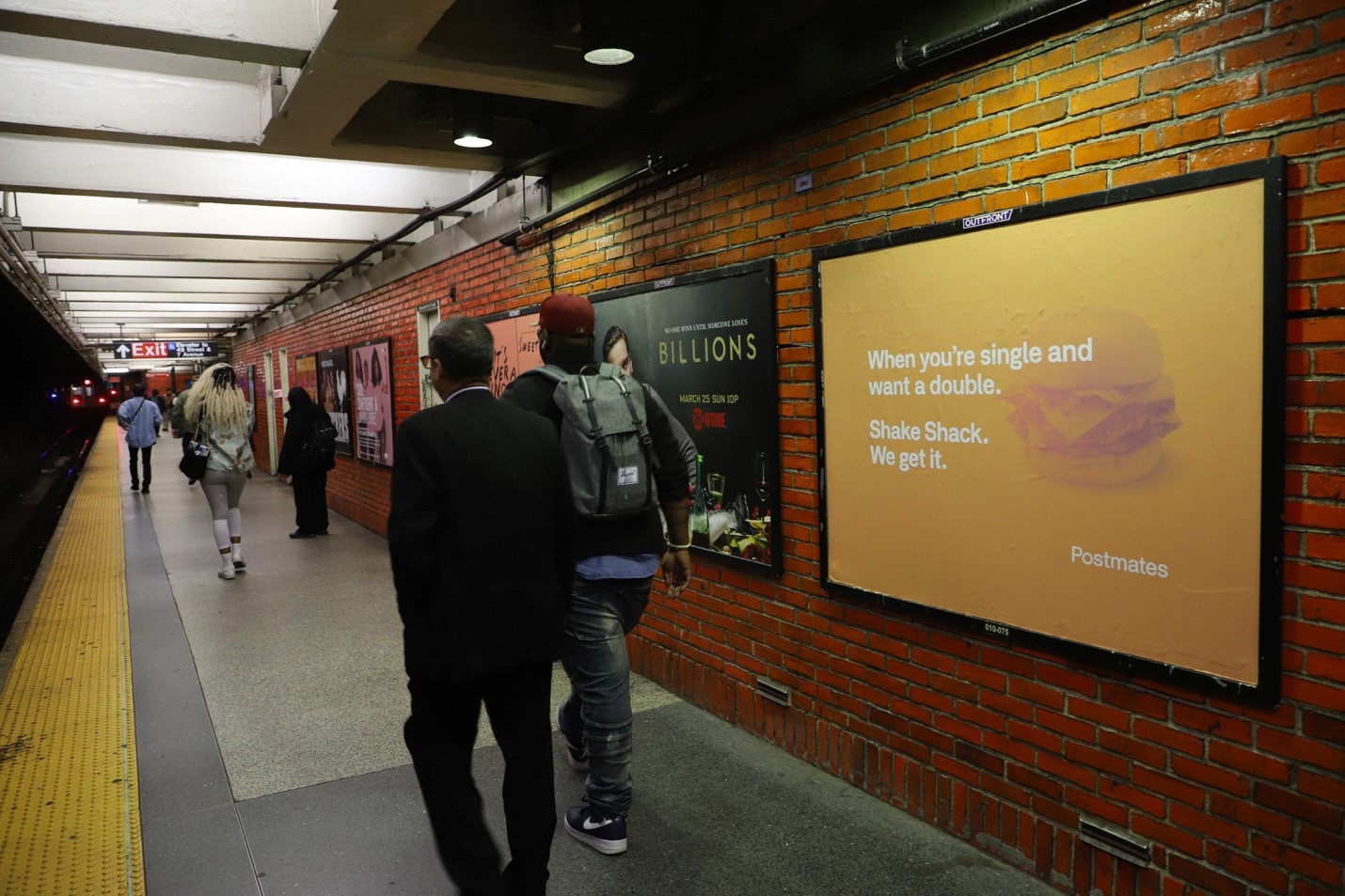 Making an OOH campaign that doubles as content is exactly how you bridge the gap between OOH and social media, because content-driven OOH will do well on social media.  But how do you do that?  Luckily, I've done the hard work for you.  Over the past nine months I've monitored and analyzed the social performance of over 100 OOH campaigns by both national and local brands with a social listening tool.  From this research, there are a few brands that have stood out as the MVPs.

What do these brands do so well?  They look at OOH beyond its fundamentals.  It starts with your audience and how they consume content.  There are four trends I've seen brands utilize to create campaigns that do well on social.  Use one or more of these trends in your next OOH campaign and your brand might be the next one to break the internet.

We are currently living in an experiential economy; that is, consumers are increasingly spending money on experiences rather than things.  So, choose an experience that matters.  For example, Spotify and the Brooklyn Museum created a station domination in New York City's subway system to promote their new David Bowie exhibit.  This wasn't any ordinary takeover; they transformed subway posters into Bowie paintings, created plaques mimicking subway signs, provided Spotify codes for exclusive Bowie playlists and sold David Bowie metro cards that became instant collector's items.  The Bleecker and Bowery Street stations looked like the ultimate shrine to the late icon as the campaign helped the museum reach its goal of two million visitors. 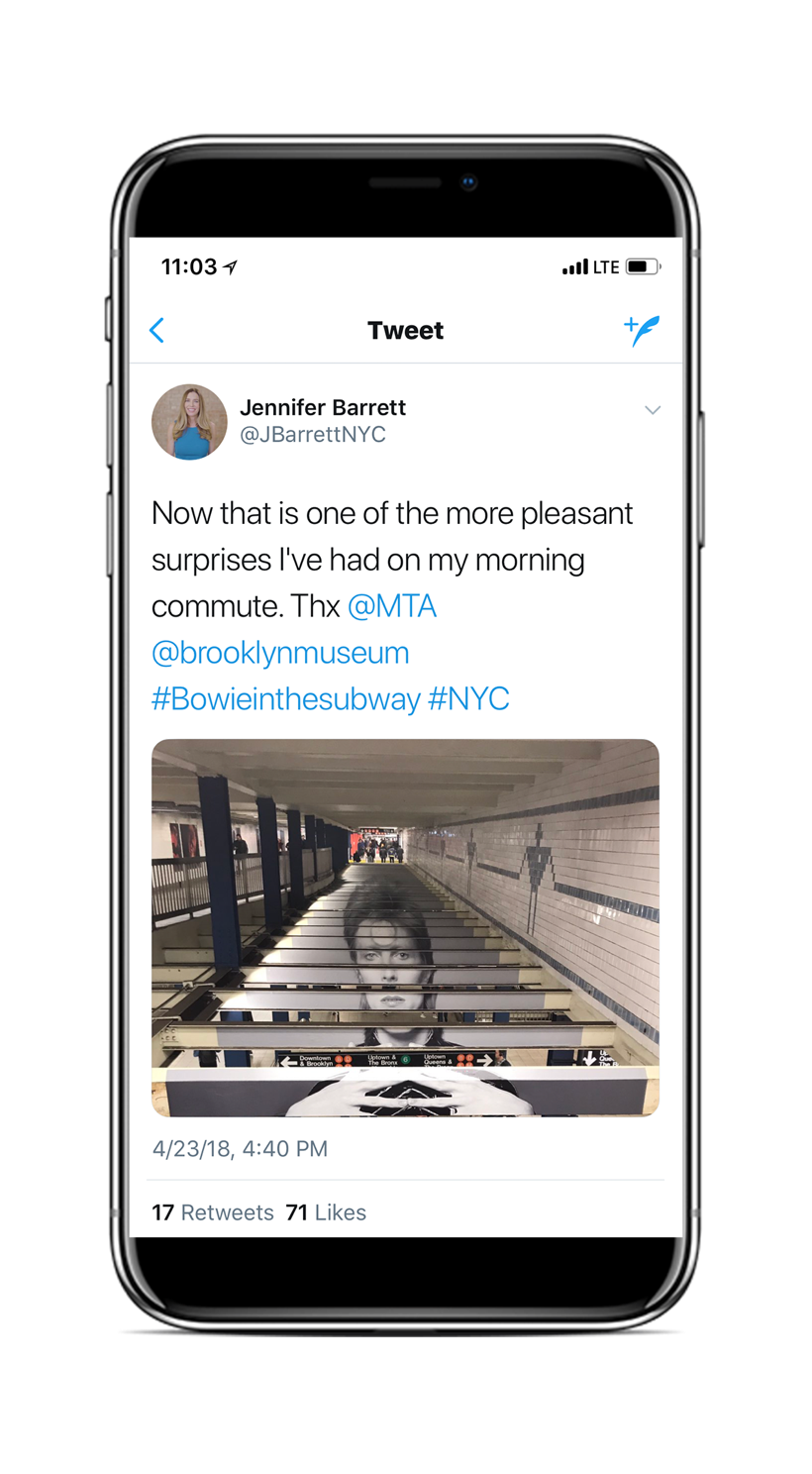 Consumers are 86 percent more likely to recall an ad that relates to their environment.  Placing a witty ad in the right location at the right time has the power to capture your audience both online and IRL.  Postmates ran their "We Get It" outdoor campaign in New York City and Los Angeles, using clever taglines that any average New Yorker or West Coaster could relate to.

"When you don't want to see something, or say something, but you do want to eat something.  Food.  We get it."

"For your consideration: Eating falafel in pajamas.  We get it." 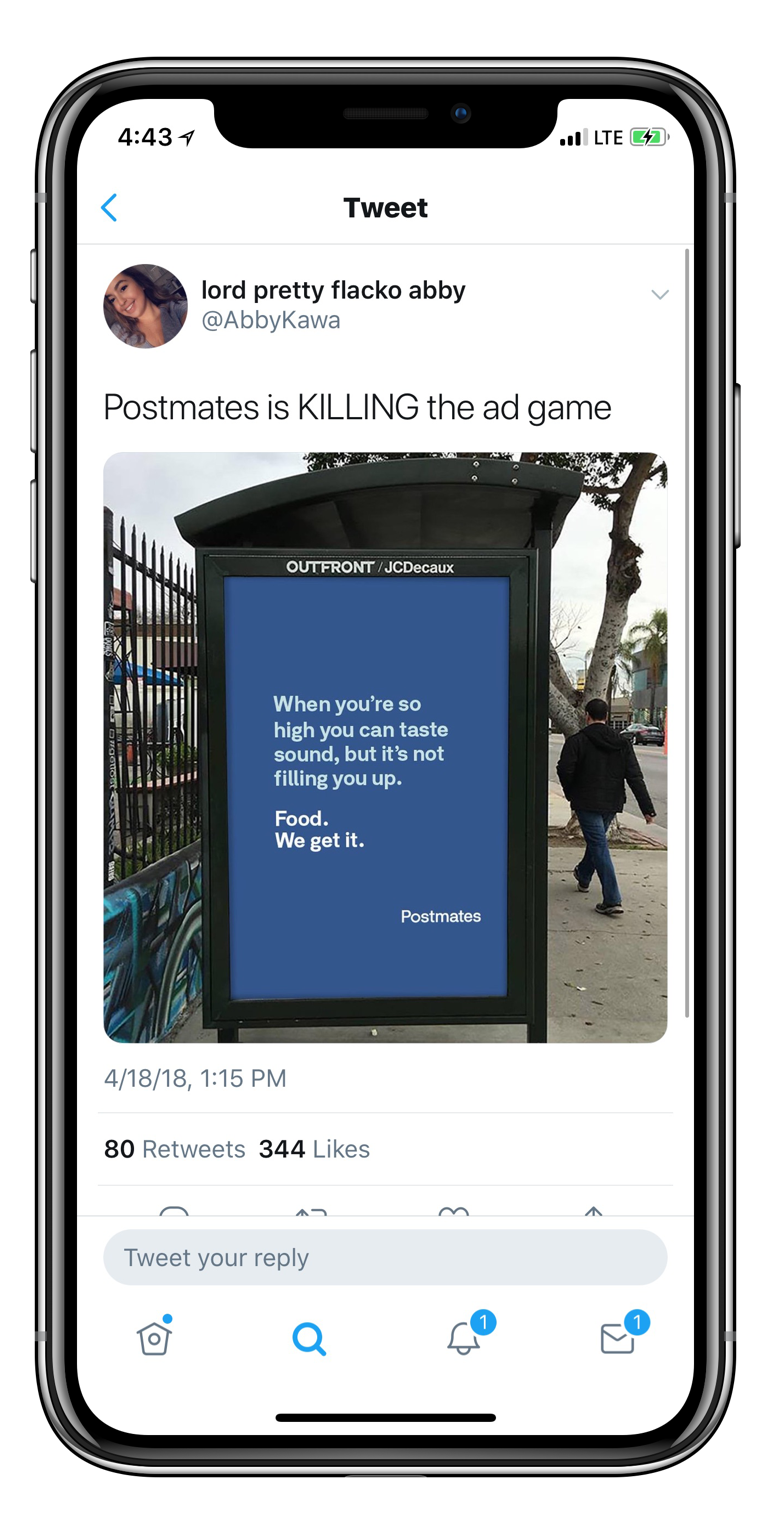 The social response was huge.  Over 297 million total social impressions were reported during the campaign, which then translated to a nine percent lift in brand awareness and a 10 percent lift in app usage.

One advantage of having phones in our hands 24/7 is that we don't miss an opportunity to create content.  OOH taps into that by providing consumers with large canvasses that can be easily captured and shared in an instant.  But it's important to realize that people don't take pictures of just anything and that's why what you do with your creative is extremely important.  OOH that is simple, innovative and eye-catching will almost certainly end up on social media. 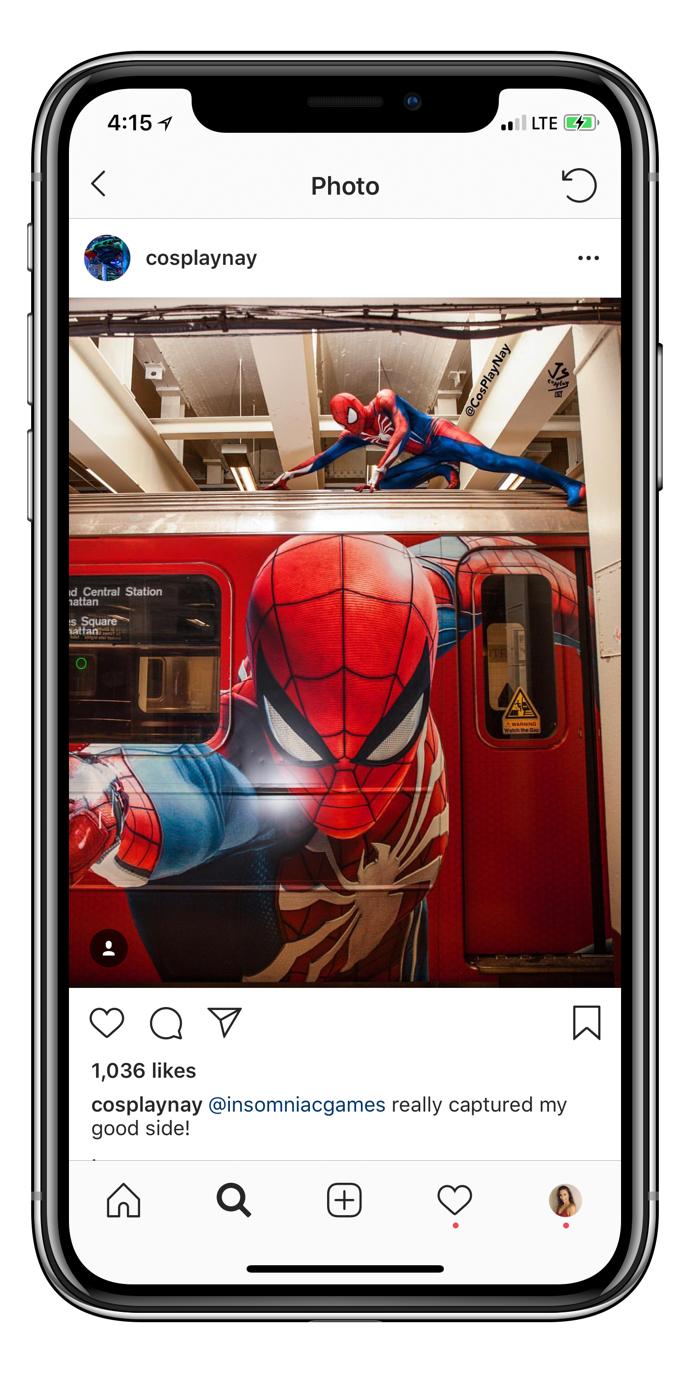 Sony Playstation4 used a shuttle wrap to promote the launch of their Spiderman video game.  They knew their audience would be astonished by a subway completely covered in larger-than-life images of their favorite superhero in action so that's what they created (see photo at top).  Die-hard fans, tourists and even cosplay artists took photos with the campaign and shared it.  The campaign reached more than 2.7 million consumers, spread to an additional 13.5 million and was mentioned in over 10,000 social posts.

In today's age of data insecurity it's becoming increasingly difficult to trust ads.  OOH being 100 percent viewable and permanent in the real world skips over any security risks and helps brands build trust with consumers.  Influencers also do the same.  Therefore, combining the two is an undeniable power force for brands that want to stand out.

As a result of this organic creation of content around OOH, Outfront Media recently announced that it is bringing social influencers to OOH first hand. By partnering with WeAre8, an influencer platform that specializes in connecting high-profile brands with micro-influencers who are skilled at creating and amplifying content, Outfront is demonstrating out-of-home's connection to social media.  This partnership puts the company at the forefront of the industry, extending social media amplification even greater and eliminating the need for a third-party service. 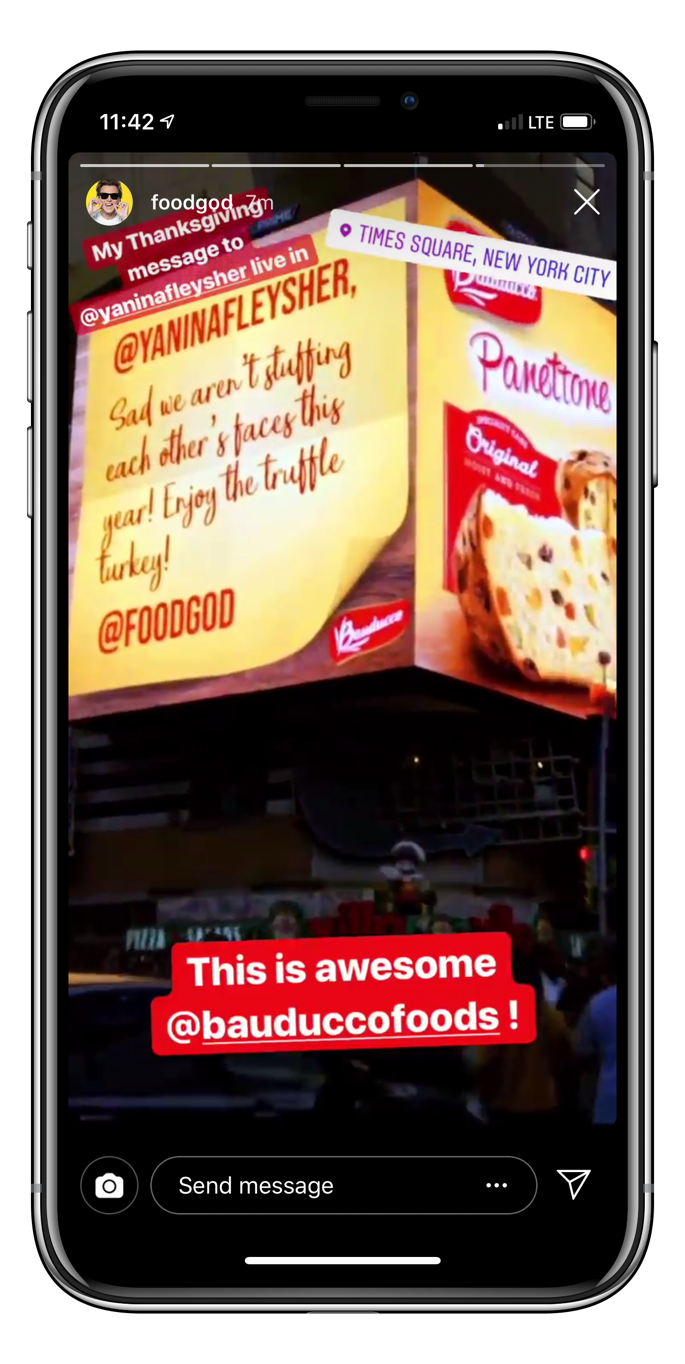 Vital Proteins, a digital brand that relies heavily on influencers and social media advertising, is another brand doing this with their campaign.  They took a step away from their digital presence and ran a huge OOH campaign.  But to stay true to their brand's DNA they featured their army of social influencers in the creative. 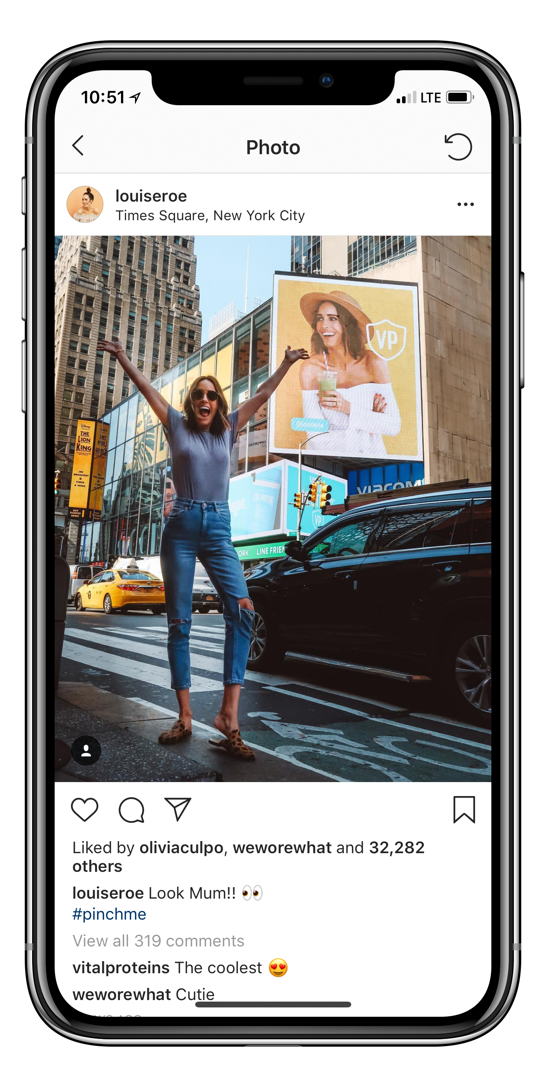 Now you know what you have to do to take advantage of the natural relationship between social and OOH.  I look forward to discussing your amazing results here in six months or so.