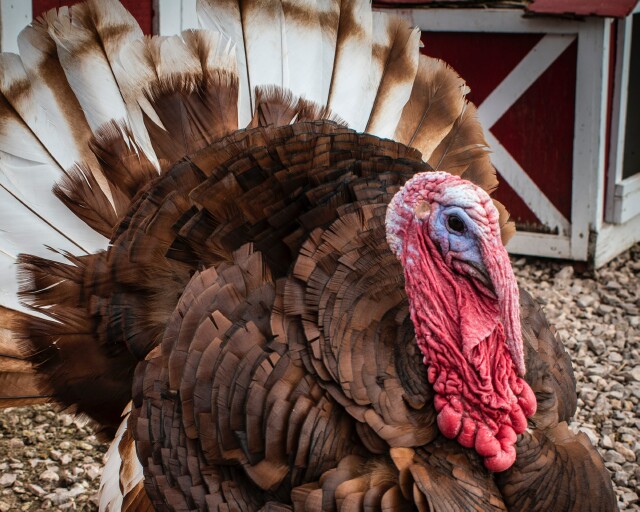 Once upon a time, in a land far away, there lived a widow and her young son. The widow had always been kind to her son, as long as he did what he was told, but woe betide if he stepped out of line! "You can always be replaced," she said to him. "There are plenty of boys out there who would love to come and look after me in return for a warm house and regular meals."

With Christmas approaching, the widow sent her son to the market to buy their Christmas bird. "I want the biggest, the fattest bird you can find. But don’t pay too much for it. Mr. and Mrs. Pool over the field make sure I know what things cost."

The son set off. He had in mind buying a beautiful bird, just big enough to feed the two of them over several meals. He had heard talk of a turkey -- but surely that would be too big. And anyway, how would he get it home?

When he got to the market there was so much on offer. There were beautiful pheasants, plump chickens, even the odd goose. And there were turkeys -- masses and masses of turkeys.

The son remembered his mother’s words: the biggest, the fattest, and don’t overpay. He wasn’t quite sure what that last bit meant, but it was a worry. What if he inadvertently paid too much?

Maybe he should get a free-range organic chicken? Quite big enough, guaranteed to be tasty; affordable but nothing like as big as the turkeys.

The son was mulling over what to do when he saw a stall selling live birds. The birds were nowhere to be seen; he presumed they were round the back, away from the crowds, to stop them running away.

But one was out front, sitting there quite calmly with his face in a book. It was huge, bigger than any bird he had ever seen before. And then it spoke to him.

"You looking for a turkey, mate?"

The son thought this was unusual, but not knowing too much about turkeys he thought he ought to be polite.

"Yes," said the son. "For me and my mother. We want the biggest, fattest bird I can find. And be aware that I know very well what things cost."

"Of course," said the turkey. "I’ll take whatever you've got, and I’ll even give you something back for your trouble. After all, you'll need to get me home, and you'll need to learn how to cook me, won't you?"

At this stage the son started to feel a little anxious. Admittedly he didn't know much about turkeys, but he was pretty sure they didn't talk, or indeed read. Didn't they just go "Gobble, gobble?"

He was also fairly certain they didn't have four legs.

"How come you can talk, and it seems, read? And how come you've not even said 'Gobble gobble?' Isn't that what turkeys do? And whilst I'm at it, what's with the four legs?"

"You're a smart lad," said the turkey. "You don't miss much. I'm an educated turkey; I've gone out of my way to better myself. Yes, I can do the goggle goggle bit – but that's for the tourists, not for smart customers like you.

"The book is my escape," he continued. "If you lived with the idiots I live with you would do anything to get away, even if only in my imagination.

"And as for the legs, I've evolved. I've had to; after all, how else are customers going to get me home?"

"Fair enough," said the son. "But hang on, what's this goggle goggle? I have never met a turkey before, but all the ones I've read about say 'gobble gobble.'"

"Well," said the turkey, "maybe in learning a new language my natural diction has slipped a little. I have to admit I rarely have any call to speak turkey. Like I say, I live with idiots."

"Let me get this clear," said the son. "You'll accept the little money I have; you'll walk home with me; you'll give me some of my money back (and you won't tell my mother, or she'll have that off me in a flash); you'll tell me how to cook you; and you'll taste delicious."

And so, they set off. The son feeling pleased with himself, the turkey goggling away under his breath.

The son rushed in to tell his mother the good news. "You've done well, son. Let me take a look at this beautiful bird, and let's get it into the oven."

The son took off his coat.

So did the wolf.

Allegorical fairy stories involving widowed mothers, naïve sons and animals in disguise rarely end well -- and this one is no exception.

The Cog Blog will be back in the New Year.