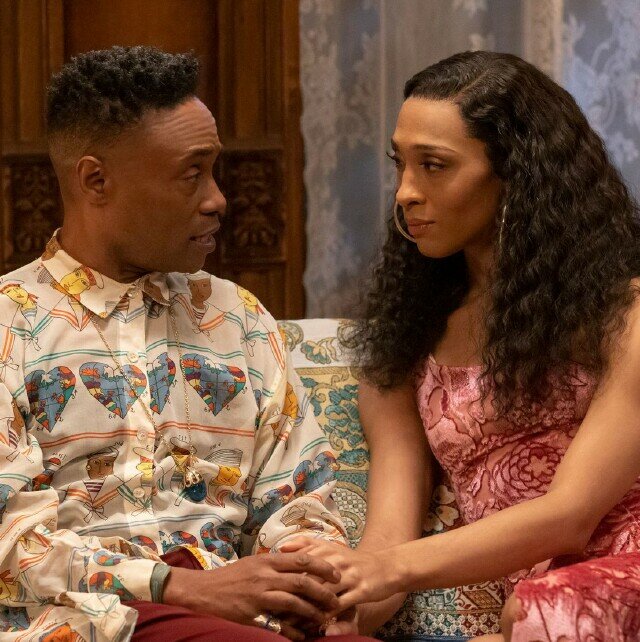 From day one, FX's Pose did nothing less than fearlessly take chance after chance -- while also taking absolutely no prisoners. This revelatory and empowering story came to an end this past Sunday night, and after three amazing seasons, I can say that this is one of the few shows that I finished in its entirety without an ounce of regret. It left me wanting more, and yet it was perfect just as it was. The unprecedented ride we all took with Blanca, Elektra, Pray Tell and the gang was an epic one that was absolutely bursting with passion, flavor and some lessons about self-love and living one's truth that pretty much everybody could use right now.

Created by Steven Canals, Brad Falchuk and Ryan Murphy, Posetook viewers deep into the gritty and glamorous world that was the 1980s ball culture scene, but that was far from all that it was about. Pose was about the gay and trans community’s fight for equality. Pose was about the AIDS crisis. Pose was about never letting anything extinguish that fire in your soul, because that fire is what makes you you. And as intoxicating as all that may be, the true essence of this series in fact lied within the people this story was about, and the uber-talented performers that brought them all to life.

Mj Rodriguez (top right) did a terrific (and in many ways unprecedented) job of giving us a Blanca who not only came into her own as an individual, but successfully embraced her role as a house mother to her chosen family. She didn’t always have a plan or know what to do all the time. (Who among us does?) But she persevered because of the one thing she always ultimately held on to: Hope.

One of the trickier feats this show pulled off, especially over the course of its third and final season, was been the way it managed to fundamentally change my opinion of Elektra (played by the indomitable Dominique Jackson). I remember thinking she was the worst during season one, and that feeling lingered even through the second season. Season three, however, used flashbacks to round out Elektra's fiery and abrasive demeanor with endearing moments of intense struggle and selflessness that just obliterated the monstrous image I once held of her.

There's a moment during one of those flashbacks when a younger Elektra returned to her estranged and closed-minded mother’s house to retrieve a trunk she was forced to leave behind. During a confrontation with her, it seemed for a moment that her mother had grown as a person and may finally have been able to accept her child for the person she truly was. That is, at least until she asked Elektra to "tone it down a little" in return for her supposed acceptance. Elektra then proceeded to fire back at her mother in one of the most mature and character-defining bits of dialogue I've heard in a long while.

"No! I don’t think so!" she replied to her stunned mother. "My whole life is dedicated to toning it up, about settling for more. More love, more finery, more jewels, more power, more money. More, more, more! I’m sorry that you are only able to look upon me in fear and disappointment. I'm sorry that you won’t allow yourself to see me. The pain of your disapproval will no longer distract me from going after everything I deserve in this world. Goodbye, Tasha." Between that monologue and her sudden successful business relationship with the mob, I finally saw Elektra for the incomparable boss bitch she's always been.

Speaking of incomparable beings, there’s the matter of one Billy Porter (top left), the force of nature behind his now-legendary onscreen alter ego, Pray Tell. The compassionate and combustible Pray was always a pillar of the series, but his character's alternately joyful and harrowing journey truly took center stage over the course of this season. His battle with depression and alcoholism was a gripping experience, but it was also an interesting dive into what happens when the traditional thinking of some elders in the Black community collides with open homosexuality and the cold realities of the HIV/AIDS epidemic, especially when it comes to family.

In my favorite episode of the final season, "Take Me to Church," Pray returned home to inform his mother of his fatal prognosis. The story was as profoundly emotional and thought-provoking as any in the history of this show -- and at the end, as always, it was all about love. But equally exciting to me was the casting of the women playing his mother, aunt, and their church friend: Anna Maria Horsford of The Wayans Bros,Jackée Harry of Sister Sister and Janet Hubert of The Fresh Prince of Bel Air, respectively.

During a conversation with Hubert's character Latrice, she points to a classic depiction of the white Jesus Christ hanging on the wall and says, "What does that mean?" Pray responds. "That even in their own churches, Black folk worship a white man." Clever stings like that litter the episode, and not in the name of unjust criticism, but instead in an effort to display yet another aspect of Pray’s internal pain.

Pose showed us that the most important thing is not only self-realization, but also a support system; a family. Throughout all the injustice, and oppression, and pain, the people that formed the community depicted in the show had each other's backs. That's not to say they never fought -- ninety percent of what was entertaining about the show was all the head-butting drama -- but, at the end of the day, it was all about the realization that life is even harder without having people around who are willing to be there for you whether you want them there or not. That's family ... and that's what pulled everyone through.

Pose was three seasons of unadulterated pride, and it's one ball I wouldn't mind attending again.