A Fond Farewell (for Now) to "American Idol" 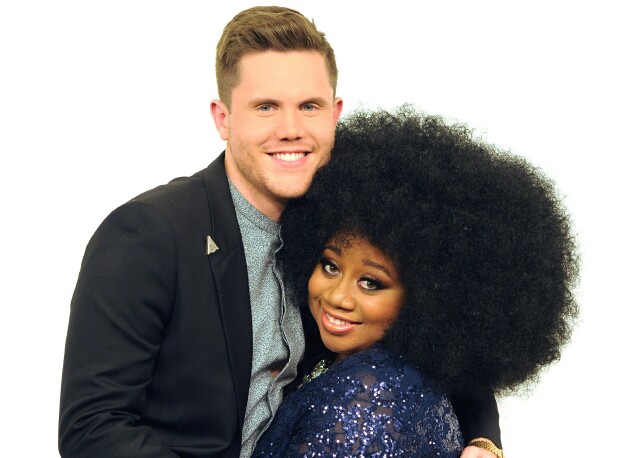 La’Porsha for the win! Even at the last, “American Idol” can get me (and millions of others) caught up in the excitement of it all. Say what you will about Fox’s most formidable franchise -- which isn’t the powerhouse it once was but is still one of television’s strongest and most popular shows -- but never forget that during most of its first ten years it plowed through primetime television like Godzilla in Tokyo, damaging or demolishing everything in its path. We haven’t seen a scenario like that since and odds are we never will again.

And so it is with great wistfulness that we must say goodbye tonight to a pop-culture phenomenon that made people smile again after the horror of 9/11, ushered in interactive television, revitalized interest in the reality competition genre and in summer programming (where “Idol” began), prepped generations for immediate communication via new technologies, flipped the music industry onto its back and launched the careers of more major and minor stars (you know who they are) than any other talent contest in the history of talent contests. I, for one, can’t imagine the last 14 years without it. That’s likely true of many a current and former television executive, as well.

Ever since the announcement last year that this season would be the last for “American Idol” I have repeatedly written that a household name and top American franchise of this magnitude should not be discontinued. If Fox no longer wants it (a decision I think it will regret) it seems to me that another broadcast network, a cable network or a streaming service should snatch it up, strip it down (to its former no-frills essentials) and enjoy the ride all over again.

Now comes word via the Hollywood Reporter that “Idol” may indeed be back. I can’t wait to learn what that’s all about.

Meanwhile, as the minutes are counted down today to the last blast of “Idol” on Fox, I’m happy to see that it will be going out in fine form. I am not talking about the cavalcade of former winners, judges and popular contestants who did not win (from Jennifer Hudson to Sanjaya Malakar) that has been promised for tonight’s historic live telecast from the Dolby Theater. (The Hollywood and Highland shopping and entertainment complex, where the Dolby is located, must be a madhouse today.)

Rather, I’m referring to the combined impact made by the top two contestants this season – La’Porsha Renae (my pick to win from day one) and Trent Harmon. Check them out at their respective best above and below. (I would have preferred to see Dalton Rapattoni up there with La’Porsha, but he went home last night. I think he’s one of those “Idol” wannabes – like Adam Lambert and Chris Daughtry – who is going to have a career if he gets with the right people. See why farther down.)

La’Porsha and Trent were both pretty incredible last night. (Somebody should put them together for an album of duets.) I think they are the most potent Top 2 since David Cook and David Archuletta and, before them, Carrie Underwood and Bo Bice or “Idol’s” original dynamic duo, Kelly Clarkson and Justin Guarini.

That said if La’Porsha isn’t crowned the 15th and final Idol tonight the last season, like several before it, is going to end all wrong.

But that’s the thing about “Idol.” When it grabs you – when one or more of its competitors makes an essential emotional connection with the audience – it is still one of the best things on TV. And sustaining that emotional connection is the way any “Idol” wannabe can leverage a career. That’s much easier to do today with YouTube and social media than it was back at the beginning, but early contestants like Hudson, Daughtry, Archuletta, Constantine Maroulis, Katharine McPhee, Kellie Pickler and Josh Gracin managed to do so anyway.

“Idol” lost its steam (and its way) not because of a perceived decline in the raw talent of its participants (as some have insisted) but because of its producers’ endless efforts to gum it up, which included the addition of superstar judges, the periodic expansion to four judges (which slowed the show to a crawl), the redesign and expansion of a once modest studio into a cavernous (and impersonal) Vegas showroom and (worst of all) the movement of much of the studio audience right up to the lip of the stage – a distraction for home viewers that made it feel as though the show was being produced for a relative handful of people in the room rather than the millions of potential viewers and voters at home.

And then there was the ever-changing voting system, which lost me long ago.

Tonight, though, I’ll shove all that aside and just enjoy the show. Millions of people will do the same. And tomorrow we’ll awaken to an (at least temporarily) “Idol-less” world for the first time since 2002 as we wait for YouTube, NBC's “The Voice” or any social media platform to actually produce a star of multi-generational appeal who can stand alongside Kelly, Jennifer, Carrie and the rest. Don't hold your breath.