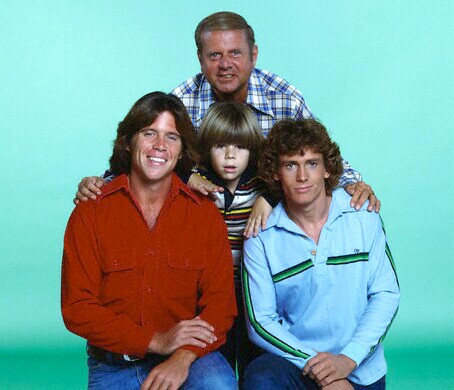 If space permitted, I would have titled this column A Fond Farewell to Dick Van Patten (And a Great Big Thank You for the Memories), because just thinking about the man (something I hadn’t done in quite a while) has brought back memories of so much of the joy that I had (along with millions of other people) watching broadcast television in the late Seventies.

I don’t think of Van Patten (pictured at top with his TV sons Grant Goodeve, Adam Rich and Willie Aames) as one of the giant stars of my long-ago youth, but as is often the case these days when I hear of the passing of an actor from a series I never missed (back when broadcast ruled the world), I nevertheless felt a sense of loss this week with the news of his passing.

Van Patten wasn’t in the same league of outsize pop-culture greatness as Henry Winkler, Ron Howard, Farrah Fawcett, Kate Jackson, Jacklyn Smith, Penny Marshall, Cindy Williams, John Ritter, Suzanne Somers, Robin Williams, Lindsay Wagner, Lee Majors, Billy Crystal, Hal Linden, Kristy McNichol, Donnie Osmond and Marie Osmond, but he certainly belonged in the company of those stars and the many others who made ABC the place to be in the mid- to late Seventies. (Geez, just pulling those names from memory and writing them in the same paragraph has me feeling instantly nostalgic for a time when most things in life were far less complicated than they are today, with the exceptions of television and the media, which grow maddeningly more complex with every passing year.)

Maybe his character of Tom Bradford, the loving husband and father of eight on ABC’s “Eight is Enough,” which ran from 1977-81, is not exactly iconic in the way of the Fonz or Richie Cunningham. Van Patten nevertheless played a crucial and unforgettable role in creating and sustaining the dazzling environment that defined ABC during those years, one that fully took shape when the legendary programming executive Fred Silverman moved over from CBS in 1975.

ABC hadn’t exactly been languishing during the first half of that decade, not with such classics in the making as “The Brady Bunch,” “The Partridge Family,” “Room 222,” “The Odd Couple” and “Love, American Style” powering what would be one of the most enduring and unforgettable nightly lineups in the history of television. Those were the shows that gave ABC a formidable Friday, which was formed at the same time as CBS’ legendary Saturday -- “All in the Family,” “M*A*S*H,” “The Mary Tyler Moore Show,” “The Bob Newhart Show” and “The Carol Burnett Show.” (Geez, just typing those titles gives me chills, but I guess you had to be there.) Significantly, that splendid Saturday lineup came together under the auspices of Silverman during his tenure at the Tiffany Network, along with so many other strong shows and nightly schedules.

But then ABC’s fortunes began to fade and Silverman moved on over, very quickly turning his new network into one with programs (including the mini-series “Rich Man, Poor Man” and “Roots”) as powerful and popular and influential as his shows had been at CBS. There was a significant difference: Overall, the ABC lineup became essential viewing throughout the week for kids, teens, young adults and families. This lasted for years, and there hasn’t been anything like it since; not even during NBC’s rebirth in the Eighties, built largely around its Thursday night Must-See TV shows.

Those mighty ABC shows included “Happy Days,” “Laverne & Shirley,” “Soap,” “Charlie’s Angels,” “Starsky & Hutch,” “Family,” “Donnie & Marie,” “Barney Miller,” “Three’s Company,” “The Six Million Dollar Man,” “The Bionic Woman,” “The Love Boat" and “Fantasy Island,” among others. Van Patten was right there in the middle of it all – literally in the middle, with “Eight is Enough” running on Wednesday night. 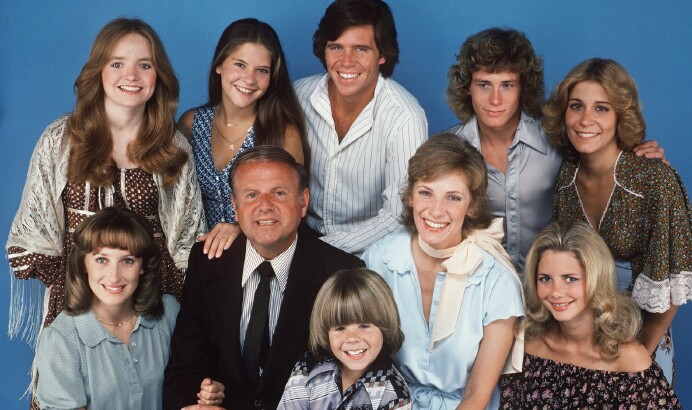 While almost every show on ABC at the time was considered family friendly -- except perhaps for “Charlie’s Angels,” the show that (along with “Three’s Company”) inspired the unfortunate and unforgettable phrase “Jiggle Television” -- “Eight is Enough” was one of two on the network that was literally about a family in every way. “Eight” had its serious moments, but it was relatively light and lesson-driven when compared to the seriously dramatic narrative of the other in its genre, literally named “Family,” which explored all manner of serious issues. (Geez, just thinking about “Family” makes me realize how much I would enjoy bingeing my way through its four seasons. That show was ahead of its time in so many ways. Does anyone remember that the legendary Mike Nichols was one of its executive producers, along with Aaron Spelling and Leonard Goldberg?)

In hindsight, I think it is only right to include Van Patten's warm and wise Tom Bradford in the company of such all-time great TV dads as Ozzie Nelson (played by Ozzie Nelson on “The Adventures of Ozzie & Harriet”), Jim Anderson (Robert Young on “Father Knows Best”), Ward Cleaver (Hugh Beaumont on “Leave It to Beaver”), Andy Taylor (Andy Griffith on “The Andy Griffith Show”), Steve Douglas (Fred MacMurray on “My Three Sons”), Alex Stone (Carl Betz on “The Donna Reed Show”), John Walton (Ralph Waite on “The Waltons”), Mike Brady (Robert Reed on “The Brady Bunch”), Tom Corbett (Bill Bixby on “The Courtship of Eddie’s Father”), Charles Ingalls (Michael Landon on “Little House on the Prairie”) and Cliff Huxtable (Bill Cosby on “The Cosby Show”).

It is interesting to note that Van Patten was a household name in the Seventies not only because of Dick’s work on his show, but because his son, actor and tennis pro Vincent Van Patten, was a young heartthrob of the day. Today, Vincent is married to Eileen Davidson, one of the stars of “The Real Housewives of Beverly Hills.”