A Letter from Grant Tinker Changed My Life 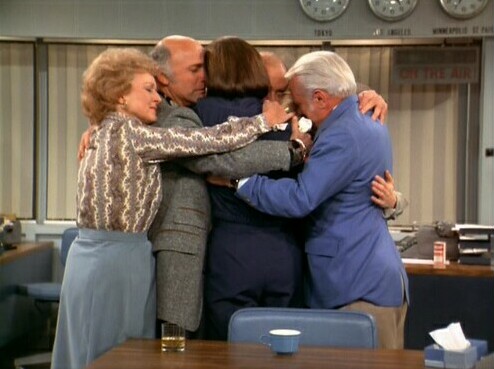 The loss of Grant Tinker this week feels very personal to me – even though I never even met the man, and not because so many of the shows he was responsible for in the Seventies and Eighties, either as President of MTM Enterprises or Chairman and CEO of NBC, meant so much to me. How could they not? Without Tinker we may very likely never have enjoyed The Mary Tyler Moore Show, The Bob Newhart Show, Rhoda, Phyllis, Lou Grant, WKRP in Cincinnati, Hill Street Blues, St. Elsewhere, The Cosby Show, Family Ties, The Golden Girls or Cheers, among many others. Those shows weren’t just popular hits of their time – they were masterful for their day, many remaining so to this day – and most of them, during their first runs, advanced television in a way that few comedy or drama series have since, at least on broadcast television. (That's the famous group hug from the last scene of the MTM series finale above. It seems very appropriate here.)

Tinker’s death doesn't just have me recalling thousands of hours of smart television entertainment, or feeling the inevitable passing of time. It also has me thinking about my life. He never knew it, but he did as much to steer me toward my eventual career path as anyone else.

You see, back in my youth, when I was so enamored of his shows – especially Mary Tyler Moore and Bob Newhart – I decided that I, too, wanted to create quality programming for the most exciting medium that ever was or, I was sure at the time, ever would be. I had a great idea for a sitcom, which I had mapped out over four 26-episode seasons, and which in its fifth season would split into four shows consisting of the mothership (reworked into something new) and three spin-offs. What's more, in defiance of traditional network scheduling, those four half hours would share one hour of primetime real estate, running in rotation. I thought it would be revolutionary. So what if I was still in school? I knew I had a winner, and I was sure Tinker would think so, too.

I could fit on one line of a small note card my full knowledge of the TV pitch process at the time, which then as now was shrouded in mystery and illusion. All I really knew was that one could not pitch an idea directly to anyone at a network for fear (on that end) of an eventual opportunistic lawsuit. (Again, some things never change.) So I created a comic strip about me, filled with characters talking about me and raving about my idea for a TV show without betraying even a hint of what it would be about.

Maybe I should have been a cartoonist: Tinker was so impressed with my comic strip that he sent me a very personal letter, on his embossed MTM stationery, which I treasure to this day. (This is a timely opportunity to note that I also have a personal note from the very dear Florence Henderson, who was prompted to write after she laughed out loud reading a column I wrote about a particularly volatile day at a TCA tour she had attended many years ago. What a great lady she was.)

The address on the letter from Tinker was 4024 Radford Avenue in Studio City -- the West Coast home of CBS. I have been to that sprawling lot many times, but it was only during my last visit, just five months ago, that I came upon the CBS Walk of Fame (pictured below). As you can see, many of Tinker's shows are prominently displayed there.

The letter from Tinker reads as follows:

Thanks very much for your very unusual method of letting us know that you have created a situation comedy series that you would like MTM to consider.

Please forgive this much less creative and much ruder communique which I send along to let you know that we are absolutely “out of business” as far as new program development is concerned. In fact, if we have a little good bad luck, we’ll lose a couple of our current projects and thereby shrink our activities down to a pleasantly manageable size.

I’m sorry to pass along that answer, but I’m sure you’ll agree that a definitive “no” is better than a fuzzy “maybe.” I do wish you better luck with your brainchild elsewhere.

Thanks again for both your letter and your interest.

Just looking at this letter brings back so many memories. Imagine: Decades ago Grant Tinker held this piece of paper in his hands, at least when he signed it. I’m so glad I kept it -- and so many other cards, letters and notes I have received throughout my life. They feel so much more personal and emotionally connective than old e-mails.

The experience of finding an envelope in the mail from MTM Enterprises was one of the most exciting of my young life. (For many generations snail mail was filled with such glorious moments. Today, not so much.)  I was too busy being thrilled by the fact that Tinker actually replied to me to be put off by his dignified rejection. Instead, I wrote another episode of the comic strip about me and sent it off to Fred Silverman, who was then President of ABC. My skills as an artist and storyteller must have improved in the brief period between the two letters, because before I knew it I was sitting in the New York City office of one of Silverman’s top programmers pitching my show. And then I was sent off to meet with a producer about actually producing it. And I was still a teenager!

Obviously, I did not grow up to become a successful producer of television programming. But from the moment I received that letter from Tinker I knew that the television business and I were fated to be mated in one way or another. Even without this experience, though, I can’t imagine what life would have been like had I not been able to enjoy so many of his programs in their first-run glory. This is especially true of The Mary Tyler Moore Show, which I will always believe to be the best television show in the history of the medium.