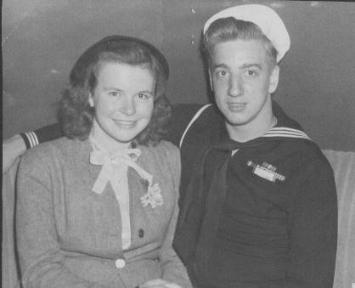 Editor's note: This column, published once again in honor of Veteran's Day, was originally published on September 28, 2007 and was timed to the premiere on PBS of Ken Burns' masterpiece The War. Bill Wright, a hero you will come to know below, passed away two years ago. He was predeceased by his loving wife Margaret, who is also part of Bill's remarkable story.

At the start of the seventh and final installment of Ken Burns' landmark documentary The War, Seaman First Class Maurice Bell of Mobile, Alabama, describes in deep detail what it was like to be on the U.S.S. Indianapolis when it was struck by a Kamikaze on March 31st, 1945 in the Pacific theater. Nine sailors died on the Indianapolis that day and 29 others were wounded. The Indianapolis was sent to Mare Island off San Francisco for repairs.

Bell's story, and the breathtaking footage of the Kamikaze strike that accompanies it, is just one of dozens of extraordinary events chronicled in Burns' seven-part film. For many viewers it will be the first time they hear a first-person account of the horror of a Kamikaze attack, but it was chillingly familiar to me. My next-door neighbor of the last ten years, Bill Wright, is another World War II veteran who survived a devastating suicide attack. He was serving his country on board the aircraft carrier U.S.S. Belleau Wood CVL-24 at the time.

Bill's war story is one of thousands that are not included in Burns' masterpiece. Of course, every person who served in World War II (and every person who waited for a beloved family member or friend at home) has many stories to tell about his or her experiences during that turbulent time. Many of those stories have already been lost, but as Burns' film makes clear, it is critically important that as many as possible be documented and remembered by generations to come. (Certainly this is true of all war stories, including those of military personnel currently serving in Iraq.) We cannot do enough to preserve and honor as many of those stories as possible.

The War is largely structured around the personal stories of four WWII veterans, including Maurice Bell, and that's what makes it stand out from the hundreds of documentaries about the same subject matter that have come before. Most stories about the Second World War are told from a broad point of view -- detailed stories about individual valor are almost never heard. That's due in part to the fact that so few veterans of the war ever speak about the things they saw or did while fighting for freedom. As the harrowing details of so many of the stories told in The War make clear, wartime violence is more than anyone should ever have to endure or carry in their memory. For these and other reasons, most veterans of World War II chose never to speak about their experiences once they returned home.

Bill Wright, who is now 82 years old, has spoken very freely about his experience on the Belleau Wood during the decade I have known him, but he recently told me that he only started opening up about it when he was in his sixties. He didn't talk about the attack on his ship for more than forty years. When I asked him why, his response was a simple, "I just didn't." 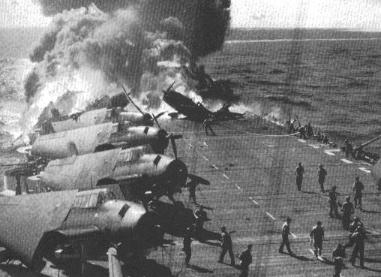 Bill and one of his fellow seamen were at their stations in a small room below deck that housed controls for the ship's sprinkler system, which happened to be very near the point of impact. Their petty officer had been killed when the plane hit. As the room began filling with smoke, the door opened and two officers appeared with a wounded 17-year-old seaman. Amid the chaos and the carnage, Bill was ordered to tend to the injured young man. He was 18 years old at the time and had no medical training.

At first, Bill couldn't tell where the younger man had been injured. Upon closer inspection, he realized that the "kid" (as Bill now refers to him) had an enormous hole in his side.

Here's a part of the story that I have not been able to shake since I first heard it, many years ago. As the injured young man lay on the floor crying out for his mother, Bill looked into the wound and saw what appeared to be "two hard-boiled eggs" inside his body. He later learned those were the man's adrenal glands.

After calling the bridge and seeking medical advice, and barely able to see through the smoke around them, Bill and the other seaman in the room administered morphine to their injured shipmate. Then they poured sulfur powder into the wound, packed it with "about 30 small cotton pads" and taped it over, while also following orders to operate the ship's emergency sprinkler system. The injured man survived.

There are other parts of Bill's story I cannot forget: Gathering the bodies (and body parts) of the deceased, cleaning the blood and viscera from the deck once the fire was out, and the mass burial at sea the following day. 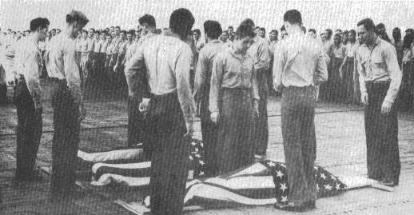 The burial date, October 31, was Bill's mother's birthday. While Bill has never remarked about the fact that he narrowly escaped injury or death that day, he recently said to me, "Wouldn't it have been horrible if my mother leaned that I had been buried on her birthday?" (In fact, Bill was able to return home to Bridgeport, Connecticut, for a brief family visit two months later. He arrived at his mother's doorstep at 9 p.m. on Christmas Eve.)

Remarkably, the story of Bill's time in hell has a spectacular happy ending. Following the attack, the Belleau Wood was sent to San Francisco for repairs, and while walking on Market Street on leave one day he met Margaret Ehlert, the woman who would become his wife seven months later. They celebrated their 62nd anniversary this year. (The photo at the top of this article was taken during their second date, in December 1944.)

Bill never returned to sea after the attack on the Belleau Wood. He was transferred to Alameda Naval Air Station outside of Oakland, California, where he served until the end of the war in August 1945. He left the service with nine battle stars, a Presidential citation, a Philippine Liberation Medal with two stars, a Philippine Independence Medal, an American Area medal, a Victory Medal and a Halsey's Commendation Bar (the latter for saving the life of the injured man on the ship).

When I marveled at all of the awards he had received, Bill smiled and replied, "They never put food on the table."

Then he quietly added, "War is hell." Bill spoke those words with such conviction it was as if I had never heard them before.

If you caught the first four installments of Burns' epic production this week you have already been reminded that war, though sometimes necessary, is always hell. If you missed them, catch them in repeats or on DVD, and make it your business to watch the three concluding episodes on Sunday, Monday and Tuesday. You will not regret the commitment.